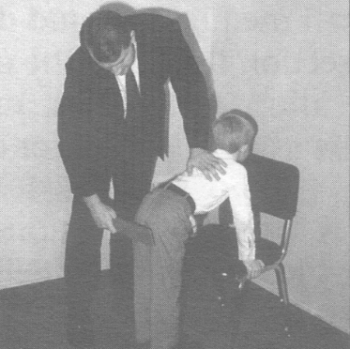 With Christian groups leading the opposition to Scotland's new smacking ban, Alistair McBay explores the many instances of Christian schools and campaigners demanding the ability to spank children as a religious or even biblical right.

This week the Scottish Government announced that spanking or smacking children is to be banned, in a move that will make Scotland the first part of the UK to outlaw the physical punishment of children and give them the same legal protection as adults. At present, parents in Scotland can claim a defence of "justifiable assault" when punishing their child, although the use of an implement in any punishment is banned, as is shaking or striking a child on the head. There are no bans on smacking in England, Wales and Northern Ireland, where parents are currently allowed to use "reasonable chastisement".

In recent radio discussions on the proposal, the view of the Christian community in Scotland was sought from the Reverend David Robertson, the former Moderator of the Free Church of Scotland and the apparent go-to person as far as BBC Scotland is concerned for comment on matters Christian. You can read more about the Reverend here and here. It's perhaps fitting that a fundamentalist Christian view is sought given the wealth of advice available to Christians on how to chastise a child, and the legal and 'human rights' attempts that have been made by UK Christians to get exemptions from legislation. A simple Google search using terms such as 'Christian spanking' reveals a plethora of guides, commentaries and references on how to smack and 'chastise' children, often citing Scripture as authority. While there is no suggestion that the Reverend Robertson condones or supports any of the practices that follow, it is clear that a wide range of Christian views is available. Perhaps the best known is the No Greater Joy ministry run by Michael & Debi Perl and their notorious book 'To Train Up A Child'. Here is a current sample of their methods on 'chastisement' from their web site:

"The most painful nerves are just under the surface of the skin. A swift swat with a light, flexible instrument will sting without bruising or causing internal damage. Many people are using a section of ¼ inch plumber's supply line as a spanking instrument. It will fit in your purse or hang around your neck. You can buy them for under $1.00 at Home Depot or any hardware store. They come cheaper by the dozen and can be widely distributed in every room and vehicle. Just the high profile of their accessibility keeps the kids in line."

Below I offer just four more examples. But as in so many things, it seems that Christianity is unable to agree within its practitioners when it comes to the chastisement of children. It is appalling to think that in this 21st century with all its revelations of child abuse by clergy and religious, there are nonetheless Christian leaders who have and presumably still do maintain that having access to children's bottoms to hit them with wooden spoons or plumbing pipe is 'a biblical right'.

Christian Fellowship School, Liverpool, and 39 others

Legislation passed in 1998 outlawed corporal punishment in all schools, including independent schools which had previously been able to set their own rules on discipline. However, headteachers of 40 independent Christian schools claimed this ban breached "religious and parental" rights and took their complaint to the European Court of Human Rights in Strasbourg in 2002. Philip Williamson, headteacher of the Christian Fellowship School in Liverpool which led the campaign, said that the Government was:

"stopping parents from selecting a school which reflects their philosophical beliefs. The state has no right to interfere with the upbringing of children in the family unless there is some sort of assault or abuse going on".

He rejected any claim that using physical force as punishment was un-Christian, stating that:

"corporal punishment has been part of Judeo-Christian heritage since time immemorial, to instil a moral code so that children can make moral choices and later become responsible adults".

Parents of the 200 pupils at Williamson's school were required to sign a consent form allowing teachers to use physical punishment which took the form of a smack on the hand or "on the rear with a wooden ruler".

Williamson said he was ready to ask mothers and fathers come in to the school to smack youngsters as a way of getting around a possible legal ban:

"Obviously, nobody wants to go down that route. We want to comply with the law but the Government is very close to undermining Christian rights within the country."

The appeal to the ECHR failed.

Focus on the Family

There is such a thing as an itemised biblical approach to spanking. Here is one outlined by the US ultra-conservative group Focus on the Family. Its 7-step guideline to physical chastisement begins with this statement:

"Regardless of the method, the Bible's word on discipline clearly demands that parents be responsible and diligent in spanking, but strongly prohibits physical abuse of any kind. Obviously, the biblical approach is balanced, reasonable and controlled."

The Focus on the Family guide continues (and the irony of the final sentence should not be missed):

"When you spank, use a wooden spoon or some other appropriately sized paddle and flick your wrist. That's all the force you need. It ought to hurt — an especially difficult goal for mothers to accept — and it's okay if it produces a few tears and sniffles. If it doesn't hurt, it isn't really discipline, and ultimately it isn't very loving because it will not be effective in modifying the child's behaviour. Have the child lean over his bed and make sure you apply the discipline with a quick flick of the wrist to the fatty tissue of the buttocks, where a sting can occur without doing any damage to the body. You want to be calm, in control, and focused as you firmly spank your child, being very careful to respect his body."

Isle of Skye, Scotland, and a 'deeply religious' teacher

In 2007, a teacher and her husband on the isle of Skye, both office holders of the Free Presbyterian Church of Scotland (where the country's top judge Lord Mackay of Clashfern was once an elder) were found guilty of beating two young girls aged 9 and 13, with a leather belt. The teacher was described in court as 'a deeply religious person', and her defending counsel told the court that:

"She had taken a fairly biblical interpretation of chastisement but she went beyond the bounds of reasonable punishment to assault."

Privately, the teacher had been telling locals that she was the real victim (a familiar cry these days from Christian abusers) while the Free Presbyterian Church Moderator said that their Christian beliefs are that:

"We would normally chastise children who required it but it would be an expression of love and attachment, not of violence or temper."

The same Moderator later found fame (or infamy?) by suggesting that a tornado that hit the Isle of Lewis in 2009 was God's punishment for the first civil partnership conducted on the island.

Many NSS members will be familiar with the ACE programme - Accelerated Christian Education – which earlier this year saw nine faith schools teaching its fundamentalist curriculum downgraded by Ofsted following inspections ordered by the Department for Education. ACE schools have taught that homosexuality is unnatural, and they promote young earth creationism. The schools have faced significant criticism from former pupils, and are additionally tainted by historic allegations of exorcisms and "ritual corporal punishment". It will come as no surprise then that it has in the recent past promoted spanking children, as this report from a former ACE pupil shows. In 1998 the ACE guide "The School of Tomorrow Procedures Manual" stated that

and cited four passages from Scripture in support of this claim. In fairness, by 2010 this had changed to

"Corporal discipline should never be used in school".

However, the author of this report, himself a former ACE pupil, went on to list 10 ACE schools from around the world that as recently as 2013 were still clearly proclaiming spanking as a punishment on their websites, using verbatim the wording from the 1998 edition of the ACE manual. Many of the hyperlinks to the schools concerned that appear in this report from just four years ago no longer work, and it seems some schools have changed their names too. But while reference to spanking may now have been removed by some from their web sites, how confident can anyone be that the practice has ceased?