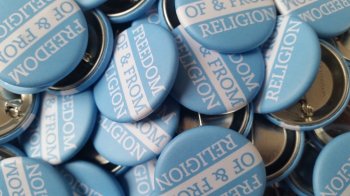 In the past, those who have given their greatest support for secularism have been members of a minority group – the openly non-religious.

It's worth remembering that when the National Secular Society was founded in 1866, atheism was a controversial, subversive and radical philosophy in the UK. Indeed, the freedom to be irreligious had been limited by the UK's blasphemy law, which punished criticism and mockery of Christianity. Producers of the UK's first atheist magazine, The Oracle of Reason (1841- 1843), were imprisoned for writing and distributing its "blasphemous" content. The last blasphemy conviction was in 1977, with the law itself being abolished as late as 2008.

In such a hostile environment, it's no surprise that openly non-religious people have long been the minority. It's also no surprise that this oppressed minority would rally around secularism as a principle that supported their right to live without being persecuted for their beliefs.

Secularists advocate a universalist approach to religion and politics, designed to maximise freedom and equality for all individuals. But in practice, the fact that secularism has been historically championed by atheists means that secularism has long stood as a voice for the minority.

That is, until now.

Recent independent research consistently reveals that the non-religious are now the majority in the UK. I've no doubt that this is in part thanks to greater tolerance towards those who express different beliefs. Our irreligiosity is part of a trend throughout democratic nations worldwide, with an increasing number of people putting less and less emphasis on religion in their lives.

Secularism in the UK now has a renewed purpose. It must now be a voice for the majority.

Never before has secularism been so relevant to the idea of democracy. For in a nation where the majority are non-religious, how can having an established church, and automatic seats in the highest levels of government for unelected religious leaders, be democratic? How can a state-funded education system that discriminates against those of no religion be democratic? How can allowing religious groups special 'opt-outs' from child welfare and animal welfare laws, laws determined through parliamentary procedure, be democratic?

The non-religious are no longer a small minority group oppressed by a 'tyranny of the majority.' They are now a majority oppressed by a distant and unelected elite comprising of religious leaders. And it is the job of secularists to make that majority aware of the many ways in which their government acts time and time again in the interests of that elite, rather than in the interests of the ordinary citizen. It is our job to win the argument for a secular society, and to hold our government and religious institutions to account.

But although the non-religious may be the majority, secularists must still work to protect religious minority groups too.

With the UK's religious and cultural landscape becoming more diverse, an increasing number of people are members of smaller religions that are comparatively new to Britain. Those religions are far less likely to receive the privileges and benefits that the UK's older and more well-established religions get, and so their interests are less likely to be represented.

What's worse, minority religions may be oppressed or persecuted by larger, more powerful religions – Pagans by Christians, or Ahmadiyya Muslims by 'mainstream' Muslim sects, for example. A secular society ensures that members of minority religions are not bullied or silenced by larger religions, and that the basic human rights of people who belong to religions both great and small are equally protected.

And it is often the minority groups within the larger, more powerful religions who find themselves the most in need of the benefits of secularism.

LGBT members, ethnic minority members, members perceived to be of a lower social standing or caste, and reformers who challenge the established tenets or practices of their religion are some of those minorities who may find themselves excluded and discriminated against by the religious institution that claims to represent them. Even subsections who are not a minority, including women and children, may also find themselves disadvantaged within their religious community. Again, secularists must continue to work to make sure their voices are heard, and that they do not suffer from unfair treatment in society.

So on this International Freedom of Religion or Belief Day on October 27th, let us celebrate both the non-religious majority and religious minorities, and reaffirm the need to defend their basic liberties. And let us celebrate secularism, and its fundamental principle of freedom for people of all beliefs and none, as the best model for achieving true liberty and equality for the many, and the few.