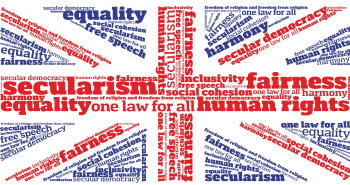 Efforts to promote 'British values' in schools are being criticised, mainly on account of their name, but these four clear values already underpin our education, and are something to which we should aspire, argues Lottie Moore.

In 2014 the government made it obligatory to promote 'British values' in schools.

This response impacted greatly on the ability to implement the new initiative successfully. During a discussion on British values with a group of sixth form teachers, one teacher protested: "But what if one of my students is Scottish? I do not want to use the word British and make them feel excluded."

There are two issues here. Scotland is in Britain (for now anyway). More importantly, this sentiment shows a subconscious adversity to the word 'British' and an alarming inability to recognise 'Britishness' as a point to unite over.

Being British is not, and should not be, something we are ashamed of. Many of us are British and a national of another state, some are British but their parents have another nationality, and some do not have a connection with another nation at all. But what all the above share is Britishness, no matter what other identity they also possess.

The government does not consider any group more British than another. Instead, it gives a set of four core values that we can all sign up to no matter what our other identities may be. These are: the rule of law; individual liberty; mutual respect for, and tolerance of, those of all faiths and none; and democracy. These are the fundamental building blocks of our state and nothing in them should make us feel ashamed or insulted. However, there is a collective feeling of guilt or insult at instilling national identity and pride.

The push from the regressive left to oppose the teaching of British values is so strong that we are now seeing the discourse shift from referring to our values as 'British' to referring to them as 'fundamental'. We are ashamed because to identify as British and especially 'British and proud' has been owned by the far-right. You only need look at the branding of Britain First and the English Defence League. But by embracing British values we are opposing the messages of the far-right and Islamists, who want to divide us through denying religious freedoms and the right we have to be whoever we want to be.

Conversely, to go against our British values is to be hateful and racist. Persecuting people belonging to a particular religion is often rooted in racism, and to oppose the right to individual liberty is hateful. Sadly, some people are so blinded by the word 'British' and the brand the far-right have made out of it that they are rejecting our chance to reclaim this word.

We often hear that it is racist to suggest we are all British, and should therefore embrace British values. But those who suggest not everyone born here is British are also accused of racism – with more justification. The idea of uniting behind our shared values is being attacked from all ends of the political spectrum, leaving people unsure where to stand.

Through reclaiming our identity as 'British' we are allowing for the growth of a collective national pride that we can all share in. In a world now increasingly threatened by divide, not only between cultures and religions but also between increasingly polarised political groups, we are in desperate need of common ground. We have seen politics shift to the right, most notably through the election of Donald Trump and the rise of far-right parties throughout Europe. For those of us who look on in horror at these shifts and fear what the future may bring, it is time to be brave and reclaim the word 'British' for ourselves. By claiming this common ground and uniting in our shared values, we stand up against this polarisation and subsequent division.

If we do not claim the middle ground, we will see the far-left continue to push back against identifying as 'British' whilst shielding communities who do oppose our values from scrutiny and challenge. We see today, and will continue to see, communities harbouring illegal and harmful practices defended by left-wingers who will defend anyone if they can tick the oppressed minority box, regardless of their actions. This phenomenon is known as the 'soft bigotry of low expectations.' As Maajid Nawaz (Director of Quilliam) puts it, "Some say it is unfair to hold disadvantaged communities to rigorous standards. I say it is discrimination to require anything less." Unchallenged, these communities will equip the far-right with arguments that they will use to broadly accuse all non-white British citizens of signing up to these unacceptable practices. And so the perpetual cycle of division and hate, one side fuelling the other, will continue.

The middle ground is kowtowing to the far-left for fear of being branded racist. It is time to make a stand for who we are and what we want before it is too late and we lose our diverse nation to the divisions that threaten to tear it apart.

Lottie Moore is a writer previously published in Conatus News. The views expressed in our articles are those of the author and do not necessarily represent the views of the NSS.