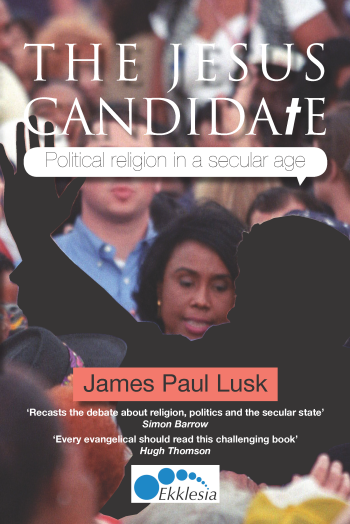 There are two concerns I regularly hear regarding secularism in the UK. One is that secularism is somehow inherently "anti-religious," only serving the needs of atheists. The other is that, with the rise of militant Islamists seeking to impose an Islamic State upon the world, we need to reassert the power of Christian identity/ the Church in order to combat Islamist ideology.

That's why I found The Jesus Candidate: Political religion in a secular age a welcome and timely publication. Written by James Paul Lusk, The Jesus Candidate calls for a "Christian state" by the "Religious Right", arguing from a practicing Christian perspective that a secular, liberal, pluralistic society is not only compatible with Christian teachings, but is indeed a fundamental aspect of Christian philosophy.

Taking its name from an expression in US politics referring to a politician "who believes in something more than themselves…and not just the economy," The Jesus Candidate has two main lines of thought in support of its primary argument.

The first is to address contemporary issues regarding the interaction between religion (primarily Christianity) and politics. This includes an examination of the 'Religious Right', a look at US and UK politicians who make publically expressing religious views part of their brand, and case studies of legal issues involving religion. The case studies feature such prominent issues as the same-sex couple who were refused a double-bed room at the Christian-run Chymorvah Hotel in 2008, and Liberal Democrat council member Clive Bone who fought to have prayers removed from the official council meeting agendas in 2007 (the National Secular Society became involved in a number of these cases). Lusk uses these cases to argue that when it comes to matters of law and state, Christianity should not be afforded privilege above basic rights concerning equality. He argues:

"The unsuccessful political claim…is that 'equality law is marginalising Christians so Christianity should be privileged in law, to give people the right to require others – including employers and customers – to adjust to their Christian values. This can only work if a version of Christianity is defined and privileged in law. This unavoidably amounts to a demand to restore a Christian state."

The second line of argument in The Jesus Candidate is that to embrace secularism is the 'Christian' thing to do. Lusk refers to biblical teachings that he interprets as endorsements for secularism; for example, on the question of Christian authority, he states:

"…didn't Paul and Peter tell Christians, along with everyone else, to 'be subject to the governing authorities" including "the king, as the one in authority, or to governors'?"

Lusk also uses the history of the Christian church as evidence for the argument that Christianity has secularism, liberalism and pluralism within its roots. He sees early Christians as persecuted minorities led by Paul, who envisioned a society where "all the world's ways of dividing human beings by social hierarchy, gender and race count for nothing." Throughout the development of Christianity, Lusk argues, there have a number of movements, including the Anabaptists and the Mennonites, which reinforce the idea of a separate church and state. Therefore contemporary demands from the 'Religious Right' to establish a Christian state are in keeping with neither his view of Christian teachings nor Christian heritage.

By the author's own admission, The Jesus Candidate is written for a Christian audience. As a result, while non-Christian secularists may welcome Lusk's calls for a liberal, secular state, they are perhaps less likely to find resonance in Lusk's arguments that secularism is itself a Christian value. Indeed, some may reject Lusk's assertion that Christianity has contributed significantly to secular thought. Additionally, the general reader may find that the somewhat scattered structure of the book (the chapters hop back and forth between past history and contemporary issues) means that the real core of Lusk's argument gets somewhat buried. However, non-Christians may still find the collection of case studies in legal cases involving religion to be an interesting and valuable reference, and they may also find the Christian perspective to be a refreshing viewpoint.

Christians who already have secular and liberal sympathies will no doubt find The Jesus Candidate a very affirming read that reinforces their beliefs. But I am not convinced that Christians with a more right wing, orthodox outlook, or even those who are not particularly devout Christians but who perceive politics to be a battle of religious ideologies that Christianity must win, will be persuaded by this book. While it is particularly important in the current political climate for secularists of all walks of life to make the case for secularism from their own perspective, the arguments need to be articulated with a little more clarity, a little more brevity, and perhaps a little more vigour, than they are in The Jesus Candidate.

The book raises questions that people of all faiths and none must grapple with and there are many analogies to be drawn here. Just as post-colonialism and multiculturalism as a lived experience, must challenge us to develop new versions of British identity based around common values while not privileging one way of being British. Feminism, the decline of heteronormativity and problems of toxic masculinity, must force us to develop new models of masculinity which embrace equality and reject privilege. Similarly secularism and secularization (which I would call the disentanglement of people's day to day concerns, with the concerns of the dominant religious view - rather than the simple separation of people from religion) pose challenges to people of faiths.

If we are to have a truly pluralistic secularism that protects everyone's rights, then the movement needs people of all faiths and none. The decline of religious privilege can create spaces for people to explore their own personal forms of religion and belief. This pluralism and diversity undermines the claim of any one religious voice to be privileged, while strengthening the case for a secularist framework to protect everyone's rights.

The secularist movement needs religious people, but it is at its heart about challenging religious privilege and so, not only should we expect it to challenge people of faith (and atheists if/where atheism were to be privileged), but we might have cause to be concerned if it didn't cause some discomfort. Feminism also needs male voices to succeed, anti-racism also needs white voices, campaigns for LGBT equality needs straight allies, anti-poverty campaigns also needs the rich etc. etc. But these movements will fail if they prioritise including members of the privileged group over challenging that privilege.