Al-Hijrah School ruling: The fight to end segregation has only just begun 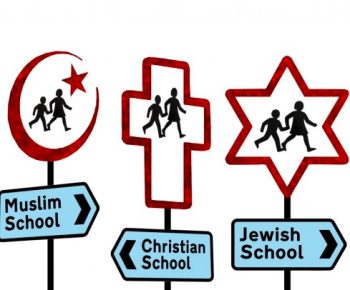 The ruling that an Islamic faith school's policy of gender segregation is unlawful should force us to have have a broader conversation about the religious segregation and inequality our children face in UK schools, argues Megan Manson

Make no mistake: the ruling that Al-Hijrah School's segregation of boys and girls amounted to unlawful sex discrimination is a landmark one.

Those 20 schools now face re-inspections by Ofsted, and they will be penalised if they continue to separate their boys and girls.

The NSS are among many equalities campaigners who are celebrating the ruling. Pragna Patel of Southall Black Sisters called it "a vital step forward in our effort to persuade the courts and state bodies to take account of the reality of the misogyny and gender stereotyping that is promoted in our schools and universities in the name of religious and cultural freedom." Sara Khan of Inspire commented, "I hope this serves as a reminder that equality and the rights of women and girls especially from minority communities must not be sacrificed in the name of culture or religion."

And it seems there are pupils at Al-Hijrah School itself who will be celebrating too. Ofsted noted during its damning inspection that a number of pupils, both girls and boys alike, had criticised the segregation. One girl said that she thought the policy was 'dumb' because she would mix with boys when she went on to college, but the school had not given her the opportunity to learn how to form friendships with boys.

It's interesting that the ruling comes not long after the London School of Economics' admittance that gender segregation at a dinner held by its Student Union's Islamic Society last year was unlawful. At this event, separate tickets were issued to 'brothers' and 'sisters' and participants were divided by a seven foot screen.

These cases would suggest that UK society is slowly waking up to the damage being caused by religiously-sanctioned segregation, and that we are gradually rejecting the idea that it is acceptable to segregate people when 'required' by faith.

However, throughout this year we have seen other cases demonstrating that the fight to end religiously-motivated segregation is far from over.

In September, we highlighted the Sunday Times survey of primary schools in England, which found that one in five primary schools listed the hijab within their uniform policy.

Further research carried out by the NSS revealed that over 40% of Islamic schools in England require pupils to wear the headscarf or another form of hijab. This includes eight state-funded schools (of which Al-Hijrah School is one) and 27 primary schools – three of which are state-funded.

The findings prompted campaigners, including the NSS, to request a meeting with chief inspector Amanda Spielman to voice our concerns.

The ruling against Al-Hijrah School's segregation policies should have significant implications for school policies regarding the hijab. For one thing, schools enforcing hijab on female pupils is itself a form of discrimination. It sets a different standard of modesty for girls and boys, giving girls less choice over what they can wear.

More fundamentally, forcing pupils to wear hijab or any other form of religious clothing effectively takes away the pupils' right of freedom of belief, or non-belief. In their judgment of the Al-Hijrah case, the Court of Appeal cited a speech by Baroness Hale on an earlier case concerning religious clothing at schools. Regarding the hijab, in R (Begum) v Headteacher and Governors of Denbigh High School, Baroness Hale had said:

"…it must be the woman's choice, not something imposed upon her by others…In all traditions, religious claims and rituals may be used to legitimise power structures rather than to promote ethical principles, and may foster bigotry, sectarianism and fundamentalism. Notoriously, religion often accepts and gives its blessing to gender inequalities."

In the wake of the ruling, we need more scrutiny on the policies of faith schools that potentially take away children's freedom, while simultaneously re-enforcing power structures and inequality. When it comes to religious dress, this should not be limited to Muslim schools either – schools that force boys to wear the kippah at Jewish schools or dastar at Sikh schools, for example, also require our attention.

Finally, the ruling should be a wake-up call to act on the ever-growing problem of segregation based on religious lines that exists throughout our entire education system. Despite the obvious social division caused by educating children from different faith communities separately, the UK continues to open new faith schools. It even fights to keep existing faith schools from closure, even if this means closing a non-religious school in the process, or creating a bizarre situation in which pupils within the same school are taught separately according to faith. And yet the government is still considering scrapping the rule that means oversubscribed religious free schools can only select 50% of their pupils on the basis of faith. This would lead to yet more religiously segerated schooling and the gaps between our communities would grow ever wider.

So let's hope the Al-Hijrah School's ruling forces us to have a conversation about the segregation and inequality our children face, and to think seriously about what it truly means to be a diverse yet cohesive society.