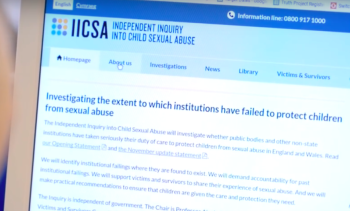 An upcoming hearing of the Independent Inquiry into Child Sexual Abuse will be an opportunity to examine the reality behind the Catholic Church's claims that it has transformed its approach to child protection, says Richard Scorer.

At the end of November, the Independent Inquiry into Child Sexual Abuse (IICSA) will begin hearings into the English Benedictine Congregation (EBC), a Catholic monastic order. The focus of the hearings will be abuse scandals at two elite private schools associated with the order, Ampleforth and Downside. A future hearing will examine events involving St Benedict's school and the associated abbey in Ealing, West London.

What might we expect the inquiry to look at? A repeated refrain from the Catholic Church is that whilst there were dreadful safeguarding failures in the past, the Church has now transformed its approach to child protection. As a lawyer representing survivors of abuse in Catholic institutions, I recognise that some progress has been made in safeguarding. But I question whether that progress has been anything like fast enough, and whether new procedures have been underpinned by a conversion of "hearts and minds". In 2001, the late Cormac Murphy-O'Connor, Catholic Archbishop of Westminster promised that with the 'Nolan' reforms the Catholic Church would become a "beacon for child protection". Fundamental to this was the Church eschewing its past practice of dealing with cases 'in-house', and ensuring that all allegations of clerical sex abuse would henceforth be reported to police or social services ­– something which it surprises many people to discover is still not a formal legal requirement.

The new policy was supposed to mean not only reporting of future allegations, but also that the Church would "cleanse the stables" by identifying past concerns and ensuring that those too would now be reported, especially where the cleric or teacher concerned continued to have contact with children. That at least was the promise: the hearings will provide an opportunity to examine the reality. The issue of reporting comes into sharp focus with Benedictine institutions: many of the scandals in the Benedictine Congregation are recent, and cannot simply be dismissed as ancient history from decades ago; moreover, the Benedictine culture seems to have been particularly resistant to external reporting.

Downside is a case in point. The Nolan reforms were announced in 2001. Yet in 2012, an abuse victim and former pupil from Downside alleged that the school was "infiltrated by paedophiles at all levels". Anyone inclined to dismiss this as hyperbole should consider the facts. The victim's comments followed the conviction that year of Father Nicholas White, a Downside monk who also taught at the school. White was jailed in 2012 for gross indecency and indecent assault on a pupil in the late 1980s. But the school had known about White's behaviour since 1987. Documents made available at White's trial indicated that the school had sought legal advice in the late 1980s as to whether they were legally obliged to report the allegations to the authorities; the absence of a mandatory reporting law meant that they were not obliged to do so, although one might think that a responsible institution concerned for the welfare of children would have elected to do so anyway. So no report was made. White had been allowed to continue teaching after he was first caught abusing a child in 1987, merely being restricted to teaching the very youngest boys; he then went on to assault another pupil in the school.

After the second incident, White was sent away to Fort Augustus, a Benedictine outpost in Scotland (This practice of moving a known or suspected sex abuser from one institution to another, failing to alert the recipient institution and failing to alert the authorities - a practice known colloquially as "move and forget" - appears to have been common in the Benedictine Congregation, with some suspected abusers being sent as far away as Australia; victims' lawyers have urged the inquiry to examine it closely in the upcoming hearings).

In 1998 White eventually returned to Downside. Despite the promises of openness which followed the Nolan reforms in 2001, police were not informed of the earlier allegations, and White was not arrested, until 2010. The police only stumbled across the case by accident during a separate investigation into another clerical sex offender at the school (an investigation initiated by another client of mine, who will be giving evidence in the upcoming hearings). The eventual exposure of White's activities led to a flurry of inspections by Ofsted and the Independent Schools Inspectorate (ISI). The inspection reports make unhappy reading: the ISI complained of "serious mismanagement" of safeguarding and observed that in this respect, the school was "effectively in special measures".

The school's longstanding practice of inviting pupils from the school into the monastery for "overnight retreats" was only stopped in 2011 at the ISI's insistence, since the monastery contained monks who were on "restricted ministry" because of the risk they posed to children. All of this begs the question, of course, of why those shortcomings hadn't been picked up by inspectors previously: things had clearly been amiss for years, but it was only White's arrest that brought these issues to light. Again this will be an important issue for the inquiry. The organisations responsible for inspection will almost certainly argue that they are not a police force. In the absence, therefore, of a mandatory legal duty on institutions to proactively report knowledge or suspicion of abuse, there is a high risk that much of it will go undetected by external agencies. I agree, but the concern must also be that the elite status of these schools and their apparently spiritual ethos blinded inspectors to the underlying reality.

Similar concerns have arisen at Ampleforth, the other institution to be examined in the upcoming hearings. Scandals there have a long vintage, dating back to the days when Cardinal Basil Hume was headmaster. In those days the practice of "move and forget" seems to have involved removing clerical sex offenders from the school and dumping them in Ampleforth's "mission parishes", working class districts where monks would be sent from Ampleforth for outreach work amongst the poor.

One of my clients who grew up in Workington on the Cumbrian coast was abused there as a young boy by Father Gregory Carroll, who had been rusticated to a "mission parish" in Cumbria following abuse of pupils at Ampleforth. The local community in Cumbria were told nothing about Carroll's history. That was in the late 1980s.

But the issues at Ampleforth are far from historic: some of the recent scandals have been painstakingly detailed by Andrew Norfolk of The Times. A teacher was convicted and jailed earlier this year for sexual exploitation of a pupil in the very recent past; this went on for several years. Safeguarding procedures at Ampleforth had ostensibly been updated but the more recent cases suggest some attitudes and culture remain ossified. Jonathan West, a leading campaigner for mandatory reporting who also helped to expose the scandals at St Benedict's, makes the remarkable point that despite the English Catholic Church's apparent conversion to the idea of external reporting after 2001, not a single case of abuse in the English Catholic Church has subsequently come to light because a Catholic institution decided to formally report it; cases continue to come to light only because of the bravery of victims or whistleblowers.

Against that backdrop, the leadership of the English Benedictine Congregation will also rightly be under scrutiny. For 8 of the 12 years between 1998, when Father Nicholas White returned to Downside, and 2010, when he was arrested, White's Abbot at Downside was Richard Yeo. Yeo was certainly aware of White's history; he was also in charge at Downside when White was permitted to return. But Yeo had another important role as well: between 2001 and 2017 he was President of the entire English Benedictine Congregation. In the light of the sorry history described above, it is perhaps no surprise that earlier this year Yeo stood down as Abbot President of the Congregation, to be replaced by the apparently more media savvy Christopher Jamieson, a former Abbot of Worth Abbey.

However, Yeo has been called to give evidence in the upcoming hearings. On his watch, several of the EBC institutions have failed to implement the separation in governance between the school and the monastery recommended by the Carlile Report into the scandals at St Benedict's Ealing; the governance reform was implemented there, but not at Ampleforth and Downside. This is one of many decisions he will need to defend. (Remarkably, Yeo, in addition to the other positions he held, was also a member of the 2007 Cumberlege commission, whose task was to review the way the Catholic Church in England and Wales responded to Nolan. He is therefore considered by the Catholic church to be one of their leading authorities on child protection).

Of course, there have been many abuse scandals in secular institutions: nobody would claim that religious institutions are uniquely affected. However, the Benedictine scandals highlight some of the ways in which religious culture can increase the risk of abuse, and the risk of it being swept under the carpet. In Benedictine institutions, the geographical reach of the Congregation led to the dumping of paedophile monks in missions or abroad. Monasticism meant monks having freedom and no oversight. The adamantine certainty of belief and sense of spiritual rectitude which sometimes characterise religious organisations make it harder to ensure the institutional challenge, self-awareness and self-criticism which are so necessary to uncovering and tackling abuse. All of this makes a powerful case for mandatory reporting, a change supported by the NSS and hopefully in due course by IICSA itself.