The legacy of decades of abuse in a Catholic children's home 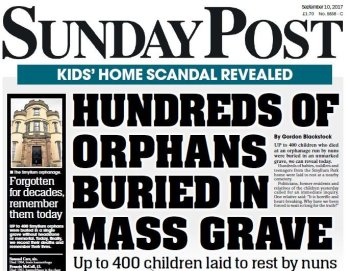 Hundreds of children died at Smyllum Park, a home in Lanarkshire run by the Catholic Church between 1864 and 1981. As an order of nuns considers selling the land, calls for a memorial are mounting. Mark Boules reflects on what is left after decades of abuse at the home.

For at least one summer in the late 1920s, my great uncle and aunt stayed at the Smyllum orphanage. They were by no means orphans, but they were certainly poor. So, to save money, their parents sent them to the orphanage where they knew their children would be fed, washed and clothed for a whole summer. The place was run by the Daughters of Charity, after all. What else could they show but charity, when a pair of impoverished infants appeared at their door?

What else indeed. In light of the recent discoveries surrounding the Smyllum orphanage, I can't help but wonder if my great grandparents had any awareness of any unmarked graves, or stories of sadistic nuns delivering the fruits of their psychoses onto the children under their care. The thought of a poverty that could drive a parent to risk their children in such an atmosphere makes my skin crawl. I live in hope of their ignorance; complicity would be too much to consider.

Indeed, it may be that the institution held a certain level of infamy in Lanarkshire at one time or another; a friend tells me that her parents would threaten to "send [her] to Smyllum" if she didn't behave. Obviously a threat with no real bite, one can't help but wonder nonetheless if the threat was of abandonment, or if it was an acknowledgement of something more sinister.

The orphanage itself is all but gone. Formerly a large compound of many buildings spread across a large farm-like area, for more than thirty years only the shell of the main building has remained, with its distinctive castle-like design with rounded battlements, now containing only residences and private businesses. Very little of its past is borne on its exterior, and any clues contained within have been scooped out, like the rot from an infected tooth.

Not so far away however, across a busy road from the popular Lanark Loch, lies St Mary's Cemetery, a private Catholic burial site, which serves the local parish of the same name, and once served the orphanage too. A self-termed survivor of Smyllum, Frank Docherty, discovered evidence of a number of unmarked graves here, seemingly belonging to children resident at the orphanage who had died. A government census from 1888 categorises the children as "scholars", and numbers some 400 of them. By grim coincidence, around 400 graves have been discovered in the cemetery.

Some graves relating to the orphanage are marked here. Not far from the entrance, a regular 3 by 8 grid of black marble headstones mark the resting place of a number of nuns belonging to the Daughters of Charity. They are buried five or six to a plot; somewhere between one hundred and two hundred women are buried in this grid alone. Yet more grey stones, less regularly placed, show more clergy buried here. The nuns are all buried in shared graves, while the priests are afforded the dubious comfort of their own plots.

The heinous faults of the Smyllum orphanage are layered, being the results of the systemic errors that come about from an ideologically motivated organisation allowed to operate without oversight. The state of the cemetery plots show the unspoken hierarchy present there, with male priests shown preference over female nuns, who in turn are afforded a respect that is withheld from the children under their care. The collusion between the orphanage and the parish of St. Mary's - which owns the cemetery - and between the parish and the Diocese of Motherwell speaks volumes, especially in the light of the Daughters of Charity's claim, that they have lost all records of any kind relating to Smyllum.

And yet the records etched in the memories of its survivors continue to surface, speaking out for the generations of children, some who will now forever remain anonymous due to a dereliction of a duty of care, who suffered needlessly. If these are the only records that remain, then so be it, but they do not record a history the Catholic Church will soon be allowed to forget.

Mark Boules is a secularist and a humanist from Lanarkshire. The views expressed in our blogs are those of the author and may not necessarily represent the views of the NSS.