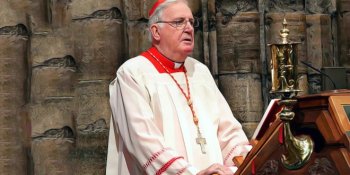 Cormac Murphy O'Connor, the former Archbishop of Westminster, died on 1 September. NSS executive director Keith Porteous Wood seeks to set the historical record straight with this alternative obituary. This piece was originally published on Conatus News. It is reprinted here with kind permission.

The death of Cardinal Cormac Murphy O'Connor has understandably resulted in obituaries lauding his achievements as a Prince of the Catholic Church. But we are pleased that few ignore entirely the Cardinal's involvement in one of the most scandalous child abuse cover-ups this country has seen.

I don't doubt for a moment that Cardinal Murphy O'Connor did some good in his life, but there was another side to his story that should not be forgotten – a side that resulted in pain and suffering for many children. And the ruthless campaign by the Church to repress the details of the Cardinal's many errors and misjudgements, and worse.

Despite the image of a genial old buffer that the Cardinal liked to project, it did not stop him, in 2006, from sacking his talented press secretary, a lay position, simply because he was "openly gay". And O'Connor was "firmly against the repeal of Clause 28, which banned the promotion of homosexuality in schools", a repressive and vindictive measure now regarded with embarrassment. This, despite the prevalence of gay men in the priesthood.

Those with long memories will also remember that, following complaints from parents, O'Connor, when Bishop of Arundel and Brighton, moved a known serial practising paedophile cleric, Michael Hill, from unsuspecting parish to unsuspecting parish.

If O'Connor's objective had been to reward Hill by affording him the greatest possible opportunities to prey on an almost unlimited supply of vulnerable unaccompanied juveniles, some of them thousands of miles from their parents, he could have done no better than appoint Hill as Catholic chaplain at Gatwick Airport. Yet this is exactly what O'Connor did, despite his knowledge of Hill's repeat offending and psychiatric reports that Hill was likely to re-offend.

To his dying day, the best Murphy O'Connor could do in his mea culpa on Hill was to say his response was "inadequate but not irresponsible". Not much consolation to the victims and their families. Nor will have been the self-righteous indignation of his pitiful response to criticism:

"Inevitably mistakes have been made in the past; but not for want of trying to take the right and best course of action."

Richard Scorer, abuse lawyer and NSS director, examined the Hill saga exhaustively in his book Betrayed: The English Catholic Church and the Sex Abuse Crisis and demonstrated beyond doubt that O'Connor's claims about Michael Hill were completely baseless.

And, so predictably, O'Connor's affable mask slipped again and he got pretty vicious when the media started asking what were, to his mind, too many questions and getting too close to the uncomfortable truth.

It is an open secret that the BBC was muzzled from pursuing its investigative work on O'Connor by top-level representations made by O'Connor.

Few if any others than O'Connor could have managed to intimidate the BBC into silence, yet having done so, O'Connor still had the gall to claim that there was an anti-Catholic bias in the media. He wrote:

"Many others feel deeply concerned by the apparently relentless attack by parts of the media on their faith and on the church in which they continue to believe."

That old trick so well practised by the Catholic hierarchy: portraying itself as the victim.

That would all be shocking enough, yet there is credible speculation that the Hill saga could have been just the visible tip of the iceberg. A 2012/3 report by the group Stop Church Sexual Abuse has speculated that:

"[Anglican] clergy … seem to have worked together with priests from [O'Connor's] Catholic Diocese of Arundel and Brighton … to abuse children.

Reports include that of a Catholic priest who had multiple reports for alleged child sex offences and who was moved by the Catholic Bishop [O'Connor] over to the CoE diocese of Chichester and became an Anglican Minister.

"The relationship between the [Catholic] Diocese of Arundel and Brighton [O'Connor's] and [the Anglican one of] Chichester [in which Peter Ball, mentioned below, ministered] has been historically close. … in the 1980s … Bishops Cormac Murphy O'Connor and Peter Ball [not imprisoned until 2015 on multiple counts of sexual abuse committed over twenty years earlier] were close friends and it is now [claimed] that both sat on multiple reports of child sexual abuse by clergy and did nothing to protect children from further abuse.

"In total upwards of 17 Anglican and 19 Catholic clergy have been reported to have abused children up to the late 1990s within these Dioceses. Most lived and/or worked within one small geographic area which adds to the concern that there [may have been] a network of sex offenders shoaling for victims within church communities, schools, cathedrals, youth groups and scouting groups."

Even the Daily Telegraph reported police investigations into "claims that O'Connor hampered Hill's prosecution" and if the claims above are correct about O'Connor's close friendship and nefarious collaboration with the devious and mendacious Peter Ball, who escaped justice for decades, this does not seem in the least far-fetched.

At least, however, O'Connor is still indelibly connected in the public's mind with the disgraceful Michael Hill saga, having been widely reported including in The Times, with severe criticisms including "Victims' groups demanded his resignation in 2002".

The Church could not but have known very much more. But the process of rewriting history is no doubt in full progress.

Does it not however speak volumes about the Pope and Catholic Church that, given all the above, they chose, out of all the possible candidates, "His Eminence Cardinal" Cormac Murphy O'Connor to be a cardinal, to be the most senior Catholic in England and Wales, to be Emeritus Archbishop of Westminster, and to be the Pope's Apostolic Visitor to investigate clerical child abuse in the Archdiocese of Armagh?

But maybe we should not be surprised. The Pope tellingly did not strip O'Connor's fellow Cardinal in Scotland, Keith O'Brien, of his cardinal's biretta for abusing his rank with decades of predatory sexual activity, when it all came to light in 2013. There, homosexuality seemed more like a job requirement than a sackable offence.

It seems from the Gibb Report into disgraced former Bishop Ball that Sussex police appear to have done a workman-like job on abuse in the Anglican diocese. I would have suggested that the Sussex Police now turn their attention to the Catholic diocese, but unfortunately the CPS told them in 2003 to abandon the investigation whilst refusing to explain why. Hopefully this was not because of O'Connor's clerical rank, just like the CofE's Report suggested Peter Ball's cleric rank was the reason he escaped justice in 1993.