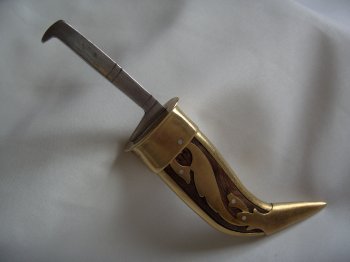 The latest submission to religious demands came this week when a popular theme park lifted its ban on Sikh visitors wearing ceremonial swords.

Quite understandably, Drayton Manor theme park has a general policy of not allowing 'weapons' or 'other articles which may cause injury' into the park. Clearly the Kirpan (or ceremonial sword) worn by a small proportion of Sikhs falls foul of this policy.

However, faced with accusations of 'religious discrimination', after refusing to allow a Sikh man carrying a sword into a children's party at the theme park in June, Drayton Manor has now backed down.

Following "in-depth consultation" with "Sikh elders", the theme park has backtracked and will now allow Sikhs to bring in ceremonial daggers provided they are "no more than six inches long". This is despite a report from a renowned health and safety specialist confirming that "the wearing of a sheathed dagger posed a viable compromise to safety whilst on a ride".

So now we have a situation whereby kids' wheelie shoes are banned, but six inch knives are fine ­– provided they're strapped to a Sikh. Welcome to the crazy world of religious privilege.

A couple of things concern me about this development. Firstly, it's concerning that some of the commentary around this decision appears to give credence to claims that for some Sikhs, wearing the Kirpan is "not a choice". Of course it is.

Being black is not a choice. Being gay is not a choice. Following a particular religion is a choice – or at least it absolutely should be. Amritdhari Sikhs make up fewer than 10% of all Sikhs. They choose to follow this religion and they choose their strict level of observance.

The bogus argument that we must make special exemptions for religious practices because those practising that religion have "no choice" in the matter needs to be called out for the non sequitur that it is.

All claims of conscience should be subject to equal scrutiny. There are principled arguments for why the state ought to tolerate a plethora of private choices and conscientious commitments, but there is no good argument to single out religion for anything like the special treatment it receives in Western societies and legal systems.

The cutting of young boys' genitals and live animals' throats is tolerated because religious ideas are deemed more worthy of respect than children's bodily integrity or the welfare of farm animals. We grant wide exemptions to equality laws to enable discriminatory 'faith schools' to operate. We consider 'the advancement of religion' to be a charitable purpose, giving tax breaks to religious groups despite scant evidence that many religious charities deliver any meaningful 'public good'.

This uncritical privileging of religious ideas also renders us incapable of calling out bigotry and intolerance when it masquerades as faith. Those quick to call out racism, hatred, homophobia, sexism and even abuse too often give religion a free pass, turning a blind eye to injustices when occurring in a religious context.

We claim to support free speech, yet happily practise self-censorship of anything that might offend 'the religion of peace'.

Rather than applying any principled toleration of religion, perhaps what we're actually doing is privileging ideas and claims of conscience that are most likely to make trouble if not acceded to. But tolerating religious fanaticism for a quiet life many not be such a wise choice. Opening the door to religious exceptionalism is unlikely to lead to anything like a quiet life as Britain becomes increasingly diverse.

I'm all for reasonable accommodations and common sense, but religious freedom does not equate to religious entitlement. Let's not be fooled into thinking we're under any moral obligation to tolerate religious acts of conscience that burden others or risk harm.

As Brian Leiter points out in his book, Why Tolerate Religion?, "Toleration may be a virtue, both in individuals and in states, but its selective application to the conscience of only religious believers is not morally defensible".

Secularists have long challenged religious privilege. Such privilege comes in many forms. Not only is there a need to challenge the more obvious privileges religion enjoys ­– such as public funding for religious schools and automatic seats for bishops in our legislature. There's also a need to challenge 'soft privilege' that manifests itself in the mindset that religious ideas are somehow deserving of automatic respect simply because they are religious. They are not.

Tags: Multiculturalism, One law for all, Secularism