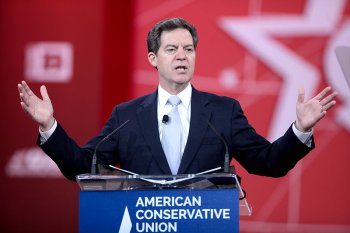 The record of President Trump's new nominee exposes the hypocrisy of the US religious right. Chris Sloggett argues that its opponents must challenge the ingrained assumption that faith is a good thing.

"Religious freedom is the first freedom. The choice of what you do with your own soul. I am honoured to serve such an important cause."

This was how Sam Brownback responded to his nomination as the US's new ambassador at large for international religious freedom on Twitter last week. His advocates said he would be ideally suited to the role. Some pointed to his rare perfect score on the International Religious Freedom Congressional Scorecard. And his words were certainly reasonable.

But the following day he returned to Twitter – and gave away the catch.

"Kansas is my home," he wrote the day after his appointment. "Here, we are free to live in faith. Religion is where we live our inner life. All people ought to live that in freedom."

We are free to live "in faith". Religion is where we live our inner life. This was a 140-character summary of the hypocrisy of America's religious right on religious freedom. This group is very happy to remind us that people have the freedom to believe what they want. But they are predictably reluctant to accept that with freedom of belief comes freedom from belief.

Brownback's record in his current role as governor of Kansas reflects this. He granted a religious objection order which allowed taxpayer-funded services to discriminate in their provision. He rescinded an executive order which protected state employees from discrimination. These measures meant state employees could refuse to serve or hire gay people. And in March 2016, he signed a bill which required public colleges and universities to recognise and fund religious student associations.

He has also proved intensely hostile to gay marriage. Even after the US supreme court made same-sex marriage legal in all 50 US states in 2015, he opposed it so strongly that a federal judge put his state on probation and monitored its implementation of the ruling. So Brownback is no champion of "the choice of what you do with your own soul".

Freedom of religion defends people from encroachment into their personal affairs. It grants you freedom of speech: you can think and say what you like, short of inciting violence. It grants you the right to associate with others who share your religious outlook freely and privately.

Brownback does not appear to appreciate that non-believers' interests are as important as those of believers. So if he is confirmed in his new role, we can expect him to fund dubious religious programmes, promote fringe groups who undermine secular ideals and turn a blind eye to discriminatory laws.

In theory, secularists in the UK should aspire to make their country more like America. But in reality secularism is not just about the formal separation of church and state. It is about resisting theocracy in all its forms; my personal view is that it should be part of a broader effort against the power of certainty, arrogance and fanaticism.

In the US, the religious lobby has not gained influence through state-funded faith schools or an established church. It has done so by claiming a special social and moral status. This is why Brownback's appointment was partly welcomed on the grounds that he "brings his personal faith to the table". It is why one of the tasks on his desk if he takes office will be to hold "programmes of outreach to American religious communities".

The special status of religious ideas mean non-belief is still a taboo in America. No open atheist has ever risen to the presidency. There are 535 lawmakers in Congress. More than nine out of ten of them are Christians. None of them have openly declared themselves as atheists. Just one describes herself as religiously "unaffiliated".

Even those who have little record of personal faith before entering politics have embraced it. When Mark Zuckerberg renounced his atheism, it was taken as a sign that he was lining up a presidential bid. Trump's personal religious convictions are dubious, but he has won votes by playing them up; just two weeks ago he tweeted: "In America we don't worship government, we worship God!"

American candidates do this because it plays well. Last year Pew found that 51% of Americans would be less likely to vote for a candidate who did not believe in God. Being an atheist was a bigger electoral liability than being Mormon, Muslim or gay; having a history of drug use, financial problems or extramarital affairs; or even having extensive experience in Washington, DC. But there was hardly a stir when Trump chose Mike Pence, who has advocated the teaching of creationism in public schools, as his vice-presidential nominee last year.

When such a double standard is ingrained, believers' freedoms will trump those of non-believers. Only yesterday a study showed that people around the world assume atheists are more likely to be serial killers than believers are. Reliable research does not appear to back up their preconceptions.

And this deferential attitude to faith is not confined to staunch believers. Perhaps this is why so many opponents of the religious right take great pleasure in comparing American evangelicals to American Muslims, as if one "beating" the other in a poll (when all other groups surveyed got a better score than either of them) is cause for celebration.

Perhaps also it helps to explain the embrace parts of the US left give to the likes of Linda Sarsour, who has defended sharia 'law' and the hijab and berated ex-Muslim freethinkers. Whether on the right or the left, believers enjoy an unearned, elevated position. But taking on the religious right does not mean shrugging our shoulders at other forms of theocracy, or indulging the bigotry of low expectations.

It requires defending people's right to practise their faith, while also defending others who choose to reject them and believe what they like. It requires declaring confidently that unchecked religious fervour has done great harm throughout history – and continues to do so, as world events show us on a depressingly regular basis. It requires a root-and-branch challenge to the narrative that religious belief is an inherent good.