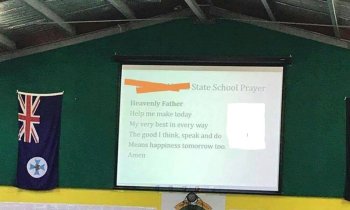 Blinkers go on when the topic is religion. So one parent in a Queensland school thought she would use food to explain the impact of the school's version of 'inclusiveness', which involves telling them her child can go somewhere else while the prayer is being said. The picture is of the prayer recited at the regular assembly.

Mary is a new student at the school, having just started Prep. She has now been attending for about six months. She is enjoying the new experience and is a kind and capable student.

One week, one of her parents came to the school to meet her for the weekly ritual Friday lunch, which parents are encouraged to attend. Mary's parents had been unable to attend previously.

Each week the school runs a programme which includes a free snack for all the children. Each week it is the same snack. Each week the entire student body is invited by the student council, under the supervision of the teachers, to take part in the small meal. The meal is a hotdog. Now, Mary's family are vegetarians, and this was clearly indicated on her enrolment by her parents.

Each week Mary had been invited to eat meat with her peers, and being 5 and inexperienced, she had not realised that she was in fact eating meat. Mary's parents had thought that as they were the custodians of their child, and provided food for her each day, she was in no way at risk of ingesting non-vegetarian food, especially since they had notified the school of their views on food.

Mary loved the vegetarian hotdogs served in her home and was completely unaware that she was being fed something that was contrary to her parents' wishes. Needless to say when Mary's parents found out they felt upset, angry, and betrayed by the school. This was not something they had been consulted about, and when they questioned the principal and the education department, the response was, although policy says that all schools must be inclusive of all students, where a school has a tradition it is acceptable to maintain it at the expense of inclusivity. They said, 'Mary doesn't have to eat the hotdog; we can have her sit outside with a teacher while the other children eat their hotdogs.'

When asked why a snack that would be suitable for all children, so none had to miss out, could not be substituted, Mary's parents were told that it has been the same snack every week for 30 years, and this is the first complaint they'd had, and that if the majority voted to keep the hotdogs there would be no changes to the ritual.

They were told that Mary could opt out, and it wasn't mandatory, that Mary could sit to the side and not join in. Don't forget: Mary is just five and it's her very first year at school.

The odd things is, while looking into this matter, Mary's parents found out that around 70% of parents had also said their child was vegetarian, and the school had been feeding their children something that was not in line with those families' views.

Neither the principal nor the education department were prepared to set a standard of inclusiveness; instead, they agreed the way to be inclusive was to exclude Mary.

It would be so very simple to remove the first and last lines of the prayer the children recite and call it the School Creed, which would be inclusive of all parents, teachers and children. From 2016 enrolment data, only 27% of children at this school have been identified as Christian. Even if the majority were Christian, we would expect state schools to be a model for inclusiveness rather than mob rules.

This article and picture were originally published by Queensland Parents for Secular State Schools and are reproduced here with their permission. QPSSS is a movement of parents who believe Queensland state schools should be inclusive of all pupils regardless of their religious or belief background. They challenge segregated and biased religious instruction and advocate for professional school counsellors to replace state funded religious chaplains.