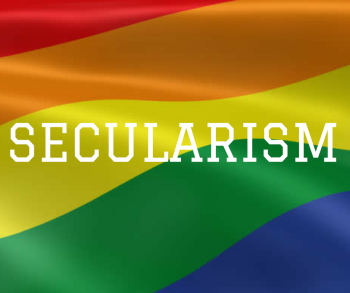 On Pride weekend, NSS executive director Keith Porteous Wood highlights the interconnectedness between the fight for secularism and equality for LGBTQ people.

Homosexuality, or at least homosexual activity, especially by men, has been a long-standing subject of extreme opprobrium by religious "authorities". The first state-sanctioned death penalty for male same-sex intercourse was reportedly around 500 BCE - with the adoption by Persian Jews of the "Holiness Code" of Leviticus.

According to Law, Religion and Homosexuality "the regulation of sodomy by the medieval ecclesiastical courts [in England] can be seen as enforcing a moral intolerance rooted in Christianity". (Until the mid 19th century such courts had jurisdiction over everyone, not just clergy as now). In 1553, as Henry VIII broke off with Rome, 'buggery' became a criminal offence punishable by hanging. This was largely in an endeavor to wrest power from these courts.

The fervor of Christian opprobrium can be gauged from the phrase Peccatum illud horribile, inter Christianos non nominandum (that horrible crime not to be named among Christians).

The Catholic Church's total opposition to homosexuality continues despite the headline grabbing but vacuous "who am I to judge?" papal comments. It still officially describes both gay people and homosexual acts as "intrinsically disordered". Having said that, there seems in some countries at least (and even in the Vatican itself) to be a widespread disregard for Vatican pronouncements. So maybe that hostility is rather less than might be imagined, perhaps also because – ironically – so many priests are gay. According to one report, it is a third in the US.

There is little doubt that such attitudes promulgated by the churches and repeated in their schools have been a major factor in fanning homophobia in the populace. Broadly speaking, the greater the religious fervency, the more homophobia there is; in the UK that certainly applies to Northern Ireland.

Worldwide, there are 76 countries where homosexual acts remain illegal, 14 (mainly Muslim) where they are a capital offence; and in around five of these executions are carried out.

In the UK, partial decriminalisation of homosexuality for England and Wales was enacted in 1967, but it took around a further fifteen years for this to be extended to Scotland and finally to Northern Ireland.

Some may be surprised that the 1967 decriminalisation was supported by the then Archbishop of Canterbury and the other bishops who voted, but in many ways the Church of England then was quite liberal. Who could have predicted that, nearly fifty years on, the bishops would have turned out in force to vote en bloc against same sex civil marriage, especially as public opinion (even among Christians) had become hugely more liberal in the meantime? What a contrast to all Muslims in the German Parliament voting for same sex marriage.

This is further evidence if any were needed of the Church's bishops being 'the most orthodox since WWII', as the current Primate was keen to brag to his international, and very orthodox, colleagues, not realising one of them would leak it. I believe that this growing orthodoxy has been strategically planned by the evangelicals, caring nothing that it takes the Church keen on claiming to be a national church in the opposite direction from the populace and many of its congregants.

This orthodoxy may make Dr Welby fractionally less unpopular in the developing world, much of which sickeningly homophobic.

Several experts on Africa have told me that American evangelical money is poured into Nigeria to bolster anti-gay religious teaching and influence. In 2013, Nigeria even introduced a Same Sex Marriage (Prohibition) Act. Human Rights Watch said "The law has led to an increase in extortion and violence against LGBT people and imposed restrictions on non-governmental organizations providing essential services to LGBT people in Nigeria." Mind you, they are not the first Christians to do so; the first law against same-sex marriage was promulgated by the Christian emperors Constantius II and Constans, in 342 CE.

But the Church of England is playing a dangerous game and the tables are turning somewhat. After centuries of the Church persecuting gay people at every turn, disputes over LGBTQ related issues could fatally split the Anglican Communion, and certainly the Archbishop of Canterbury's increasingly nominal presidency of it. But even greater damage may await at home.

The Church hierarchy's attitude to same sex marriage is unsustainable. The United Reformed Church, and the Scottish Episcopal (Anglican) Church accept same-sex marriage as does its US equivalent. Several other UK churches are contemplating it as are numerous other Anglican churches worldwide.

As a secularist, I support the right of the Church to dictate its own doctrine without state interference. But that does not bar me from saying such policies cause needless misery, nor to express the opinion that as both congregants and public opinion become ever more liberal on gay issues, the hierarchy becomes ever more isolated, as the recent report of Church in turmoil at Synod demonstrated. Their opposition clearly isn't boosting much-need attendance especially among the all-important young. I would not be the first to suggest that the same-sex marriage battles could combine with child abuse and the dispute over women bishops to create a perfect storm causing a three dimensional schism.

While the UK population has become hugely more secular, religious forces have become more powerful. The need to take notice of growing and assertive forms of Islam, partly because of security concerns, has in its wake reinvigorated Christian leaders' ambitions. Minorities have segued from being identified by their countries of origin to being united around their religion (and sometimes segregated on religious lines), attend single-faith religious schools and are now represented by their religious leaders, not all of whom subscribe to so-called British values. And then there is the procession of religious PMs, nearly all of whom have been keen to give religion a leg up at every turn – but I must admit have generally been supportive of the advancement of gay rights.

Largely because gay people have courageously come out, the population's innate humanity has warmed to them and then discarded the gratuitous cruelty of previous generations.

Nevertheless, rather similar to the Church hierarchy's growing dilemma on same-sex marriage, the chasm between our religion-centred public institutions and the growing secularity of the population must eventually become unbridgeable.

The challenge for all of us is to mobilise that steadily secularising population, non-religious and religious alike, and persuade them of the benefits to us all of a more cohesive and equal society that only secularism can deliver.