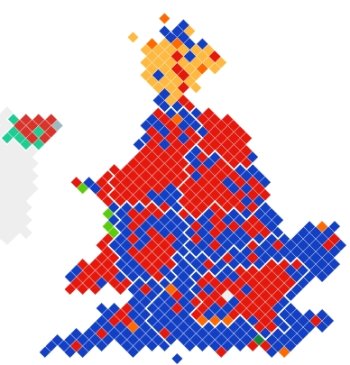 Whatever your party political views, there are principles that we can all support: the triumph of secular democracy, a commitment to human rights and tolerance, and the rolling back of theocracy, religious privilege and sectarianism. But the success of these values is not guaranteed. Around the world, including here in the UK, these ideas are under attack, and need secular democrats of all stripes to stand up for them.

Democracy isn't just about polling day. The days ahead are as an important as the campaign itself. As the new government programme becomes clear we will be there to demand equal respect for everyone's human rights so that no one is either advantaged or disadvantaged because of their religious background or beliefs.

The short election and focus on other issues meant that secularist concerns were always going to be low down the agenda. But with your help we'll continue to raise these important issues with MPs – including our honorary associates in the House of Commons, who have all been successfully re-elected.

The NSS is a non-partisan organisation; whoever governs we will hold them to account on the issues that matter to our members and supporters. We will continue to lobby all parties to adopt secular reforms which will make society, our education system, and the law fairer for all.

Bleary-eyed, the NSS staff are at their desks today ready for another day's campaigning – and assisting parents and staff dealing with unwanted religious intrusion in their schools.

No government has yet grappled with the vast social changes our country has seen in the last sixty years: the collapse in the established Church, the unprecedented explosion of diversity of and in religions, the significant rise of the non-religious demographic, new forms of pluralism and new sectarian conflicts. These all demonstrate the urgent need to end religious privilege and rethink religion's public role.

With Theresa May – and her chief of staff Nick Timothy's – reputation taking a huge hit, it's not clear how committed the Government will be to their plans to open more divisive and discriminatory faith schools, including a new wave of 100% religiously selective academies. If the Government can't get their grammar school proposals through then the free-school proposals – despite not needing Parliamentary approval – may also stall. We certainly hope so. We also have a religious education system, including a requirement for compulsory worship, that was designed in the forties. These need to be reviewed and we'll be campaigning to ensure they are.

Progressive developments such as the advancement of equality and human rights have met a backlash with a false but widespread narrative that these have undermined religious freedom. The DUP, who Theresa May could now rely upon to a run a minority government, have long argued for increased religious exemptions to equality legislation – principally to allow religious businesses to discriminate against LGBT customers – and have been instrumental in blocking marriage equality and abortion reform in Northern Ireland. A rich vein of creationism runs through the party. What influence these ideas have will have to be seen.

It certainly looks like we'll be living in interesting times.