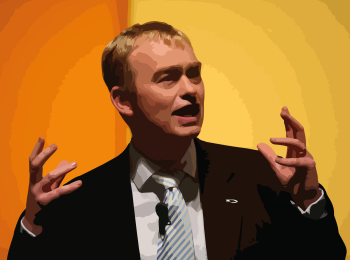 So, does the former Lib Dem leader Tim Farron now join the ranks of the "persecuted Christians" that some elements of the evangelical Christian movement in this country insist is growing? Was he hounded out of his position because of anti-Christian bigotry?

Or did the bigotry that characterises his brand of conservative Christianity make him a totally unsustainable leader of a liberal political party?

Brian Paddick, the LibDem front bencher in the House of Lords couldn't take Mr Farron's contradictory stance on the issues of homosexuality and abortion, and resigned yesterday. Within hours, Mr Farron, too, had stepped down as party leader.

Mr Farron, in his resignation statement, said: "The consequences of the focus on my faith is that I have found myself torn between living as a faithful Christian and serving as a political leader. A better, wiser person may have been able to deal with this more successfully, to remain faithful to Christ while leading a political party in the current environment. To be a leader, particularly of a progressive liberal party in 2017 and to live as a committed Christian and to hold faithful to the Bible's teaching has felt impossible for me."

But he also asserted that society is not liberal if it cannot tolerate a man of faith as a party leader.

These developments will come as blessed relief to many Lib Dems. If reaction on social media is anything to go by, there will be dancing in the streets by some.

In one way it is clear cut. Mr Farron was trying to juggle two entirely contradictory points of view.

His Christianity is obviously extremely important to him but he insisted that at no time would he attempt to impose it on anyone else. Other evangelical Christians (some of whom, as Farron admits, are in parliament) spend their whole time trying to enforce their own biblical view of the world on to other people. Some of them have entered parliament for that express purpose.

In another way we, as secularists, are charged to respect people's freedom of religion, their right to worship and believe whatever they want. On that basis Mr Farron was a secularist – he said he supported the party's pro- disestablishment stance and policy of ending discriminatory admissions to 'faith schools'. He thought he could be a Christian and not let that intrude into his politics.

He has now discovered that such hefty contradictions are impossible to sustain. His religious beliefs and his political beliefs inevitably collided, and when the time came for him to make a choice, he chose Jesus.

At least that is honest, and Mr Farron should be respected for that.

But he was not hounded out of the leadership by his party alone. The public saw Mr Farron's conflicted conscience clearly on display during the election campaign. They didn't like it. The LibDems faltered at a time when they should have been resurgent.

Whether Mr Farron's apparently reformed political views were perceived by the electorate as insincere we won't know. Whether such a perception influenced potential voters, we also won't ever know.

The British people are less and less inclined to support overt religion in politics. You can see this in the reaction to Mrs May's proposed arrangement with the DUP, a party of extreme religious conviction. We do not want this sanctimonious sectarianism – so destructive in Northern Ireland - introduced on to the mainland. We do not want the illiberal views of Arlene Foster and her creationist crew to intrude into our lives in any way.

Of course, the Prime Minister herself could one day find herself in a similar bind to that of Tim Farron. She, too, is an overt Christian, repeatedly informing us that she is the daughter of a vicar, repeatedly being filmed going to church on Sunday, as though to suggest some kind of superior moral standing, but then claiming that Christians are somehow discouraged from speaking out about their faith. On the contrary, it sometimes seems that some Christians in politics don't know when to shut up.

But this idea that Christians are being somehow silenced and side-lined because they don't have universal approval is itself intolerant. Why shouldn't those who don't like religion be able to say so? Respect has to be earned, it can't be imposed by divine right. If a Christian or a Muslim or any other religious figure behaves in an admirable way, he or she will gain admiration. But it cannot be assumed that admiration and respect will follow simply because that individual has a religious belief. Those days are long gone.

Ipsos MORI conducted a poll in 2012 among those who had identified themselves Christian in the preceding year's census. It found that: 73% strongly agree or tend to agree that religion should not have a special influence on public policy. 78% say Christianity would have no, or not very much, influence on how they vote in general elections.

More pertinently, 73% of respondents believe that 'people with very strong religious beliefs are often too intolerant of others'. This view was held by 82% of people who class themselves as non-religious, and 63% of those who consider themselves religious.

This does not bode well for Mrs May's appeal to the intolerant DUP.

We have seen previous clashes between religion and politics. Ruth Kelly, who was a minister in Tony Blair's Government, kept secret her involvement with the sinister and extremist Catholic organisation, Opus Dei. She had been allowed to miss votes on social policy that were part of the Labour Party's manifesto but which clashed with her own religious convictions. In a free parliamentary vote on 20 May 2008, Kelly voted for cutting the upper limit for abortions from 24 to 12 weeks, along with two other Catholic cabinet ministers Des Browne and Paul Murphy. She opposed lowering the age of consent for homosexuality, as well as voting against placing children with homosexuals for adoption. Out of fourteen votes during the Blair government surrounding the political issues of homosexuality, Ruth Kelly had only attended two.Once her religious allegiances were exposed and it was clear that they were being put ahead of the Party's interests – particularly as she was a minister - she had to resign.

Tony Blair's Catholicism, on the other hand, was also kept concealed until after he left Downing Street, but it did not seem to impede in any way the Party's reformist agenda. In that sense, Blair was a secularist in that his religion and his politics were always separated. "We don't do God", as Alistair Campbell so famously put it. What he meant was, "Mr Blair doesn't do God in parliament, but at home he does".

That approach would be acceptable to any secularist. But those politicians who feel it is their religious duty to promote the teachings of their faith above the wishes of their constituents, should be honest and transparent with those who have elected them. They should also be challenged.

The National Secular Society will continue to be vigilant with the new parliament intake. And, if the surveys are correct, the people who elected them will too.