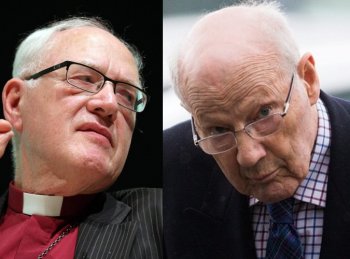 The Church concealed evidence of criminality and colluded to protect an abusive bishop. Only external oversight will guarantee that church safeguarding practices comply with secular standards, argues Richard Scorer.

With the publication of the Gibb report the Church of England has finally admitted what Ball's victims have long believed ­– that senior figures in the church, in particular former Archbishop of Canterbury George Carey, concealed evidence of Ball's criminality and colluded to protect him. Where do we go from here?

At the heart of the Ball scandal, as I explained on this site in July last year, is that in early 1993, when Ball was under police investigation for a single offence, against a young man called Neil Todd, Lambeth Palace was aware of no fewer than 6 other allegations against Ball, but failed to pass these to the police. Worse still, in full knowledge of these other allegations, Carey wrote to the police to tell them that the Todd allegation was "most unrepresentative" of Ball's behaviour.

When I raised the spectre of cover up at a hearing of the Independent Inquiry into Child Sexual Abuse (IICSA) in March 2016, Lord Carey told the media that he had "no knowledge of the matters" I was referring to. But the Gibb report now lays bare Carey's intimate involvement in the maneouvres by which Ball escaped justice for a further 22 years, and concludes that Carey's failure to pass evidence to the police "must give rise to a perception of deliberate concealment".

Self-evidently, the Ball case involves more than a "perception" of concealment; it involves concealment, pure and simple, so one wonders whether Gibb's wording here was softened during the process of "Maxwellisation", by which those criticised in a report are given the opportunity, pre-publication, to challenge the report's conclusions. Of course, the church's "Abuse of Faith", as Gibb calls it, went well beyond concealment. Even after Ball's caution and resignation in 1993, senior church leaders denigrated his victims. They allowed Ball to regain much of his standing within the Church, and many of his preaching privileges. They allowed him to carry out priestly duties in schools. Knowing full well that he was the subject of multiple allegations of sex abuse, they sought to rehabilitate him. And then under Rowan Williams, Carey's successor, progress in tackling sex abuse generally within the Church was "lamentably slow".

An unavoidable question is whether, in concealing evidence of Ball's criminality, senior figures in the Church of England, including Carey, may have committed criminal offences, the most obvious one being misconduct in public office. The Ball case itself established that a Church of England bishop is a public official. Misconduct in public office is defined as "a public officer wilfully neglecting to perform his duty and/or wilfully misconducting himself to such a degree as to amount to an abuse of the public's trust in the office holder, without reasonable excuse or justification". Plainly, there is a case to answer.

Some will say that police resources are better spent on contemporary challenges than on prosecuting failings which occurred over 20 years ago. But this would be to ignore the gravity of what occurred, and its long lasting consequences, which included the suicide of Neil Todd, who over two decades was vilified by the Church as a liar and a gold-digger. According to Gibb, Carey decided that Ball was "basically innocent". The Archbishop of Canterbury decided, in other words, that he was entitled to act as judge and jury and substitute his own view for that of the criminal courts. But the law is not just for little people; it applies to Archbishops as well. So the question of criminal offences has to be addressed.

What of the wider implications of the report? In its forensic analysis of the factual detail of this tawdry cover up, Gibb is a pretty strong piece of work. In its analysis of the church culture which led to this scandal, and especially in terms of recommendations for change, the report is much weaker.

On religious culture, and the manifold ways in which it can be misused by abusers, the report certainly makes a number of pertinent observations. It notes that Ball's abuse was "charged with religious intensity" and that in committing his offences Ball "exploited the significance of ritual, particularly in the Anglo-Catholic tradition". For Ball religious rites became "a mask for abuse, and theology was used as a way of justifying abuse". The evil of what he did was "compounded by his message that this made the victims more special and more holy".

Gibb also acknowledges that religious communities of the type established by Ball, which purport to offer support and spiritual guidance, are peculiarly likely to attract vulnerable people who may be troubled and seeking direction, and for that same reason are also likely to attract perpetrators who seek to use the respect and faith attaching to religion as a cover for abuse. As Gibb notes, such communities are also often closed communities, lacking the external oversight so crucial for preventing abuse.

Finally, Gibb reiterates that in Christian organisations abusers can sometimes be protected from accountability by a distorted concept of forgiveness. All these points are well made, and help to explain why it is that although many secular institutions have also suffered from abuse scandals, religious institutions seem to be particularly susceptible to such scandals and ill-equipped to confront them. However, in my view the report fails to acknowledge something even darker in the Church of England – a culture of bullying and intimidation of against those who speak out. This culture has been powerfully described by Rev Graham Sawyer, a Ball survivor who is also a Church of England vicar, and who has experienced the church's treatment of whistleblowers at first hand. For the public, who increasingly tend to regard the Church of England as slightly ridiculous but largely benign, this aspect of the church's culture may come as a surprise, but it certainly exists, even if it is hidden under a veneer of English politeness.

In terms of proposals for change, the report's 12 recommendations are astonishingly anodyne, and seem to be grounded in an assumption that all is now basically well with safeguarding practice in the Church, although also buried in the report is an acknowledgement that diocesan safeguarding work has often been inadequately resourced.

Most extraordinary, however, is the absence of any insistence that abuse allegations be reported to external authorities under a mandatory reporting regime. This is the obvious and undeniable lesson from Ball – the Church of England cannot be allowed to carry on marking its own homework. Of course, Gibb may be assuming, as I also find many journalists now do, that reporting of allegations to external authorities is already the norm. But because child abuse often takes many years, even decades, to come to light, and given the history now exposed, we cannot presume this with any confidence. The main lesson of Gibb, although the report does not say so, is that only external oversight will guarantee that church safeguarding practices comply with secular standards. We need mandatory reporting.

Richard Scorer is a solicitor who acts for some of Peter Ball's victims, and is an NSS council member. You can follow him on Twitter @richard_scorer. The views expressed in our blogs are those of the author and may not necessarily represent the views of the NSS.