Why are we still allowing religion to retard young people’s education and health rights? 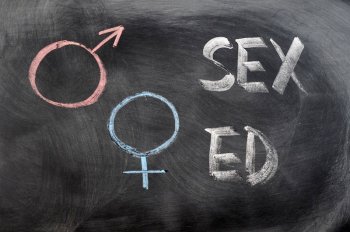 The Government's proposals on Relationships and Sex Education are a welcome step in the right direction – but religious opt outs mean many children will continue to be left behind, writes Stephen Evans.

The Government's move to make Relationships and Sex Education mandatory in schools has been enthusiastically welcomed by all but religious conservatives. But whilst the new legislation is a very welcome step in the right direction, the decision to allow parental opt-outs and give faith schools leeway to teach the subject in accordance with their religion means some children will be left behind. This isn't acceptable.

The move towards statutory RSE comes amid increasing concerns around child sexual exploitation, sexual health and the growing risks associated with growing up in a digital age. There is a clear need for schools to tackle issues around sex, relationships, consent, gender equality, LGBT-inclusivity and sexuality. If there is a compelling case to act in relation to pupil safety then surely the proposals should apply equally to all children and young people, irrespective of their religious or cultural background.

Yet under the proposals, some of the children and young people most in need of this information, those denied it at home by socially or religiously conservative parents, will still be denied it.

The Government says it is important that we "ensure universal coverage for all pupils and improved quality" only to then undermine itself by granting de-facto opt-outs to religious schools.

All children deserve the same chances in life. Good quality comprehensive sex education should be every child's right. Instead, under these proposals, the subject will continue to be delivered according to the whims of religious authorities, rather than the needs of young people. These proposals risk reducing children in faith schools and from conservative religious backgrounds to second class status.

The limited scope of the subject also appears to be a sop to religion anxieties, fed by inaccurate tabloid 'scare' stories. Why, for example, why is the Government limiting primary school obligations to 'relationships education'? It is well established that the onset of puberty and sexual awareness, including of sexual orientation, occur for many children before they reach secondary school. Primary school children need age-appropriate education around the body, safe and unsafe touch, and puberty. What good reason is there to leave them in the dark?

The Government will hold discussions on what should be taught to children, and at what age, and there will be a full public consultation later this year. But the lack of explicit reference to gay, lesbian, bisexual and transgender (LGBT) inclusivity in the proposals is a concern.

The legislation seems to fall short of the latest recommendation from the Committee of the Rights of the Child which called on the UK to "Ensure that meaningful sexual and reproductive health education is part of the mandatory school curriculum for all schools".

"such education should provide age-appropriate information on: confidential sexual and reproductive health-care services; contraceptives; prevention of sexual abuse or exploitation, including sexual bullying; available support in cases of such abuse and exploitation; and sexuality, including that of LGBT children."

The Government argues that specifying the content of the subjects on the face of primary legislation would be "too prescriptive" and would run the risk of the legislation becoming "quickly out of date as the world changes".

This risks giving the religious groups running schools the wriggle room they wanted to avoid topics they don't like. The areas listed by the UN aren't going "out of date" anytime soon and should be explicitly included and without exception.

There is a pressing need to promote inclusion and acceptance in education. A major Government survey of 15 year olds has shown that health indicators/outcomes and happiness levels are materially worse for gay adolescents/teenagers and very much worse still for bisexual adolescents/teenagers.

Extensive polling of British Muslim attitudes conducted by ICM found that 52% thought homosexuality should be illegal in Britain. 39% agreed that "wives should always obey their husbands".

A recent family court case in which a transgender woman was denied contact with her ultra-Orthodox Jewish children highlighted the corrosive effect of intolerant attitudes amongst ultra‐Orthodox Jewish communities - attitudes that are being perpetuated by religious schools, where homosexuality and transsexuality are unmentionable.

Even human biology is deemed beyond the pale for some faith schools. The publicly funded Yesodey Hatorah secondary girls' school in Hackney was rebuked by the exam regulator after a National Secular Society investigation revealed it was censoring exam paper questions on human reproduction - a common practice, it claimed, amongst charedi schools throughout England.

Organised religion's desire to control our collective sex lives is of course nothing new. In 1877 the National Secular Society's founder Charles Bradlaugh and Annie Besant, a secularist and campaigner for women's rights, were brought to trial for 'obscenity' after disseminating a pamphlet on birth control. We can't allow a 19th century mindset to dictate modern education policy.

That's exactly what Justine Greening is doing by insisting that RSE needs to be "sensitive to the needs of the local community" and taught in accordance with the tenets of various religions in publicly funded faith schools - schools which are often attended by children from all religion and belief backgrounds.

Now that statutory RSE is secure, they key battleground will be over subject content and accompanying guidance. But the omens aren't good for the fight to ensure that no child is left behind. Announcing the Government's intentions in Parliament, the Minister for Vulnerable Children and Families, Edward Timpson MP, stressed that religious faith "will be respected as it has been in the past: that is reflected in the Bill, and will be reflected in the regulations and statutory guidance that will follow."

The Government's so called "21st century relationships and sex education" will not be worthy of that billing if it continues to allow young people's education and health rights to be retarded by religion.

Schools are the ideal place to foster a more tolerant and inclusive Britain and to encourage a healthier, more knowledgeable and sexually autonomous younger generation. Education policy that panders to religion will fall short of delivering this.