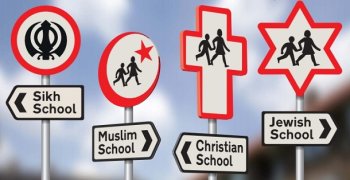 The Prime Minister has expressed her concern that "for too many children, a good school place remains out of reach" and that their "options [are] determined by where they live or how much money their parents have."

But their options are also determined by their parents' faith, or at least their willingness to fake it to get into the most convenient school. But she doesn't seem concerned about that.

The Government is going to plough more money into free schools, many of which will surely have a religious ethos. There are even reports that to boost integration 'Christian schools' will be opened in 'Muslim areas'.

There are stronger arguments against faith schools than this, but the cost of opening and operating duplicated facilities to cater for every religious minority with the sufficient size and local political clout to get their own school must be unjustifiably expensive.

The UK suffers from a fantastic level of national debt, public services face cuts, some schools are even reportedly asking for donations to stave off staff losses, and yet despite these incredible pressures, many of the new schools the Government is opening will only cater to one segment of the local population.

The ludicrous result of these conditions is seen in Northern Ireland, where around 20% of school places are empty. Any system that segregates is going to be riddled with pockets of inefficiency: undersubscribed minority faith schools with empty seats in classrooms, while other schools in the same area are badly oversubscribed.

The stronger arguments to one side, how can the cost of duplicative faith schools, in these conditions, possible be justified?

Whatever else the objections to an education system that discriminates, we cannot afford to have redundant school places and duplicate buildings for each faith group that wants one.

Meanwhile Labour howl against grammar schools 'segregating' children – but totally ignore actual segregation when it is done on religious grounds.

Whether you support grammar schools or not, the separation of children is done for an academic purpose. It isn't 'segregation' (which suggests racial or religious partition) but a form of differentiation.

There is however actual segregation going on across the country, with no academic rationale, and it is being accelerated by the Government. Yet Labour have nothing to say about it. In some areas, where religion and ethnicity are closely correlated, separating children by religious background has the effect of racial segregation.

To rail against segregation in schooling when it concerns grammars, and ignore the genuine example of segregation by religion is incomprehensible.

Segregation on religious grounds is a strange blind spot, and one that afflicts both of the major parties.

Where faith schools are concerned Labour set aside their 'principled' objection to 'segregation', and the Government put aside their commitment to run public services in the most efficient and cost effective way possible.