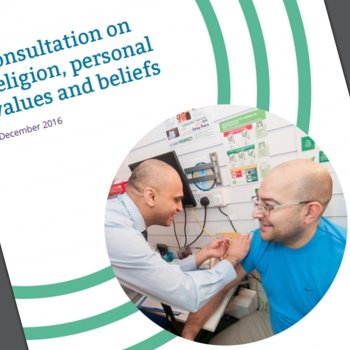 With the regulator considering curtailing 'conscience' objections to contraception prescriptions, Keith Porteous Wood urges supporters to respond to the consultation in the interests of vulnerable patients.

The General Pharmaceutical Council (GPhC) has launched a consultation on "religion, personal values and beliefs in pharmacy practice" which focuses on the extent to which 'conscience' opt-outs to pharmacists should be permitted. This principally relates to opt-outs on religious grounds over Emergency Hormonal Contraception, which some pharmacists with orthodox religious beliefs consider impermissible. The GPhC is seeking to establish what balance should be struck between, on the one hand, pharmacists' freedom of conscience, and on the other the safety and care of patients - particularly those whose philosophical perspectives do not rule out EHC.

The proposals in this consultation would, in the GPhC's view, "change the expectations of pharmacy professionals when their religion, personal values or beliefs might, in certain circumstances, impact on their ability to provide services, and shift the balance in favour of the needs and rights of the person in their care."

The GPhC acknowledges the latest consultation was "prompted by feedback" from the 2016 consultation "and reflect[s] the relevant legal framework of human rights and equality law". We commend the GPhC for its responsiveness and tackling this contentious issue, so important to patient care.

The Secular Medical Forum (SMF) within the NSS responded to the first consultation, drawing attention to the above conflict. As the consultation was closing, we drew the GPhC's attention to supportive case law that had just arisen involving the US Supreme Court. Unrelated to this case, an NSS member needing EHC when travelling in the US had earlier complained of having been refused it in several urban pharmacies.

Over the last decade, the NSS has raised concerns, both in consultations and in response to particular cases which arose, about the seemingly growing incidence of 'conscience' based refusals in the UK to dispense EHC.

The US appeals court supportive decision in this case was Stormans Inc. v. Wiesman (Wiesman acting for the state) made final by the Supreme Court's refusal to take the case. It concluded that the state (whose regulations were being challenged) had a "legitimate interest in ensuring that its citizens have safe and timely access to their lawful and lawfully prescribed medications". The court concluded that religious freedom had been adequately catered for as the regulations permitted a "religiously objecting individual pharmacist to deny delivery", however this was subject to "another pharmacist working for the pharmacy provid[ing] timely delivery".

It follows that, to the extent that a pharmacist is unwilling to dispense EHC even when there is no one else willing to do so in the pharmacy, they would need to work somewhere where this could never arise.

Needless to say, the decision enraged evangelical organisations there. And similarly, the timely move by the new regulator, the GPhC, is provoking a fierce reaction in some religious quarters.

The secularist position, proposed by the NSS and SMF, is similar to what is proposed by the GPhC and endorsed by the US courts. All support conscience opt-outs, provided the patient is not disadvantaged.

Currently, pharmacies refusing to dispense are obliged to refer patients to another pharmacy. We have evidence that the obligatory referral does not always happen. As there is not even any documentation required to evidence refusal, checking whether referral is always offered is currently impossible, and this puts patients at an unnecessarily increased risk.

Even where a referral is made, there is no guarantee that the referred pharmacist will have the EHC in stock and will be prepared to dispense it; or that the referred pharmacy is open and sufficiently nearby for the patient to reach. Given the emergency nature of many requests and that patients may not have the requisite confidence, time, money or access to necessary transport, this refusal could directly result in great distress and possibly an unwanted pregnancy. The referring pharmacist has no obligation even to enquire into such key practical potential obstacles.

Good medical practice would dictate that a prescription presented for EHC has resulted from a consultation with the patient whose medical and social background the GP will know or will have ascertained and that a suitable examination and informed discussion will have taken place; a pharmacist objecting to dispensing the prescription is unlikely to know all this information. In such cases it is especially egregious that the patient's prescription should be overridden by a pharmacist on 'conscience' grounds. The GP may have made the decision which could in some - admittedly extreme - circumstances be based on an assessment of potentially dire consequences of conception, possibly even fatal ones. This could, for example, be if the patient was medically unfit to bear a child or even that she could be subject to "honour"-based, and potentially life-threatening, violence.

GP waiting lists are getting longer and patients seeking EHC may not be able to see their GP in time, and the Government has made known its wish that pharmacists take on more to lighten the work burden of GPs. So we hope the GPhC will also find ways of ensuring that the growing proportion of those without prescriptions seeking EHC are protected from the potentially adverse consequences where the exercise of pharmacists' conscience relates to an over-the-counter sale.

For opponents, keen to be portrayed as victims, patient care doesn't seem as high on their priorities as the exercise of their own conscience. One has only to read their consultation responses to see the absence of the patient in their discussions.

The response to the earlier consultation from Christians in Pharmacy implies Christian pharmacists are "pro-life", and therefore opposed in principle to EHC to the extent of being "unable" to handle EHC. While some Christian pharmacists no doubt do hold such extreme anti-choice views, it would seem very surprising if all do.

While the GPhC is proposing moving towards greater consideration of patient care, Christians in Pharmacy's direction of travel is resolutely in the opposite direction: scrapping even the, albeit unsatisfactory, obligation to refer. They contend that "the strongly held moral convictions of the pharmacy practitioner may prevent them, in good conscience, from actively recommending another source of supply … without themselves making a direct referral." [their emphasis]

Of equal concern, they want the default position to be exercising conscience, with those not wishing to do so to "opt in". Furthermore, they even want the conscience clause that applies in law to direct involvement with abortion extended to the very different situation of dispensing EHC, even where this is prescribed.

The Conservative Home website has hosted a blog on this issue taking a similar line to the Christians in Pharmacy, justifying its call for a statutory abortion opt out by explicitly describing the morning after pill as an "abortifacient", which it isn't.

Christians in Pharmacy paints religious pharmacists as victims, rather than those denied their services. The Conservative Home blog takes this questionable victimhood to new depths, inexplicably claiming the proposal "raises the threat of criminal [my emphasis] sanctions for those who do exercise such a conscientious objection" and concluding that it is "hard to see how any person with traditional faith views on abortion could in future enter the profession, and it is only a matter of time before such careers are closed down as options for those who hold such views".

Chillingly, the Conservative Home blog concludes that "it is perhaps time our Health Secretary, Jeremy Hunt, called in [the GPhC Chair], Nigel Clarke, for a chat over a coffee to discuss what possible public policy objectives would be served by denying the right of conscientious objection to those of faith in the pharmacy profession."

The Christian lobbying group CARE has gone even further in its response. It considers that if the proposed regulations come into force, pharmacists will be faced with some "impossible choices", one of which is "to work with another pharmacist who may not share their views". This implies that the pharmacies they want to work in are not welcome to pharmacists who are prepared to dispense EHC. Even if the pharmacy happens to be the only one for miles around, they want to deny choice to all patients to receive EHC. If CARE's briefing accurately demonstrates the attitude of a significant number of pharmacists to their work, it is a compelling argument for, rather than against, the GPhC changing the regulations in the way they are contemplating.

Further, CARE consider the regulations would impinge on pharmacists "living out their faith privately" "undermining their … freedom of religion".

The changes proposed do not adversely impact on (the qualified right of) manifestation of religion. Pharmacists will remain free not to use EHC themselves or to argue against others doing so, but pharmacies would not free to prevent others doing so by refusing to dispense prescriptions.

And CARE want this closed shop even to extend to customers. Their most far-fetched objection is to complain that customers would be unable to "access a service provider who either shares his or her values or at least has the option of doing so". This is just a whisker short of suggesting that customers are entitled to pharmacies staffed by people who are not just religious but orthodox in their views. That should keep the equality lawyers in business for some time.

These self-serving arguments show scant regard for patients and I urge those who care about vulnerable women being denied EHC to respond positively to the consultation by 7 March at the latest.