It’s time for an end to special religious privileges: we need a secular state 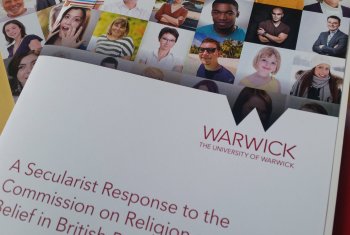 Should the Anglican peers in the Lords be joined by religious leaders from other faiths? Ought the BBC be required to make religious programmes? Should religious groups enjoy more legal protection? The Commission on Religion and Belief in British Public Life set out 37 recommendations – which, argues Steven Kettell, are deeply problematic in a society where half the population say they have no religion.

The last few decades have seen significant changes to the landscape of religion and belief in Britain. According to surveys by British Social Attitudes the proportion of the adult population describing themselves as 'Christian' fell from 67% to 41.7% between 1983 and 2014, while the proportion self-identifying as having 'no religion' rose from 31% to 48.9% over the same period. These developments pose a number of important challenges, thrusting concerns about social cohesion, debates around national identity and questions about balancing the rights and duties of citizenship to the forefront of British public life.

In December 2015 the Commission on Religion and Belief in British Public Life (CORAB) published a report entitled: 'Living With Difference'. The report made a total of 37 recommendations, covering a variety of themes. A notable feature of the CORAB report, however, was that it paid insufficient attention to secular views and voices. Of the twenty members making up the Commission, just one – Andrew Copson, the chief executive of the British Humanist Association – was from a 'non-religious' organisation. And despite acknowledging the rise of non-religion and the growing diversity of religion and belief in Britain, the CORAB recommendations sought a more prominent role for faith in public life.

In spring 2016 a panel of experts convened at the University of Warwick to consider the Commission's report. Our findings, which are supported by secularists from a range of spheres – including academics, activists and representatives from Britain's leading campaign groups – have now been published as a report entitled: 'A Secularist Response'.

While being generally supportive of some of the CORAB recommendations (such as putting an end to the requirement for compulsory worship in schools, or refusing public funds to charitable organisations involved in proselytising), the principal thrust of the CORAB report remains deeply problematic. One of the key recommendations, for example, is for greater "religion and belief literacy" (a phrase that appears in the report no fewer than thirteen times). But it is simply not clear what the rationale for greater literacy is (especially in a context of religious decline) and no evidence in support of this point is ever actually presented. Similarly, CORAB calls for religious representation in the House of Lords to be extended to give voice to a wider variety of faiths, and for national and civic events (such as the coronation) to be made more representative of British society. Britain, of course, is the only sovereign democratic country to have automatic religious representation in its legislature (a wholly anachronistic practice that has no place in a modern democratic society), and it is hard to see how the coronation – as a distinctly Anglican ceremony – could be made properly inclusive without losing its religious underpinnings. Possible alternatives, such as holding the coronation or investiture in an inclusive secular ceremony at Westminster Hall, are simply not discussed. Moreover, while calling for the pluralisation of civic ceremonies sounds entirely reasonable, the Commission's call for the inclusion of religious representatives from a wider variety of faiths gives unwarranted credence to the self-presentation of religious leaders as moral figures representing separate communities.

The CORAB report goes on to call (amongst other things) for religious coverage to remain a part of the BBC's charter (again with no justification – and in fact the charter makes no reference to 'religion' at all); for chaplaincy funding to be ring-fenced (we argue that religious organisations should fund their own chaplaincy provisions); and for charitable organisations based on religious principles to be given 'fair funding' (we object to government money being used to promote religious causes or viewpoints, and it is notable that CORAB fails to call for any reform or repeal of exemptions from equalities legislation allowing discrimination on the grounds of religion or belief).

The CORAB report ends by calling for a review of the law covering the categories of race, ethnicity and religion in order to correct any "unjust anomalies". Reasonable enough, you might think. But we have serious concerns that extending further legal protections to religious groups could lead to a curtailing of freedoms and an erosion of current safeguards (such as the freedom of expression safeguards contained in the Racial and Religious Hatred Act). There is, it is worth remembering, no right not to be insulted. Relatedly, the issue of separate systems of religious courts and tribunals also presents a number of concerns, not least the worrying potential for the abuse of vulnerable citizens. In our view, the use of such tribunals should be accompanied by strict conditions, including that all participants be fully informed in advance as to their rights in civil law, and that such bodies refrain from pretending to a legal status that they simply do not possess.

Taken together the CORAB recommendations are completely at odds with the realities of twenty-first century life in Britain. At a time when the majority of the British population belongs to no religion at all, proposals to extend the public role of faith amount to little more than an attempt to shore-up the crumbling towers of unwarranted religious privilege.

And while secularism is often presented as involving a curtailment of religious freedom, as an authoritarian attempt to force religion out of public life and to impose a particular (usually non-religious) worldview, the reality is that a secular state – by distancing itself from all systems of religion or belief – provides the best possible framework for guaranteeing equality for all citizens, and the best means of fostering a free, inclusive and democratic society in which people of all faiths and none can live harmoniously together.

The recommendations of the CORAB report, which defends and promotes religious privilege, are a recipe for increasing unfairness and division. Our response highlights the critical need for secular voices to be heard.

This article was originally published by the London School of Economics and is reproduced here with the permission of the author.