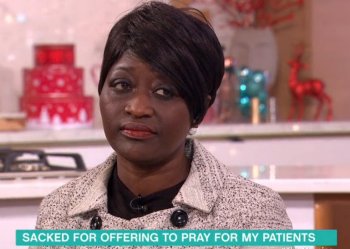 It has been another week in which we've seen Christians in the Middle East losing their lives to violence and persecution, but much media attention in the UK has instead focussed around the plight of a nurse, supposedly sacked for "offering to pray with her patients".

Sister Sarah Kuteh was employed by Dartford and Gravesham NHS Trust as a nurse in the surgical pre-assessment unit. Part of her job involved completing a pre-operative assessment form which includes asking patients scheduled for surgery about their religion or belief to ensure any religious requirements are understood prior to surgery.

But despite repeated warnings not to do so, Mrs Kuteh abused her position to evangelise her Christian faith to patients.

Speaking on ITV's This Morning, Mrs Kuteh made clear that if a patient told her they were not religious, instead of simply recording this as her job requires, she would challenge such patients about their beliefs and use the opportunity to proselytise.

Such behaviour is clearly a breach of the Nursing and Midwifery Council (NMC) Code of Conduct and, unsurprisingly, resulted in numerous complaints being made against her.

Mrs Kuteh has now become the latest in a long line of committed Christians to be paraded by Christian Concern, in order to peddle the false narrative that Christians in the UK are being persecuted for their beliefs.

To illustrate just how manipulative and dishonest Christian Concern's telling of the story is, it's worth reading the below statement from Dartford and Gravesham NHS Trust, explaining what really happened:

"We have a duty to our patients to ensure that when they are at their most vulnerable, they are not exposed to the unsolicited beliefs and/or views of others, religious or otherwise. Sarah Kuteh's dismissal was not because of any religious belief she held but how these beliefs were being conveyed to patients. Following several complaints from patients that the conversations were excessive, unwanted and not consensual her line manager directed her to concentrate on her nursing duties and refrain from preaching to patients. Regrettably there was no change in her conduct and the Trust felt it had no option but to handle her behaviour through the disciplinary process which resulted in her dismissal. The Trust felt given the full circumstance it acted appropriately and in the best interests of the patients in its care. Because her actions breached the Nursing and Midwifery Council (NMC) Code of Conduct, the case has been referred to the NMC."

Patients clearly deserve better than to be subject to this kind of intrusive and inappropriate behaviour when they are at their most vulnerable in hospital.

I'm quite sure Mrs Kuteh was acting with the best of intentions, but either she fails to understand the importance of professional standards of practice and behaviour, or chooses to ignore them. Either way, the hospital had a duty to act.

Defending her actions in the media, Mrs Kuteh said: "How could you treat any patient... just looking at the physical needs and not their spiritual needs."

The importance of 'spiritual care' is indeed recognised by the NHS. However, as the Royal College of Nursing's 'pocket guide to 'Spirituality in nursing care' makes clear, "spiritual care is not about imposing your own beliefs and values on another" or "using your position to convert".

It is about recognising and responding appropriately to people's needs. This is what Mrs Kuteh has failed to do. And as the NHS Trust that employed her has pointed out, the hospital fully supports the spiritual and religious needs of its patients and staff by providing a multi faith chaplaincy and facilities to accommodate all beliefs. In taking the action it has against Mrs Kuteh the hospital isn't neglecting patients' spiritual care, it is protecting it.

But none of this matters to those hell-bent on promulgating the false narrative of 'persecution' against Christians in Britain. They're simply pursuing an agenda of misleading the public into believing Christians need special exemptions from equality laws, enabling them to impose their religion on others or discriminate against gay people. They want a hierarchy of rights, with their religion at the top.

They're aided and abetted by media outlets happy to produce 'fake news' in order to sensationalise and sell papers. Take for example, the Daily Mail's coverage of Mrs Kuteh's story. Their headline read: Nurse is sacked for offering to pray with her patients despite call by equality watchdog to end persecution of Christians".

Mrs Kuteh wasn't simply sacked for 'offering to pray' with patients and the headline woefully misrepresents the Equality and Human Rights Commission's recent report which found no evidence that Christians were being persecuted in the UK. The EHRC has criticised politically correct organisations for their occasional over-sensitivity, but as their new guidance on religion and belief in the workplace makes absolutely clear, employers are well within their rights to place limits on discussions about religion or belief at work, particularly when it comes to treating patients in a healthcare setting.

Interestingly, this story was written by the Mail's religion and education correspondent Jonathan Petre, who has just been made head of media for the Archbishop of Canterbury. Let's hope that Justin Welby demands higher standards of accuracy and journalistic integrity from Mr Petre than his current employer does.

As for Mrs Kuteh, her case will now be heard by an employment tribunal, and once all the facts are laid bare, I fully expect the hospital to be vindicated. But for those claiming 'persecution' it hardly matters. With such an obliging media, any outcome is another opportunity to advance their agenda.