Sabbatarians have imposed their dogma on islanders for long enough, help them put a stop to it 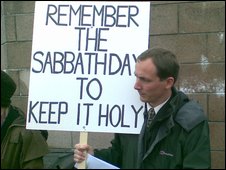 The National Secular Society is helping campaigners on the Isle of Lewis open a sports centre on a Sunday, currently blocked by a council who won't allow it on the Sabbath. It's hardly the first time Sabbatarians on Lewis have played this game.

The attempt by religious fundamentalists on the Western Isles of Scotland to stop families using a swimming pool on the Sabbath is not the first time the local council, the Comhairle nan Eilean Siar, has imposed its religious dogmatism on the whole community.

For many years public services on Lewis – no matter how much they are required or supported by local residents – have closed down on the Sabbath, all to enforce observance of an obscure and fundamentalist form of Calvinist Christianity.

As the Isle of Lewis' website notes, "The Western Isles culture remains very strong, particularly in its religious beliefs. Sundays remain a very special day, and many people observe strict compliance to the 'Free Church' traditional values." This is understating just how strict this 'compliance' is, and dramatically overstating how many people on Lewis actually observe the Sabbath in this way (or at all).

Historically, playpark swings were chained up on the Sabbath and no business opened, while more recently this century there have been battles in Stornoway over ferries arriving on Sundays and the start of flights to and from the mainland. These Sunday public transport services saw members of the Lord's Day Observance Society protesting vigorously on quayside and runway and prophesying doom and gloom for the islands. Reverend Alasdair Smith told the BBC two years ago that he could remember islanders used to be "horrified" if somebody was even riding a bicycle on a Sunday, and there are plentiful tales of people being scolded for performing simple household tasks such as hanging washing out to dry, or for wanting to play a leisurely round of golf.

One time journalist Peter May who as well as writing two prime time drama series for the BBC wrote the best-selling Hebrides, a trilogy of works set on the Western Isles of Scotland. In one of the books (Page 60) he describes an epiphany on his first Sunday on Lewis:

"My first Sunday in Stornoway was spent walking the streets in a fruitless search for lunch. Although, to our frustration, we would hear voices and laughter coming from behind the locked doors of several of the public houses in town. It was only later that we learned that the faithful would emerge from their church services at midday to slip straight into the pubs via the back door. You live and learn!"

But times have changed. A survey in 2015 by Families into Sport for Health (FiSH) found that 71% of respondents wanted the sports centre open on Sundays – as an earlier survey found in 2011.

FiSH say they have nine councillors who are supportive, but the rest of the council are putting up spurious concerns about the cost of Sunday opening. FiSH are now raising the funds themselves to donate to the Council, so if they reach their target the Council will have run out of excuses not to make this public facility available to all, regardless of some councillors' religious beliefs.

Behind the smokescreen of lack of funds lies the real objection from the remainder of the Council: religious belief. Sunday is their Sabbath and the staunch Presbyterians want to impose their fundamentalist interpretation of that Sabbath observance on the whole island. The same Council however permits similar facilities to be opened further south, on Barra and South Uist. As well as illustrating the difference between the more Catholic and less dogmatic south and the fiercely dogmatic Calvinist north of the Western Isles, this demonstrates the iron grip the Sabbatarians try to maintain in 'their' patch, in pursuit of their own sectarian interests.

In 2009 a small group of protestors demonstrated against the first Sunday ferry to the Scottish mainland with signs warning of the intrusion of "secular society" and admonishing "Remember the Sabbath day, to keep it holy". But they were countered by "200 islanders who gathered to cheer the vessel out of port."

Professor Donald MacLeod of the Free Church College said having a ferry on Sundays would "have a domino effect on church attendance and will change the community from a Christian civilisation to a secular, humanist society."

Reverend Dr James Tallach of the Free Presbyterian Church said, "We will not be tried at the end of the day, when all of us stand before the judgment seat of Christ, on the basis of EU law."

Another reverend warned that the consequences would "terrify parents".

This is what local people have had to put up with, believers or not. They have long since had enough and won't be bullied by other members of the Lewis community to observe their religious rules.

The battle over the public sports centre has been going on for many years, despite some private businesses now opening on Sunday. The Council, through the beliefs of many of its councillors, has no business imposing religious views on the whole island, and people across the UK can help the FiSH campaign to stand up to this religious bullying and intolerance.

Please join the crowdfunding effort to make sure families on Lewis can go swimming on Sundays.