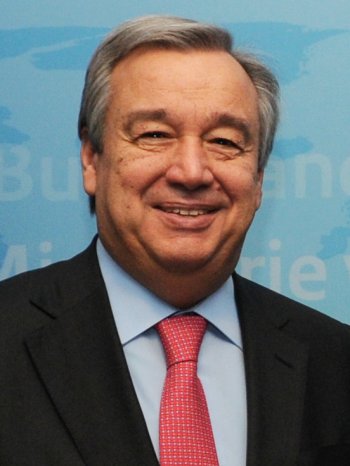 The former Portuguese Prime Minister Antonio Guterres has been officially appointed as the next UN secretary-general. I for one wish the Secretary General designate every success in his new role. He has clearly done a magnificent job as the UN's high commissioner for refugees and this as well as his political experience as Prime Minister of Portugal could hardly be better experience for his new job.

In our increasing fractious world, the position of Secretary General of the United Nations becomes ever more important. We need the best person for the job regardless of their religion or belief.

Strikingly, Mr Guterres is described by the normally measured Agence France Press as a "fervent Catholic". It says that while he allowed a referendum in 1996 on liberalization of Portugal's strict anti-abortion laws, his opposition to any change in the law contributed to the referendum's failure.

This decision was overturned by another referendum in 2007.

Abortion will have featured little if at all in Mr Guterres' activities on refugees, but will be important in the culture war raging at the UN alongside issues associated with contraception and homosexuality. These are also areas where conservative Catholic doctrine comes into conflict with individuals' human rights.

Mr Guterres is of course entitled to believe and practise whatever he wishes in his own private life, but he must not impose them in his role as Secretary General.

If, as reported, he campaigned against any change in the swingeing anti-abortion laws in Portugal, he may have crossed the line by imposing Catholic doctrine on others in contravention of their human rights.

At least one extremist Catholic pressure group appears already to be rubbing their hands with glee at his appointment. C-Fam, an NGO that claims the UN "undermine[s] the family" and is opposed to what it describes as "the UN system's promotion of abortion and LGBT rights" has already issued a statement congratulating Mr Guterres (see p. 26).

C-Fam points to Mr Guterres' "pro-life record", hoping "this reflects how he would exercise the important office [with which] he is being entrusted" and encouraging Mr Guterres to "defend the inherent dignity and worth of every human life from conception as well as the place of the family as the natural and fundamental group unit of society".

The Vatican takes the United Nations very seriously and is very powerful there. While the Vatican may be the smallest state in the world it is very active at the UN. At the Human Rights Council, it is the only country I have seen that always has two representatives in the chamber listening to every syllable as though their lives depend on it, handing over the headphones to each other like relay runners do the baton.

The liberal international group, Catholics for Choice (CfC), clearly regrets the Vatican/Holy See's status at the UN, the only religion to have a seat there, pointing out that "the Holy See is able to place items on the provisional agenda of the General Assembly, and it enjoys greater access to the plenary sessions of the UN and its main committees, as well as to the Security Council". And the Vatican can - and does - link up with others such as many Muslim majority nations who have similar conservative social agendas.

CfC points out that official documents from the last 20 years "are replete with objections" of the Holy See to the "majority consensus" in favour of "the expansion and strengthening of Sexual and Reproductive Health Rights" and "Gay Rights". Similarly, the Centre for Reproductive Rights considers the Vatican obstruct[s] women's sexual and reproductive health and rights, and, like CfC, questions the legitimacy of it being able to do so.

The Vatican's opposition to "artificial" contraception - a doctrine supported by very few ordinary Catholics - must lead to greater poverty, not to mention that obstructing the distribution of condoms must contribute to the needless transmission of disease.

As CFC observe: "doctors, nurses, and counsellors at Catholic facilities are often forbidden to distribute condoms as part of HIV and AIDS prevention and treatment programs".

When acting as Secretary General I would urge Guterres to embrace rather than obstruct the expansion and strengthening of Sexual and Reproductive Health and Rights and Gay Rights. The world will be watching and hoping fervently that he will not be unduly influenced by regressive religious forces.