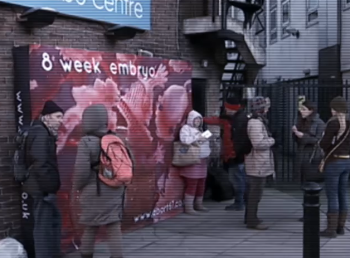 This week's Channel 4's Dispatches, presented by Cathy Newman, went undercover among the anti-abortion activists in the UK who are taking inspiration from the American anti-abortion movement, and the documentary exposed the shocking intimidation that women are subjected to outside abortion clinics in Britain.

Sadly there are many threats to women's rights – across Europe. Just this week Poland was forced to backtrack after mass demonstrations against a punitive new law that would have punished women with prison terms for having an abortion, even in the case of rape. The proposed legislation was a particularly extreme example of the state, with backing from elements of the Catholic Church, attacking women's rights.

But there are many other threats to women's right to access healthcare and make their own choices – as Dispatches showed, and in the UK these campaigns are being infused with well-practised tactics from the United States.

It was recently reported that an NHS Trust produced a leaflet directing distressed patients to such a vehemently anti-abortion organisation as GCN (Good Counsel Network).

Currently those without professed religious belief and links to organised religion have been disbarred from applying for some NHS employment, namely chaplaincy. And it was the spiritual pastoral care team of the South West London and St George's Mental Health Trust who produced material directing women to GCN.

If all NHS staff were appointed on merit rather than by virtue of their religious beliefs, there would be less risk of disreputable religious pressure groups being given such a platform; a platform used exclusively to try to bully and frighten women into making the choice that suits them and not necessarily the women and their families.

The Secular Medical Forum fully supports the rights of GCN members to make the right personal choice for themselves about abortion. However, we condemn the deplorable tactics used by GCN and similar organisations, shown by Dispatches, which try to frighten, misdirect, obstruct and even threaten women who might want to make a different choice. We urge all NHS trusts to take steps to ensure that all leaflets and NHS information is carefully scrutinised to ensure that only reputable organisations which don't contradict NHS values are included in signposting advice.

NHS trusts should be vigilant that the leaflets they produce and distribute to patients are safe and are not signposting patients to disreputable or single-interest organisations which misrepresent the medical and psychological evidence for their ends.

There is enough misinformation about abortion without an NHS Trust directing women to a group like the GCN.

One oft-repeated claim made by religious anti-abortionists, and heard in the programme, about the risks of breast cancer after abortion is simply not true and has no evidence to support it. That many fervently religious people believe that the ends justify the means explains but does not excuse such outright scaremongering. As Dispatches showed these lies continue even after the lack of evidence for their assertions is well known.

Women consider abortion for a variety of reasons. When they seek professional help to make the right decision for them and their family, it is vital that women are not placed under duress from or misinformed by religious pressure groups with one agenda- their own. Neutral professional counselling and support allows women to explore all the options in a non-judgmental climate. These options include the option to terminate or to continue with a pregnancy.

Dr Antony Lempert is the chair of the Secular Medical Forum. The views expressed in our blogs are those of the author and may not represent the views of the NSS.