Inclusive education: divisive faith schools are the elephant in the room 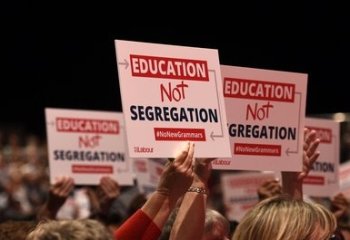 As an advocate for secular education, my hopes were raised momentarily this week when I heard Labour's Shadow Education Secretary, Angela Rayner, announce to her party conference that she was launching an 'education not segregation' campaign.

I soon realised however that the focus was entirely on segregation by ability. In front of a sea of delegates waving 'education not segregation' placards, Rayner told delegates that grammar schools "entrench division and increase inequality".

Yet she had nothing to say about Theresa May's regressive, divisive and dangerous plan to abolish the 50% cap on faith-based admissions, paving the way for a new wave of discriminatory religious schools.

When it comes to segregation and discrimination on religious grounds, religion, it seems, gets a free pass.

This is somewhat surprising given that it was Labour's persona non grata, Tony Blair, who oversaw a massive expansion in state-funded religious schooling. Keen to demonstrate his multiculturalist credentials, it was Blair who paved the way for Britain's burgeoning religiously and ethnically segregated minority faith schools.

The Government's own data shows what a horribly ghettoised education system this is creating. Britain's Jewish, Sikh, Hindu and Muslim schools are monocultural zones, silos of segregation that do nothing to foster greater social cohesion.

The Government recognises this and so has come up with a hotchpotch of half-baked half measures and sticking plasters to ensure faith schools "promote cohesion". It wants to 'teach integration' rather than give children from minority backgrounds the opportunity to just do it. These proposals are mere window dressing to disguise the fact that the Government is too beholden to organised religion to take the most obvious measure to remedy the separatism and segregation - the phasing out of faith schools.

The ethnic diversity of Britain's Catholic community means Catholic schools are far less culturally monochrome, but they still divide pupils along religious lines. Indeed, it was the Catholic Education Service and Jewish Board of Deputies' refusal to accept quotas for offering school places to pupils of other faith and belief backgrounds that prompted the Government to scrap the cap and allow yet more religious selection.

Free schools were sold as a 'parent and teacher-led schools revolution', but a shortage of school places and a paucity of school sponsors has forced the Government to turn to religious organisations to fill the gap. By acquiescing to the Catholic Church's discriminatory demands Theresa May has demonstrated her willingness to sacrifice equality and cohesion on the altar of faith school expansion.

The Church of England, meanwhile, is busily preparing itself for a massive expansion of its influence in the nation's education. Given that so few people attend its churches these days, it has decided that taxpayer-funded schools are to be its pulpits of the future.

In its trademark 'holier-than-thou' tone, the CofE reacted to the Government's proposals to extend religious selection by reassuring the nation that "Our schools are not faith schools for the faithful, they are Church schools for the community".

But in its latest report setting out its vision for education, the CofE reaffirms its commitment to offering pupils "an encounter with Jesus Christ and with Christian faith and practice". But it's more than just 'an encounter' they offer - church schools across the country are increasingly finding themselves under pressure to push the Christian message.

But should evangelism really be a strategic objective of a publicly funded 21st century education system? Education should open young minds, not indoctrinate them.

And let's not forget, the faith schools that Theresa May wants to open will be our local schools. All this talk of 'parental choice' is a red herring. Religiously selective schools choose pupils, often on the basis of a baptism certificate or a parent's churchgoing activities. And besides, however 'inclusive' faith schools claim to be, the simple fact is many parents don't want somebody else's religion imposed on their children whilst at school. Faith schools limit choice for many parents, not least the rapidly growing non-religious majority.

David Blunkett famously once said he wanted to "bottle the magic" of Christian schools, but there's nothing magical about a 'faith ethos' when it comes to academic success. Where church schools do achieve marginally better results, it is usually down to faith-based selection which, as the evidence shows, leads to social selection which unfairly benefits middle class and better-off parents.

A further expansion of faith schools and religious selection is the antithesis of inclusive education. Religious groups may have played a positive role in the historical development of state education in Britain, but the time has come to look to the future, and religious schooling looks hopelessly out of step with the needs of children growing up in Britain today.

As senior Conservative MP Ken Clarke told Education Secretary Justine Greening in Parliament recently, "we need to live in a society where we reduce barriers and improve contacts and integration between people of all faiths." He was absolutely right in calling on Secretary of State to "reconsider pretty fundamentally" her faith school proposals.

If you want to break down the barriers that divide British citizens, dividing children up by their parents' religion is exactly the wrong way to go about it. MPs on all sides need to recognise this.

There's nothing anti-religious about advocating for secular schools that are open, inclusive and equally welcoming to all children, whatever their religion and belief backgrounds.

Religion is fine for those that want it, but Britain's rapidly changing religious landscape screams for the scaling back of religious control of the classroom.

That's why progressives of all political and religious stripes should unite in opposing Theresa May's plans to further entrench segregation and discrimination in our schools by saying no to yet more faith schools.