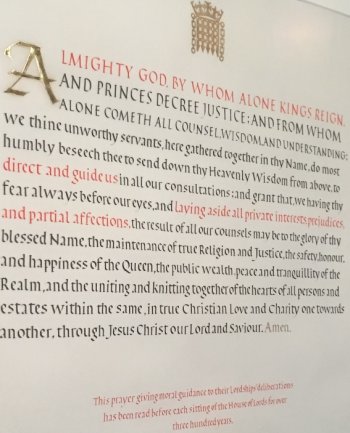 The Parliamentary recess provides welcome respite from the frenetic activity of the political battles being fought out in the chamber and corridors, allowing us to stand back and have a wry look at the institution itself, writes Keith Porteous Wood.

With the Parliamentarians on holiday, tourists are queueing around the block to walk through the chambers and other parts of the Palace of Westminster that are for the rest of the year completely off limits. Some at least must be struck by just how much the House of Lords in particular is imbued with religion.

The building itself, particularly inside, resembles a gothic cathedral. And visitors pass through the very heart of Parliament, from where the broadcasts are filmed, Central Lobby. It is dominated (apart from the chandelier, press the upward arrow in the photo) by depictions of the patron saints of the four countries of the UK.

The monarch, on the other hand, arrives by the Sovereign's entrance and proceeds to the Robing Room, in which a throne has been thoughtfully provided. But what huge picture, that clearly takes pride of place, does the monarch see facing them when sitting on the throne? One simply called "Religion" (see virtual tour). Playing second fiddle are paintings depicting the other chivalric virtues of hospitality, generosity, mercy, and courtesy. Third fiddle were fidelity and courage; they were planned but never executed.

An even larger painting totally dominates the Lords subsidiary chamber, unsurprisingly called the Moses Room. It is called "Moses bringing down the tables of the law from Mount Sinai".

In the Lords main chamber (which you can also tour virtually) the bench on the left has arm rests, the only bench to have them in the chamber. So, obviously therefore the Government front bench. Wrong! It is the bishops' bench, which – symbolically – is located between the Government front bench and the throne where the monarch sits at the state opening. And when during the Conservative/LibDem coalition there was insufficient space on the Government side for both parties, did the bishops courteously yield to requests to move to the other side of the Chamber? Of course not.

Until the suppression of the monasteries in 1539, the so-called Lords Spiritual, swelled by abbots and priors, formed the majority of the Lords. Despite the name, they were there largely because they were huge landowners. We will not explore in this blog the secularist questions of how they came to own so much land and the power – including the imposition of taxes such as tithes – which this gave them. After 1539 the lords spiritual were limited to the bishops.

The Civil War heralded the removal of bishops from 1642, but this lasted only until the Clergy Act 1661.

Particularly with the growth of cities with the industrial revolution, the number of bishoprics started to multiply out of control and a stop had to be called to their representation in the Lords. This came with the Bishopric of Manchester Act 1847 with the number capped at 26, all from English dioceses. There were never Scottish bishops as its "established" Church of Scotland does not have any. Irish and Welsh bishops were excluded following disestablishment in 1869 and 1914 respectively.

The 26 (out of 43 bishoprics) comprise the arch/bishops of Canterbury, York, London, Durham and Winchester with the rest going to the longest serving, although some changes have had to be made to fast track women. Bishops retire automatically at the age of 70 but some are given life peerages thereafter. Therefore, although there are only 26 "official" bishops, there are many more on the other benches as well as other religious figures such as former chief rabbis and what seems like an endless procession of self-declared Christian peers and those from other religions.

So, shockingly, by historic standards the current proportion of Lords Spiritual as they are referred to, 3% of the total, is as low as it has ever been, apart from the brief period when there were none at all. Having said that, The House of Lords is the only Parliament in a western democracy to grant any ex officio seats to clerics.

There is a duty bishop to say prayers at the start of every session, and before the Supreme Court was established, the duty bishop even opened the deliberations of the Law Lords with prayers, too.

The saying of prayers is done in secret, with non-parliamentarians excluded from the chamber, every entrance barred and cameras turned off. Prayers are said with the members kneeling on the benches with their backs to the centre, which is apparently ideal for those carrying swords.

The prayers have remained unchanged for centuries, for example "Almighty God, by whom alone Kings reign, and Princes decree justice; and from whom alone cometh all counsel, wisdom, and understanding; we thine unworthy servants …"

Our recently deceased and much-missed Honorary Associate, Lord Avebury, never attended prayers, always standing along with many others outside the chamber until they were finished. He always maintained the principle that prayers should not form part of official business; any if there were any they should be said in a different place. He also objected to the practical consequence: those who pray always getting the best seats, or even a seat at all – some even go to prayers for this reason. With his solution of any prayers being held elsewhere, those that wished to pray and those that didn't could all enter the chamber at the same time - after which official business could commence.

The invited guests at his memorial meeting included scores of parliamentarians, including two party leaders and the Lords Speaker. Such an opportunity could not be, and wasn't, missed to remind them all what Lord Avebury thought about Parliamentary prayers, and indeed bishops.

Of course, much of this rigmarole is the result of the establishment of the Church of England. But as the CofE has withered away and become a tiny, tiny denomination of a shrinking religion, not to mention the bishops' views on key social issues even being at odds with Anglicans, far less the country, we ask again – why does it continue to have such privilege?