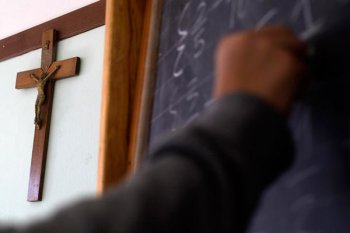 The NSS is regularly contacted by governors and staff at Church of England schools who are pressured by their diocese to promote a more rigorous 'Christian ethos' - whether or not it's suitable for their school community. Here's one governor's account of increasing religiosity at their local school.

In our village, like hundreds of others dotted over the English countryside, the church stands at one end of the village and the stone-built Victorian school at the other. Built in the 1870s by the vicar to serve the children of the village, the school is now Church of England Voluntary Aided.

While the congregation of the church dwindles, the population of the school – outstanding in its Ofsted inspection and popular with parents – has increased to full capacity. Little wonder, then, that the Parish sees its school population as securing the church members of the future.

A previous headteacher had recognised only too well that a C of E school holds in careful balance its church heritage with the need to serve local children with diverse religious (and non-religious) backgrounds. She had held the religiosity of the school in careful check.

Around 2-3 years ago new foundation governors and a new headteacher arrived. Subtle changes started to occur. Bibles were handed out to new children in reception class, Bible Society leaflets distributed to mark special occasions, an Open the Book team arrived to give weekly sessions. The law on collective worship was enforced more rigorously and children were 'told off' if they did not prayer properly and say 'amen'. Children wrote letters for an evangelical mission in Africa. Many are small changes, but they have accumulated to create an increasing religiosity in the school that has become very noticeable.

Those parents who did not want their children to be schooled in the Christian faith, but had selected the school as their only practical local, village school became increasingly concerned. Some met with the headteacher, as small groups or individually with requests for specific actions that would free their children from the more overt practices of the Christian faith and dogma. An important change was that rather than actively agree to tokens of the Christian faith that are over and above the daily act of worship and religious education - such as Bibles being given out - the parents have to make a special request for these to be withdrawn. Thus the overall approach has shifted to one which expects to impose the trappings of Christianity – irrespective of the children's faith or not – and parents have no choice but to monitor, intervene and opt out. There are many parents who are reluctant to intervene, concerned that they may be branded as trouble-makers or it may reflect negatively on their children.

As a longstanding co-opted governor, humanist in my outlook, the new foundation governor team asserted sole responsibility for the religious dimension of the school. Repeated requests that decisions be brought to the full governing body to be ratified were met with a frosty refusal. Oversight of the curriculum and worship in all schools, irrespective of governor role, is supposed to be the responsibility of the full governing body. As with the parents, persistently trying to monitor and check what was being decided by the Foundation governors was an ongoing task.

Open the Book sessions, given once weekly by a visiting group, were causing increasing concern among parents because, although the evangelical purpose is carefully masked, scratching the surface quickly reveals this to be so. A report by the Foundation Governor most involved in Open the Book made clear its mission to bring the Bible to children whose parents do not read it to them, or take them to church. God speaks through the Bible, the website states. My comment that this interventionist approach was not welcome to all parents, was again rebutted.

A few parents started to remove their children from Open the Book sessions – as is their right by law – finding that their children were starting to be influenced by beliefs in an all-powerful deity, quite against their family's secular outlook. However, my proposition to more parents that they might also wish to remove their children, as is their statutory right, if they did not agree with the approach of Open the Book reached the notice of one of the Foundation Governors snooping on social media. In response, I was sent an aggressive and abusive email, copied into governor colleagues, which referred to my humanist beliefs as 'Dawkins delusion' and implied that I was in league with troublesome parents and intent on undermining the Christian ethos of the school.

A final threat was that a Diocesan representative will be summoned to the school to 'read the riot act' to the out-of-line parents and governor and warning that 'if they don't like what they hear, they should choose another school'. In a rural region such as ours, taking children to a non-faith community school would necessitate a drive of several miles – assuming that a family has the resources of car and time. Village children who gain much from being part of a close-knit community of children would be divided according to religious belief. The threat is plainly unworkable, divisive and discriminatory. Besides, if all the non-Christian families did choose to go elsewhere, numbers in the school would be seriously depleted and the school in dire straits financially. The reality is that the non-Christian families sustain a school that fits with the Christian ethos preferred by only a proportion of the families. While this situation is plainly unfair, most are willing to put up with it, as long as the Christian dimension remains low-key and not doctrinaire – and, importantly, as long as they and their children are not made to feel in some way morally inferior or second best.

In the reconstitution of governing bodies, the then-Education Secretary, Michael Gove, called for smaller, more streamlined teams of governors selected primarily for their skills and no longer representative of certain constituencies or stakeholders. Yet, contrarily, voluntary aided schools still appoint foundation governors who must outnumber any other category of governor by 2. In a small village such as ours, finding church-goers ready to serve as governors means that in reality they are selected on the basis of their religious affiliation and not for the skills required by the governing body; thereby focussing their role even more on the religious dimension of the school. In the case of the Governor organising Open the Book sessions, he has transgressed one rule of governing – that governors should not actively engage in working with pupils, but should stand apart, impartial and dispassionate. His direct involvement has removed his ability to hear the view of the whole parent body and to appreciate that there are some parents for whom this is not wanted. He sees his position as serving the Parish and Diocese and in his zeal to carry out this calling he fails to recognise that his first commitment is, even-handedly, to serve ALL the children of the school of Christian faith, no-faith or other faiths.

In their day-to-day lives, busy at school among their friends, children are facing a myriad of small decisions about what is right or wrong and how their actions may impact on others. What they need are secular classes in ethics that teach them how to make those decisions with empathy for others, to never wittingly cause harm to any others and to understand and apply concepts of fairness. Even the simplest lesson in ethics would reveal the inequities of village schools tied by an anachronistic trust deed almost 150 years old – and, what's more, using public, tax payers' money to enforce a religiosity in their education to all children irrespective of their family's religious – or non-religious - upbringing.