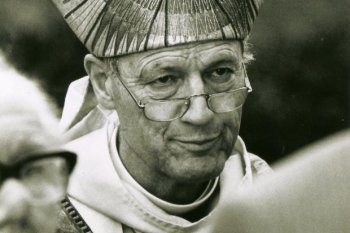 To recap: Peter Ball was a prominent Church of England Bishop who served from 1977 to 1991 as Bishop of Lewes (part of the now notorious Chichester diocese) and then, until his resignation in 1993, as Bishop of Gloucester. Ball was more than just another Bishop, however: exceptionally well connected in establishment circles, he was a personal friend of Prince Charles and dined regularly with Margaret Thatcher. In 1992 Ball was investigated by the police for sexual offences against a 15 year old boy, Neil Todd. There followed an extraordinary campaign in support of Ball: nearly 2000 letters of support including from many prominent establishment figures. In March 1993, on the basis that the Todd offence was a one-off lapse, Ball was let off with a caution. He resigned as Bishop of Gloucester, but continued to officiate at church services. The suspicion persisted, however, that Ball had committed many other offences. Eventually, in 2015, following a second police inquiry, he was convicted of multiple sexual crimes spanning several decades, and imprisoned.

Yet the question remains: what did the Church of England know about Ball's criminal behaviour, and when did it have that knowledge? In early 1993, when Ball was being investigated for the Todd offence, the then Archbishop of Canterbury George Carey wrote to the Chief Constable of Gloucester. The Todd allegation, Carey suggested, seemed "most improbable". Carey went on: "if he (Ball) is guilty of unprofessional behaviour it is quite unrepresentative of his style". Whilst noting that "special pleading" on Ball's behalf would be "entirely inappropriate", Carey went on to explain to the Chief Constable that he felt "justified in drawing to your attention the excruciating pain and torment " which these allegations have inevitably brought upon Ball, whom Carey described in the letter as an "honourable man, firmly concerned for the welfare of young people".

We have long suspected that at the time Carey's letter was written - in February 1993 - the Church of England had far more information about Ball's sexual offending than it had disclosed publicly, or indeed shared with police and prosecutors. Earlier this year, in oral submissions to the Goddard inquiry, I highlighted that another man - I called him AB - had written to Archbishop Carey in late 1992 to express concern about an incident 10 years earlier in which Ball had indecently assaulted him. We know from documents released in March that AB's allegation was considered in late 1992 by Carey's then chief of staff, the Right Rev Ronald Gordon. Gordon did not pursue it further; his notes of a meeting at which it was discussed indicate that he considered further investigation unnecessary because "there is already enough evidence to suggest a picture of what has been happening". By implication, the Church of England at that time already had extensive knowledge of allegations against Ball. AB's letter was never shared with the police- one reason, I explained, why Ball escaped justice for another 20 years.

But what the latest documents reveal is far more egregious: it seems that by early 1993, when George Carey was telling Gloucester police that the Todd allegation was "most unrepresentative" of Ball's style, the Church of England was aware of no fewer than six other allegations against Ball. And yet extraordinarily, none of these were shared with prosecuting authorities who were investigating the Todd offence. Indeed the Church of England kept that information under wraps until 2012, when a child protection investigator decided that it needed to be disclosed to the authorities. And despite the allegations against him, following his caution Ball was allowed to continue to officiate at Church of England services - putting other children and vulnerable adults at risk.

Because the documents released recently are partly redacted, we don't know precisely who in the Church of England knew about the other allegations. But earlier this year I posed some questions to George Carey:

· Why did you tell the Chief Constable in February 1993 that the allegation against Ball being investigated by the police was "improbable" and "unrepresentative" when you appear to have had an internal report suggesting otherwise?

· Why didn't you share the additional information in that report with the police, so they could follow up further lines of enquiry?

· Why did you procure for Ball a guarantee of no further prosecution, despite knowing of other allegations against him?

· Why did you allow Ball to continue to officiate at services after being cautioned, despite having a "picture of what has been happening"?

Following the latest revelations, these questions are even more serious and more urgent. The Church of England is our state church; its leaders hold public office and are accountable to the public for their actions, or should be. They must explain why serious allegations of sexual abuse were apparently withheld from the authorities with the result that a senior cleric was able to escape justice.

As of today these questions remain unanswered. George Carey has indicated that he does not intend to comment publicly about the Ball case, although he has been happy to speak publicly about the case of another Chichester Bishop, George Bell, who he believes has been wrongly accused of child abuse. But the truth matters a great deal: with the 1993 caution, Ball effectively escaped justice for 22 years. One of his victims, Neil Todd, no doubt bitterly frustrated by the failure of the authorities to accord his allegations the seriousness they deserved, later took his own life. And Ball's other victims were left to nurse their pain, not knowing that many others shared their trauma.

So we need answers to these questions, and if George Carey won't answer them willingly then the Goddard inquiry must compel him and other church officials to do so on oath. Indeed if information indicating that Ball was a serial abuser was indeed supressed, this begs the question of whether church officials might be guilty of criminal offences – for example misconduct in public office. That will need to be considered. In the meantime, although George Carey is no longer Archbishop of Canterbury, he remains a senior figure in the Church of England. His successor, Justin Welby, claims that the church now puts victims first. Whether the church is willing to be honest about the Ball case is a good test of the truth of that claim.

Richard Scorer is a specialist abuse lawyer at Slater and Gordon Lawyers (UK). The views expressed in our blogs are those of the author and may not represent the views of the NSS.