Furore over Islamic bus adverts is nothing but disingenuous propaganda 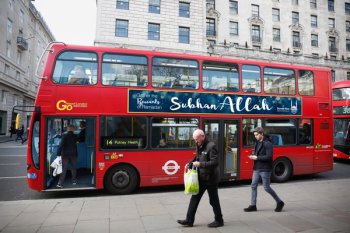 Christian groups are being disingenuous and divisive in claiming unfavourable treatment over the decision to allow Allah adverts on buses, argues Stephen Evans.

Christian groups have reacted with faux dismay to news that buses around England will soon be displaying 'praise Allah' adverts during Ramadan, paid for by the Islamic Relief charity.

A number of Christian campaigners have accused the advertising industry of being biased against Christianity and questioned why a Muslim group has been allowed to carry religious messages on buses whilst a Lord's Prayer advert was refused from cinemas.

The answer, as they know full well, is because they are comparing apples with pears.

Digital Cinema Media (DCM), the agency which handles British film advertising for the major cinema chains, turned down the Church of England's payer advert last year because it fell foul of its reasonable and perfectly lawful policy of not accepting "political or religious advertising". A similar advert from Islamic Relief would have met with exactly the same response.

Meanwhile, transport bodies such as Transport for London tend not to have rules against ads about religion – and in the past both humanists and Christians have used buses to evangelise their worldview. In 2008 the 'Atheist Bus Campaign' declared: "There's probably no god. Now stop worrying and enjoy your life." The Christian Party, the Russian Orthodox Church and Trinitarian Bible Society all countered by plastering their own truth claims about the existence of God across London's buses. All would be equally disallowed under DCM's policy.

One exceptional circumstance where a religious message was banned was when the then-Mayor of London Boris Johnson stepped in to ban averts from a Christian charity promoting so called 'gay cure' therapy.

The Core Issues Trust – the 'ex-gay' charity behind the ad, claimed its 'free speech' was being denied and challenged the decision in court. It lost, and rightly so. The High court ruled that the decision to refuse to display the ads was "justified and proportionate" to protect the rights and dignity of gay people.

In responding to this latest manufactured Christian marginalisation story, Andrea Williams, the director of Christian Concern, told the Daily Mail: "Britain is a Christian country and we Christians need to find our voice. If we are allowing these adverts for Islam, then we need to give the Christians far more freedom to express themselves."

This intentionally fails to recognise that Christians have just as much freedom to express themselves as any other group – arguably far more considering the significant privileges still afforded to Christians in the UK.

Similarly the Christian Institute said it hoped the Islamic campaign would bring about "a new era of greater expressions of the Christian faith, which seems to have become persona non grata".

Christianity may not be particularly thriving in Britain, but it's wholly misleading to complain that Christians are somehow treated unfavourably, or that Christianity is somehow Islam's poor relation when it comes to religious freedom.

Exploiting Islamic Relief's bus adverts to promote a bogus Christian marginalisation narrative (intended to garner sympathy for additional religious privileges such as the right for Christians to refuse services to gay people) is as divisive as it is wrongheaded.

In Britain religious people have the right to express their beliefs publicly, as do those who oppose or question those beliefs. Some commercial organisations, such as cinemas, may reasonably opt not to show religious advertising in order to create welcoming and fully inclusive spaces, but generally speaking religion is free to compete and flourish (or flounder) in the public marketplace of ideas.

Freedom of expression faces significant challenges in the UK but the inability to sometimes secure advertising space simply isn't one of them. Christians aren't being marginalised, they're being treated the same as everybody else – and perhaps that's what really bothers the Christian lobby groups.