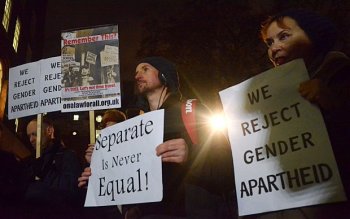 The LSE and their Students' Union need to stop breaking equality legislation that is designed to protect students, and start listening to the Muslim women challenging gender segregation, argues Chris Moos.

Students and staff at the London School of Economics (LSE) are accustomed to being in the limelight. Whether it is taking money from North-African dictators, promoting anti-Muslim and homophobic charities or harassing atheist students for their 'blasphemous' t-shirts – LSE is often at the centre of controversy.

Now, another facet has been added to the picture. The London School of Economics Students' Union Islamic Society recently held a gender segregated dinner.

The legal situation is clear. In their guidance on 'Gender segregation at Events and Meetings: guidance for Universities and Students' Unions', the Equality and Human Rights Commission (EHRC) states that:

Gender segregation is not permitted in any academic meetings or at events, lectures or meetings provided for students, or at events attended by members of the public or employees of the university or the students' union (EHRC, 2014: 2).

And yet, an alliance of university administrators, Students' Unions representatives in the person of the LSESU General Secretary Nona Buckley-Irvine, and Islamist apologists have been defending, condoning and justifying the gender segregation, or their lack of action against it. As I will show, their arguments are in direct contravention to the guidance of the EHRC and the existing equality legislation.

1. "This was a private event outside the university premises – hence equality legislation does not apply"

The first claim is that the event was organised by the Students' Union outside of LSE premises. Hence, a "private" event would not be covered by equality legislation.

An employer cannot evade responsibility for events held outside its premises, for example in the case of sexual harassment at office parties. In the same vein, simply moving an event down the road to the next best facility to circumvent equality legislation does not lead to the creation of a space devoid of equality law. Universities have a duty of care for students, whether or not the events organised through the university or students' union take place on the premises of the university.

This is confirmed by the EHRC, which states that:

"Equality law applies to meetings or events on the premises of the university, or in premises used by the students' union (including outside the university's premises)" (EHRC, 2014: 4)."

2. "The event was an act of worship – hence equality legislation does not apply"

Acts of worship are excluded from equality legislation. Exemptions apply, and gender segregation is permissible in communal accommodations, toilets or changing facilities, or for the purpose of sport or welfare provision. However, as the evidence shows, the event was a dinner featuring guest speakers, including non-Muslim guests in the form the General Secretary of the Students' Union – not an act of worship.

Knowing this, some have now started to claim the event did include a prayer, and therefore as a whole would fall under the exemption from the equality law. The inclusion of a prayer does however not make a social event an act of worship.

The EHRC has accounted for that possibility, and states that:

"Where religious worship is followed by a guest speaker, or a meeting to which others are invited, it is recommended that information is requested [by the university] about the purpose of the meeting and about the seating arrangements (as segregation is not permissible unless an exception [see above] applies)(EHRC, 2014: 9)."

As the advertised purpose of the event was not worship, but dinner, even if it may have included a prayer, the segregation was thus not permissible.

3. "The gender segregation was voluntary – hence equality legislation does not apply"

Genuinely voluntary segregation is legal, in the same sense as people choosing freely where to sit in a public space is legal. Some have however claimed that the segregation at the event was "entirely voluntary", or that there was "no evidence" that attendees were forced to comply with segregation. This is untrue, as students have been reported to have found the segregation "intimidating".

Whether or not this is accurate, the related claim is that those critical of the segregation would need to prove that attendees were involuntarily segregated, and that those uncomfortable with segregation would have needed to air their disapproval for it to become involuntary. This places the burden of proof on the victim of segregation, not the organiser or facilitator.

Importantly, this claim also ignores that gender segregation is taking place in a religious setting where challenging alleged religious rules is depicted as "un-islamic" in order to portray non-compliant women or men as deviant or traitors to their community. Given the hypersexualised environment of some Islamic groupings, Muslim women who challenge gender segregation are viciously abused by Islamists, while men are smeared as getting gratification out of sitting next to Muslim women.

Thus, the burden of proof that gender segregation is entirely voluntary lies with the organiser and the university, not the victim, as the EHRC explicitly states:

"In order to protect themselves from liability in relation to a claim for discrimination, universities and students' unions would need to satisfy themselves thoroughly that any gender segregation was wholly and demonstrably voluntary, both at the booking stage and during the event, and should be mindful of the impracticability of attaining in this regard a level of certainty which would be likely to satisfy a court (EHRC, 2014: 5)."

"To be voluntary, all attendees would need to be at liberty freely to choose where they wished to sit without any direction, whether explicit or merely an implicit expectation (EHRC, 2014: 6)."

Separate tickets and phone numbers for contacting the organisers for "brothers" and "sisters", and a seven foot screen to segregate genders clearly demonstrate that at the very least there was some degree of direction and expectation as to the seating arrangements.

The EHRC considers this a clear case of violation of the equality laws, as:

"Segregation is not voluntary where any one individual feels that their choice is constrained due to a pressure to conform to separate seating arrangements of any form in the venue, regardless of whether they have been explicitly directed or instructed as to where they can sit (EHRC, 2014: 6)."

As neither the Students' Union nor LSE can prove that the gender segregation was entirely voluntary, without direction, instruction or expectation, this constitutes a clear violation of equality legislation.

4. "LSE did not know that the LSESU Islamic Society was gender segregating their events, so did not have the duty to prevent it from happening"

As the press statements show, LSE is trying to suggest that it had no knowledge about the gender segregation, or could not have known that gender segregation has been a regular feature of LSE events in the past.

When I was a student at LSE, I have myself reported a total of nine occasions that I had come across where the LSESU Islamic Society organised gender segregated social events, similar to the dinner of last week. In several emails to LSE Pro-Director Paul Kelly and Director Craig Calhoun between December 2014 and February 2015, I pointed out that the LSE was in clear violation of equality legislation. My concerns were dismissed, and no precautions were taken to ensure that gender segregation did not reoccur.

Yet, the guidance of the EHRC states that: "If the university only learnt of the compulsory gender segregation after the event, then it would need to take steps to ensure that it did not re-occur in the future, in order to avoid infringement of the [Equality] Act (EHRC, 2014:10)."

The fact that LSE Students' Union has condoned the discriminatory nature of this event, and that the LSE has been fully aware that gender segregation has been regularly occurring at their events aggravates this matter. Both the Students' Union and the University have not only shown disregard for the rights and welfare of their students, but also for the Equality Act 2010.

It thus does not take a lot of legal expertise to see LSE is in clear breach of equality legislation.

As I have argued before, this is not a surprise. Universities around the country are breaking the law, sacrificing gender equality in order to appease the demands of increasingly extreme and sexist religious student groups. Will it take homosexuals or the non-religious to disappear behind seven foot separation walls for universities to understand that as much as racial equality, gender equality is a basic human right?

Tehmina Kazi, Director of British Muslims for a Secular Democracy and LSE alumni, is worried about this development:

"I am saddened and appalled that our successors at the LSE seem to have prioritised cultural relativism above equality and human rights. Whether they realise it or not, they are doing a tremendous disservice to dissenters within minority religious communities.

"We must be very clear: when it comes to university events that fall outside the (narrow) Equality Act exemptions, separate is never equal."

When will the LSE and their Students' Union stop breaking equality legislation designed to protect students, and start listening to women like Tehmina?

Chris Moos (@ChrisMoos_) is a secularist activist. He has successfully campaigned for the right to free expression and against gender segregation at universities, as well as the accommodation of religious codes in the British legal system.

The views expressed in our blogs are those of the author and may not represent the views of the NSS.

This blog was originally posted by The Freethinker, and is republished here by permission of the author.

Chris Moos is a secular activist and member of the NSS Council. Follow him on Twitter @ChrisMoos_. The views expressed in our blogs are those of the author and may not necessarily represent the views of the NSS.