Classrooms should be free from an overbearing religious ethos 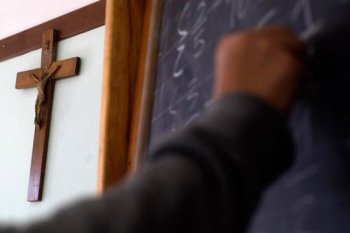 With the Church seeking to extend its influence over the management of schools, Stephen Evans argues that religious groups' demands shouldn't outweigh parental rights and children's independent interests.

In 2013 the former chair of the Church of England's Board of Education told the General Synod "We don't need to attract [children, young people and parents] to church they're already there, if we embrace our church schools fully."

Three years on and, according to official Church of England figures, weekly Church attendance has slipped below one million for the first time. Meanwhile, over a million children are attending publicly-funded church-run schools and academies. That means there are more children attending compulsory worship in schools every day than there are Anglicans worshipping in churches each week.

With the former Archbishop of Canterbury Lord Carey warning that the Church "will be extinct in one generation", it's little wonder that the CofE regards schools as "absolutely core" to its mission.

Despite all of its talk of 'inclusivity' the Church appears increasingly keen to turn the schools it runs into places of worship. But it fails to understand that there's more to inclusivity than not having a discriminatory admissions policy.

In addition to Ofsted inspections, 'church schools' are inspected by their local dioceses to ensure that they are "distinctively and recognisably Christian institutions". Pressure to receive a favourable diocesan inspection may well explain why we're now seeing some CofE schools increasing their religiosity by worshipping at the beginning and end of each day and before and after lunch; introducing prayer corners in classrooms complete with "a small cross, candle, school prayer, prayer box, children's bible, prayer book and copy of the Lord's prayer"; having regular visits from priests, and even employing them as 'school chaplains'.

Despite academisation being sold to us as something that would enable greater 'autonomy' for head teachers and schools, multi-academy chains are now the bodies controlling what goes on in academies – and Church-controlled MATs are wasting no time in ensuring governors and staff promote a 'robust Christian ethos'.

Senior staff in church schools are usually practising Christians (a job requirement for many headteachers) and many parents feel uncomfortable raising concerns about the way in which religion is being promoted in their child's school, fearing their perfectly reasonable secular stance will be regarded as 'anti-religious' by the committed Christians running the school – and indeed they are often given a frosty and defensive response.

But of course, many teachers will simply be carrying out the orders and policies from on high to "share the truths of the Christian foundation" and "lead the children into an awareness of God in their daily lives."

Academisation further disempowers parents. When these issues aren't satisfactorily addressed in school parents can no longer turn to local education authorities but must instead appeal to those running the Diocesan Multi Academy Trusts. Good luck with that.

Traditionally, acts of worship have been part of school assemblies, but some 'church schools' are now moving it into the much more intimate setting of the classroom. Concerns about 'classroom worship' have recently been raised with the NSS by school governors, teachers, parents and pupils alike. Brent Laytham, a professor of theology who literally wrote the book on 'classroom worship' calls it "a practice of great pedagogical power and curricular import".

But where do parental and child rights come in all of this?

Of course, the argument goes that if someone chooses to send their child to a CofE school, they have to accept all the "churchy things" that go with it.

But why should they? Church schools are rarely, if ever, homogenous religious communities and there's no good reason why the Church should be given free rein to treat them as if they are. Besides, children shouldn't be regarded as having settled religious identities and convictions. Schools should be giving them the tools and freedom to make their own reflective choices in their own time, not manipulating them into becoming young Anglican sympathisers.

Research shows that most parents choose schools based on their locality and academic standards – very few choose faith schools for the "churchy things". Parents are simply having to put up with the religion bit.

The parental right of withdrawal offers no real solution. Despite little enthusiasm for religion, few parents – and for obvious reasons - choose to voluntarily exclude their child from any part of the school day. The practical difficulties in exercising the right of withdrawal become insurmountable when worship encroaches into the classroom and religion 'permeates the whole school experience'.

The way in which school worship impinges on the rights of others is implicitly acknowledged by the presence of special Equality Act exemption that means acts of worship by schools are not covered by the provisions prohibiting religious discrimination.

There's an obvious tension in robustly asserting a Christian ethos on a religiously diverse and largely religiously indifferent school community. Doing so is disrespectful to both pupils and parents.

It's clearly incongruous that in modern secular Britain so much of our education system is under religious control. In the ongoing debate over the place of religion in schools, let's make sure parental rights and children's independent interests are not eclipsed by the wishes of organised religion.

Stephen Evans is the campaigns manager of the National Secular Society.The views expressed in our blogs are those of the author and may not represent the views of the NSS. Follow him on Twitter: @Stephenmevans1