Spotlight: This hard-hitting film salutes the journalists who exposed the power of a deeply corrupt institution 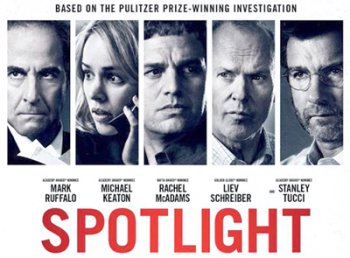 Keith Porteous Wood previews Spotlight, the hard-hitting film which depicts the Boston Globe's investigation into the cover-up of child sex abuse by the Catholic Church.

Spotlight, a film released this Friday (29 January), follows the Boston Globe's dogged investigative and Pulitzer Prize-winning reporting in the early 2000s of one case of clerical child abuse in the US's largest Catholic archdiocese. It led to exposure of abuse on a massive scale being covered up by the Church, justice officials and the whole of Boston's very Catholic establishment.

The story might never have been told if the new editor of the Globe hadn't been Jewish rather than Catholic – as his predecessors had been. He also originated from Miami, where the Church holds much less sway over the judiciary. Another factor in the success of the investigation was the newspaper being prepared, despite the Globe's predominantly Catholic readership, to sink ever more resources into the investigation, uncovering ever more abusing clerics being sheltered by the Archdiocese – ultimately there were just short of 250 such cases.

The previously deferential Boston populace turned on Archbishop Bernard Law, demanding his resignation. A picket formed outside his palace, with placards reading "Toot if you want him to go!" The cacophony from passing motorists was notable. Protestors even thronged the cathedral. Pope John Paul II made an ill-judged and ultimately fruitless intervention to discourage Law's resignation.

After scores of priests signed a letter calling for him to go, the release of numerous court files filled with excruciatingly embarrassing details, and him being served with a subpoena, Law fled secretly like a fugitive to the Vatican, where he has since been sheltered from the legal consequences of his actions. The Vatican has, of course, has provided safe haven for many criminals in its time.

The impact of the investigation is difficult to overstate. It led to a change of climate resulting in the Church paying several billions of dollars and Euros in compensation to victims and to the examination by the United Nations of the Church's role in worldwide clerical abuse, an investigation in which the NSS took part.

The film's exploration of the events in Boston is all the more enthralling because it is a true story, and a fitting tribute to the determination and unglamorous footslogging of the journalists involved. Sadly, because of plummeting newspaper circulation, investigative journalism of this kind is becoming rarer. Even the most prestigious papers simply don't have the resources to mount such an enquiry these days. So we should celebrate the Boston Globe's Spotlight team for defying the pervasive power of a deeply corrupt institution.