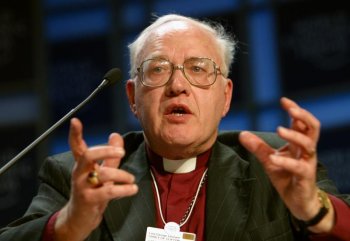 With the release of some of the letters written in support of Bishop Ball during the 1992-1993 police investigation, particularly those written by prominent people, we're starting to see more clearly how Ball was protected, writes legal specialist on child abuse Richard Scorer.

The spotlight has rightly fallen on former Archbishop Carey, who seems reluctant to discuss the subject. In response to further revelations in The Times, a spokesman for Carey said that he was "abroad" and "unlikely to be able to comment". But the questions mount, and we need to hear from him.

Before itemising those questions, just to recap what we now know: firstly,
that on 5 February 1993, Carey wrote to the Chief Constable of Gloucestershire regarding the allegations against Ball. In this letter Carey described the allegations against Ball as "most improbable" and asserted that "if he is guilty of unprofessional behaviour it is quite unrepresentative of his style". Whilst noting that "special pleading" on Ball's behalf would be "entirely inappropriate", Carey went on to explain to the Chief Constable that he felt "justified in drawing to your attention the excruciating pain and torment " which these allegations have inevitably brought upon Ball, whom Carey described as a "wonderful and honourable man" (if this isn't "special pleading", I'm not sure what is). We also know that in March 1993 Carey wrote to the DPP, Barbara Mills, pressing her to make a decision quickly given Ball's "fragile health" (interesting, isn't it, when "fragile health" is deployed by child abusers facing charges: as it turned out, Ball was well enough to face trial in 2015, some 22 years later).

Secondly, we now know that in January 1993, i.e. the month before Carey wrote this letter, he had been in receipt of a report about Ball's conduct from his chief of staff, the Right Rev Ronald Gordon. We don't have a full copy of this report; all we have is a heavily redacted version disclosed (pursuant to a data protection request) to a man who had written to Carey in December 1992 to express his concerns about Ball's behaviour some 10 years previously. This man, who wishes to remain anonymous (I'll call him AB), has kindly passed this redacted version to me.

Despite the redactions, it's clear that this report followed a long meeting between Gordon and Ball in January 1993 (Gordon's report helpfully records that the meeting lasted from 11.30am to 2:10pm "with a short break for sandwiches"). During the meeting Gordon and Ball discussed "correspondence the Archbishop had received referring to past events in Ball's life". Gordon's report records that he felt no need to ask for more detail of what happened between AB and Ball as "there is already enough evidence to suggest a picture of what has been happening". The clear implication of the unredacted parts of the report is that a number of pieces of evidence about Ball's behaviour had come to the church's attention – enough in fact to "suggest a clear picture of what has been happening", namely, the widespread and systematic abuse of young men.

And yet only a few days later Carey wrote to the Chief Constable claiming that the allegation which the police were investigating (i.e. from Neil Todd) was "improbable" and "quite unrepresentative" of Ball's behaviour.

Further, in September 2015 Carey stated that: "I have seen a number of reports which appear to give the misleading impression that I interfered with the process of justice by contacting the Crown Prosecution Service. I only did so after Ball had been cautioned".

We now know, from the recent release of the letters, that this is plainly not correct: Ball wrote to the Chief Constable on 5 February 1993; he wrote to the CPS on 2 March 1993; and it was only after those letters that the prosecution of Ball was abandoned and a caution administered.

As I told The Times, unless Carey has a very good explanation, this has all the hallmarks of a cover-up. So two things now need to happen: the Gordon report now needs to be released in full, and Carey needs to answer the following questions:

- Why did you tell the Chief Constable in February 1993 that the allegation against Ball being investigated by the police was "improbable" and "unrepresentative" when you appear to have had an internal report suggesting otherwise?

- Why didn't you share the additional information in that report with the police, so they could follow up further lines of enquiry?

- Why did you procure for Ball a guarantee of no further prosecution, despite knowing of other allegations against him? (Maybe this question answers itself...).

-Why did you allow Ball to continue to officiate at services after being cautioned, despite having a "picture of what has been happening"?

- Why did you claim last year that you only wrote to the authorities after the caution, when this wasn't the case?

These questions matter a great deal. With the 1993 caution deal, Ball escaped justice for 22 years. One of his victims, Neil Todd, no doubt bitterly frustrated by the failure of the authorities to accord his allegations the seriousness they deserved, committed suicide. And Ball's other victims were left to nurse their pain, not knowing that many others shared their wounds. Although Carey is no longer Archbishop of Canterbury, he remains a senior figure in the Church of England: so if anyone is going to take seriously Archbishop Welby's claim that the church now puts victims first, Carey needs to give a full explanation of his actions. Those who have suffered so grievously from Ball's behaviour deserve nothing less.

Richard Scorer is Head of the Abuse Team at Slater and Gordon lawyers. The views expressed in our blogs are those of the author and may not represent the views of the NSS.