2015: A year of terror for Bangladesh’s secularist writers 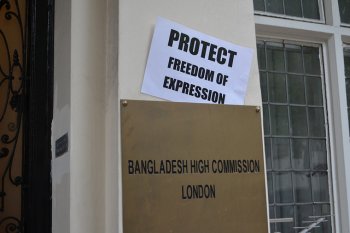 Arif Rahman, a Bangladeshi blogger, reflects on the targeted attacks on secularist bloggers that took place in Bangladesh throughout 2015, claiming many lives, and considers the road ahead for secularism in the face of terror and state-sanctioned persecution.

2015 was the darkest of times in Bangladesh's history. Like the 1975 murder of the founding president Sheikh Mujib, which wiped out all the secular achievements of the 1971 war for independence from Pakistan, 2015 will be remembered by the world as the year atheist bloggers, authors and publishers were killed.

Bloggers and publishers were assassinated one after another, attacked in the streets, at home or in their offices, and countless bloggers were persecuted by the infamous 'Section 57', a blasphemy law. This resulted in mass hysteria among the huge number of bloggers, activists, a lot of whom eventually fled the country, tarnishing the 'secular image' of Bangladesh.

In this one year, 2015, Bangladesh became a killing ground of not only bloggers, but for freedom of speech itself. Government officials, ministers and police repeatedly warned bloggers not to 'cross the line' immediately after every brutal murder by Islamists. Large sections of the country's traditional media chimed in with this sort of victim blaming.

The result was devastating for the psychological state of bloggers, writers, publishers and vocal activists in general. The fear of sudden attack coupled with the threat of jail or persecution at the hands of the law, supported by a vicious media, created such a toxic psychological atmosphere for the already afraid critical and creative minds that people were fleeing the country in flocks. This suffocating atmosphere created perfect conditions for ISIS to expand. Their magazine 'Dabiq' declared Bangladesh its next target.

Bloggers running for their lives could not go to the police, and were told that the authorities couldn't give them protection, and that their best bet was to flee the country. The son of Sheikh Hasina, Sajib Wazed Joy, an adviser of the Prime Minister, told Reuters that the Awami League, the party running the country right now cannot aggravate Islamists in fear of losing votes. His mother expressed her condolence to the father of the slain science writer Avijit Roy in secret, over the phone. She was afraid if news of this phone call leaked to the press, her 'approval rating' would diminish. It seems to that Islamists are already in power.

We know very well that the Islamists are funded and supported from abroad, not least in donations and assistance from Saudi Arabia, the 'ally' Britain desperately appeases. Bangladesh does not want to be seen as aggravating either Saudi Arabia, or Britain. But Bangladeshi secularists will not forget that Britain and Bangladesh both flew their national flag at half-mast after the death of the Saudi King. Secular bloggers, authors and activists may only be a thorn in side for Islamists, but we are a very painful one.

Aside from the horrendous levels of violence, the law, in the form of Section 57 of the Information Communication Act, was also weaponized against secularists back in 2013. This gave yet more fuel for the Bangladeshi intellectual diaspora. In this vague and blunt law, God, prophets, and political personalities are protected from criticism or satire.

The law puts fear into the minds of bloggers: writers can be arrested without warrant, detained indefinitely, fined an unbelievable sum or worse, and face a jail sentence of 14 years. That fear is enough for the rest of the critical blogger community to fold inwards, hide and eventually give up writing altogether. The effect is a victory for Islamism and the would-be dictator, Sheikh Hasina.

A translation of Ali Dashti's "23 Years, a Study of the Prophetic Career of Muhammad" was seized by Islamist thugs. No one even dared to protest. Recently the same Islamist mob vandalized the traditional Baul festival, just because the Bauls, the mystical singers of rural Bangladesh, do not conform to imported Wahhabism. No one dared to stop the Islamist mob. That is the price Bangladesh is paying for criminalising atheist blogging. Attacks on other religious sects continue year-long. No newspaper dares to publish a humanist or atheist article in fear of retaliation. The publishing of cartoons has already become a taboo after Islamists threatened to burn down a major daily newspaper. The Bangladesh DGFI 'ordered' businesses not to advertise in the same newspaper, exerting another level of government control.

2015 also saw the proliferation of 'hit lists' and further threats to newspapers, dictating conditions such as women journalists to be sacked, no reporting on the killing of atheist bloggers, no negative coverage of Islamist thugs. We know Islamists are operating widely, but in Bangladesh, they get a seal of approval from the government.

Bangladesh is known as a 'secular' state to the rest of world, however, the meaning of secularism inside the country is skewed to the degree that UN Special Rapporteur on Freedom of Religion or Belief, Heiner Bielefeldt, recently had to comment on the 'misperceptions' around secularism within Bangladesh.

This struggle between real secularism and overt Islamism took a turn for the worse in 2015 with the blood of so many bloggers being spilled on the streets.

The Islamist bubble seems to have engulfed the secular narrative practised by a dwindling number of civil society organisations. The 1991 transition from military rule to democracy gave us hope but even after 24 years in 'democracy' we seem to have failed to fulfil the basic requirements of a proper democracy. This is sad and no signs of recovery can be seen in the horizon.

This is an amended version of a blog post originally posted here. Arif Rahman is a secularist Bangladeshi blogger, based in the UK. The views expressed in our blogs are those of the author, and may not represent the views of the NSS.