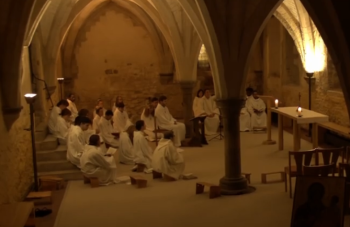 With a considerable media firestorm the Church launched a crafty piece of marketing for their 'Just Pray' campaign – centred on the accusation that their Lord's Prayer advert had been "banned" because it was "offensive". One week on, new facts raise significant questions about their claims.

The National Secular Society was initially something of a lone voice when we criticised the Church's claims that it had been discriminated against by several cinema chains' decision not to screen the Lord's Prayer advert, and the Church's complaint that its freedom of expression had been denied because people were unreasonably "offended" by the advert. We've since been joined by many others in expressing scepticism for a variety of reasons, including some Anglicans disappointed with the Church's behaviour, and others less willing to accept the Church's spin without question.

On BBC Sunday Morning Live on 22 November – just after the media embargo had released the story and the furore began – the Bishop of Chelmsford was asked if he understood why DCM had declined to show the advert and said "not really". He said that the company had encouraged the Church and even offered a discount (true), but then added that "for some reason best known to themselves they suddenly changed their mind in the last couple of weeks".

"The last couple of weeks" is the key phrase. In fact, over three months before the Bishop's "last couple of weeks", on the 3 August, David Woolford of DCM emailed Reverend Arun Arora – the Church's Director of Communications – and said "Mate, I'm afraid I've got some bad news, it looks like we're going to be unable to carry your ad in our cinemas." The casual language used perhaps points to the fact that Woolford, an Agency Assistant, was a relatively junior member of staff and not able to make the deal on entirely on his own. He refers to negotiating the terms of the proposed deal with his own boss.

He continues: "We initially thought it would be fine as long as the BBFC and CAA approved the copy (which would be more than likely). However, after our exhibition team spoke to our exhibitors themselves, Vue, Odeon and Cineworld have told us that they can't carry any ads of a religious nature. It's similar to the rules about political advertising- basically the exhibitors can't be seen to have any manifesto or motive of their own, be it political or religious."

Extensive emails have been published by the Anglican blog Archbishop Cranmer – who says our response is "typically cynical" – but the Church's presentation of events seem to raise more questions with every day that passes.

When the story broke the Church said it was "bewildered" and baffled by the decision almost as if they had just heard about it. On 21 November – the day before the embargo on the story expired, Reverend Arora tweeted "Going to be an exciting day tomorrow #justpray". This is because the launch of the 'Just Pray' website was due on 22 November, the day the Church chose to make public its claims about the prayer advert being 'banned'. The BBC initially reported the story as a "ban", but acknowledging that the decision was not in fact a "ban" the wording in their headline was subsequently changed to "snub". The Church later even raised the prospect of legal action against DCM under the Equality Act (legislation from which there are religious exemptions).

Perhaps overstating his reaction, the Mail on Sunday reported that Archbishop of Canterbury Justin Welby "reacted with fury" to the 'ban' – despite the Church knowing many months in advance what the situation with the advert was, but adding to the impression in the media that the 'ban' was a shocking and recent development.

The Church clearly had a legitimate grievance if it had produced an advert, and was then told in the "last couple of weeks" that cinemas would not air it. The NSS said as much on BBC One's Sunday Morning Live and in subsequent radio interviews.

But it then came to light that one scene from the advert – the wedding – had not taken place until October. On the 'Just Pray' website it says "Kameo and Enrico tied the knot in the beautiful St Stephen's Church, Lindley, Huddersfield in October". We also noticed that the opening sequence of Justin Welby had been shot in a garden with autumnal leaves. Perhaps also significant is that the film obviously includes the website URL, but this was not registered until 19 October.

So the Church was told initially on 3 August that cinemas would not screen the advert. The Church was then told definitively on 16 September by Paul Maloney, DCM's Finance and Operations Director (presumably a far more senior member of staff than the Church's initial email contact) that "we will be unable to take forward the proposed Church of England advertising campaign." Despite this, in October, the Church was still filming at least one scene for the advert (the wedding), registering the website URL and possibly even shooting the opening scene in the full knowledge that the advert would not be screened in cinemas – they clearly had other plans for it.

Archbishop Cranmer complains, "Digital Cinema Media have every right to decline an advertisement which fails to comply with their company policies, but it is not unreasonable to assume: i) that conditions would be pre-disclosed; and ii) that DCM employees would be familiar with those conditions and make them clear to their prospective clients." But if the advert was still being filmed in October (whether or not any of it had even been filmed before then) and if the Church still needed to "make some final decisions about the ad in terms of funding" as of 14 September (per an email from Reverend Arora) and if they had been told in August of the policy via email, surely the conditions were therefore "pre-disclosed"?

We have no objection to or interest in religious groups producing adverts, nor have we ever suggested the film is offensive; but we do have a strong objection to contrived controversy being used to manufacture a false narrative that Christians are being persecuted.

We energetically defend freedom of expression, including for street preachers making statements we find distasteful. But that this has been presented as a restriction of the Church's freedom of speech is so preposterous it is almost comical. It has complete freedom to say or publish whatever it wishes within the law and probably more media outlets willing to broadcast its messages uncritically than practically any other body.

The supposedly victimised Church even used its privileged membership of the House of Lords to elicit sympathy from the Government. It was also mentioned on Thought for the Day on 1 December, an uncontended opinion slot to which we have no equivalent right of reply.

The Church should almost be congratulated on engineering such massive coverage of its campaign and promotion of its prayer site through its implication of Christian victimhood. The Mail on Sunday predictably and dutifully toed the Church's line, reporting on 29 November: "Britain's biggest cinema chains are facing an investigation by the Government's discrimination watchdog for banning the Church of England's Lord's Prayer film."

The EHRC waded into the controversy – seemingly taking the Church's side but perhaps without having thought of the wider ramifications – by asserting it was "concerned by any blanket ban on adverts by all religious groups". The UK Human Rights Blog has since published an opinion dismissing claims about discrimination, noting that "a challenge to DCM's decision is likely to be unsuccessful. DCM, by refusing to air adverts they reasonably regard as 'Political or Religious Advertising' would be treating all religious organisations the same way and therefore not discriminating on the basis of religion or belief." In other words there would be no discrimination. It argues that the Church has no "right to buy" commercial advertising space in cinemas and have the adverts accepted.

Should cinemas really be forced (provided they do not discriminate) to screen adverts on religious attitudes to homosexuality or abortion or a five minute film on the Trinity? Cinemas have every right to make commercial decisions for themselves and the Church's threats to compel companies to show adverts they don't want to show are the only aspect of this saga with implications for free speech.

The story was framed in the media as though the Church had produced the advert and only found out in the last "couple of weeks" that it could not go ahead – gaining the sympathy even of the 'cynical' National Secular Society. However the emails released from over the summer show clearly that the Church had advance notice, and even knew before they completed the film.

It now appears as though the Church waited patiently for months before telling anyone about the advert decision until the video, website and media campaign were ready for launch and then executed a carefully constructed press campaign – with the support of a sympathetic media who delivered the advert to a far larger audience and created much greater public interest than would otherwise have been the case (and did it all for free).

They even managed to draw the PM into the debacle, a masterstroke. He described the so-called "ban" as "ridiculous", although he didn't deal with the substance of the issue.

It seems highly likely that this charade will have been counter-productive. That even the supposedly cuddly CofE is willing to reach for its lawyers over this will have led responsible advertising executives the length of the country to conclude that the best way of avoiding discrimination claims is not to accept any religious advertising for fear of litigation from others, including those with a less palatable message but with very long pockets.