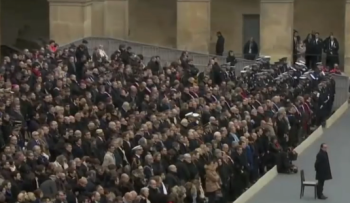 France's recent ceremony for those killed in the Paris attacks was a moving demonstration that religiously neutral ceremonies are a powerful way to unite people regardless of faith or politics; it is something the UK could emulate for our own public ceremonies, writes Keith Porteous Wood.

No one could fail to be moved by the ceremony to honour the 130 people who lost their lives in Paris's second Islamist atrocity this year.

The ceremony was also notable for its dignity; President Hollande united the whole grieving country and allies abroad, regardless of politics or religion: indeed this was at the heart of its haunting success. Everyone was included and equally engaged. And that included Muslims, some also mourning relatives and friends.

Nowhere did I see any criticism of the ceremony, yet it was one that could never have occurred in the UK. Only the Independent drew attention to the ceremony, in line with France's secular constitution, having no religious involvement. It was none the worse for that, and I maintain it was so much better because this enabled complete inclusivity. That there was no formal religious element did not prevent anyone who wished to from expressing their own religious thoughts privately.

Predictably, both the BBC and Sky – and the Daily Mirror – referred to it solely as a "service", as if they could not conceive of such a ceremony without religious involvement. Or does their lexicon just have no suitable word? Or were they at pains not to draw attention to such an engaging ceremony being anything other than religious?

In marked contrast, The Guardian, ITV, Associated Press and the American CNN and FoxNews described it solely, and correctly, as a ceremony.

Less than 5% of those in England and Wales attend church on a normal Sunday, and even that small percentage is dropping rapidly as the churches are largely deserted by the young, while the proportion of those belonging to minority religions is rising significantly. It is well past time that we consider afresh how important civic occasions should be organised. The default, with such events being the prerogative of the Christian church, is no longer fit for purpose.

Those seeking to justify the continuation of such rites suggest they are benign and ask what harm is caused. Remembrance Day is the obvious example. The local ceremonies I have seen tend to have the older people praying, with the younger contingent mainly being those required to attend by virtue of their membership of, for example, the Scouts, Girlguides or Cadets.

We could do so much better and make it more inclusive if it were a secular ceremony. I have witnessed a remembrance ceremony in rural France, led by local civic dignitaries and with members of the emergency and armed services in attendance. It too was deeply moving.

And how many know that the cenotaph is a secular monument, with no religious insignia? It was so designed, far-sightedly and respectfully, to also honour the many non-Christians who gave their lives in WWI. The Church has tried since the Cenotaph's inauguration to take centre stage itself, but an attempt to relocate the ceremony to Westminster Abbey was, wisely, rebuffed.

Were such a monument to be built now, the Church would do all in its power to ensure it was Christian. Yet, despite our much greater religious diversity today, I am not confident that any Government now (particularly ones that continue to insist that "this is a Christian country"), would show the foresight and sensitivity exhibited by their forebears a century ago.

This is a plea for inclusivity over the domination of any particular religion. We may technically still have a "national church" but the French example illustrates how outmoded such an approach to public ceremonies is in these religiously diverse and dangerous times.

Having seen how well they work, let us have secular ceremonies too.