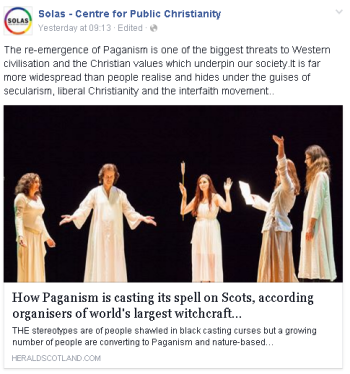 After the world suffered another grim reminder of the merciless Islamist ideology, the Solas Centre for Public Christianity warned instead that the re-emergence of Paganism in Scotland was one of the biggest threats to civilization.

On Sunday 15 November 2015 the news media carried extensive commentary to the effect that Islamism, as displayed by Isis in the series of vile attacks in Paris on the preceding Friday 13, represented one of the biggest current threats to western civilisation.

However, fundamentalist Christians in Scotland decided Islamism wasn't the only serious threat to our way of life confronting them that day. Apparently another of the biggest threats to western civilisation and "to Christian values which underpin our society" was revealed in a story run by the Sunday Herald. This concerned the re-emergence of Paganism in Scotland and the UK generally. At this point are you imagining druids or wiccans turning up at Edinburgh bars and concert halls clad in suicide vests and wielding AK47s, crying 'Oh Mighty Horned Lord' as they cut down helpless innocent civilians? You'd be quite wrong.

The story in the Sunday Herald that has provoked such fear in Christian minds and hearts related to the 'Witchfest' gathering the same weekend in Croydon and claims made by its organisers that renewed interest in Paganism is a trend sweeping Britain. The Children of Artemis, which runs Witchfest, claims that tens of thousands of people are once more practising Paganism, being attracted by its spiritual and magical elements which can include moon worship and ritual. It has noted 'an unprecedented interest' in its events with ticket sales up 150%, while its event on Wicca at Glastonbury Festival next summer is already sold out.

Merlyn Hern, of Children of Artemis, is quoted in the article as claiming that though people are rejecting traditional beliefs and religions (as the Census and countless other surveys demonstrate) they are still looking for a spiritual dimension in their lives and are more attracted to the egalitarian nature of Paganism, not to mention its desire for peaceful and tolerant co-existence in a secular country.

Clearly however as the Saturnalia approaches there is no room at the Christian inn for the assortment of Wiccans, Druids and other devotees of nature and witchcraft gathered peacefully last weekend in south London. The Dundee-based Solas Centre for Public Christianity reacted with some frankly bizarre and intolerant nonsense on its Facebook page to this reported Pagan resurgence, calling it "one of the biggest threats to western civilisation and the Christian values which underpin our society". The irony in this will not be lost on the well-informed who are aware of the history of Christianity, how it usurped Pagan rituals and festivals in the process of imposing its own imprint on society, and how for centuries it invoked Exodus 22:18 to put countless witches to death, including the ten women and one man now remembered at a special monument in Crook of Devon in Fife. As usual with the fundamentalist Christian outbursts we have come to expect from Solas, once more everything good about modern life in Britain was being claimed as of Christian origin while inconvenient history such as witch-burnings, the suppression of free thought through blasphemy acts, book-banning and the like was quietly left out of the story of how Britain's 'Christian values' were cultivated.

Solas went further in attributing blame for this revival of interest in alternative religions to its usual prime suspects - secularists - but it didn't stop with us. 'Liberal Christianity', as opposed presumably to the illiberal version Solas stands for, was also blamed. The 'interfaith movement', of which Pagans are often active and valued members, was also in the Solas firing line for trying to do its job in, well, promoting interfaith harmony. Clearly interfaith activity has its work cut out to achieve harmony and respect for all faiths.

A key figure in Solas is the Free Church of Scotland Moderator the Reverend David Robertson also of Dundee, about whose immoderation and confused mindset we have written before, here and here. It's worth noting that you won't find any of his most intemperate material on the Free Church web site, no doubt to maintain an outwardly apparent display there of pure Christian love, respect and tolerance, but the reality is quite different. Already bound to the Westminster Confession of Faith and a rabid intolerance of the Catholic Church and its 'Maryism', the Calvinist Free Church and its Moderator also campaign vigorously against the human rights of the LGBTi community and women. Robertson has also condemned the Church of Scotland for having 'atheists in its pews' and in a recent debate with a Kirk minister on the subject of atonement, told him that in another age he (Robertson) would have had to report the man as a heretic. I doubt that Robertson would wish to play the role of John Calvin in the trial of an alleged modern day Michael Servetus, but history shows Christianity has never been too kind to those reported for peddling perceived heresies.

How convenient for the Free Church of Scotland that its Moderator confines his most splenetic outpourings to his personal blog and the output of Solas. It's not clear if Robertson is responsible for the Paganophobia at Solas this weekend or whether he approves of it, but I am not holding my breath on that one.

I know some practising Pagans and have served on an Equality & Human Rights Commission committee with others, and have always found them to be tolerant and reasonable people without any trace of an evil master plan to crush all other faiths, and who are keen advocates of secularism. Casting these folk as currently one of the biggest threats to western civilisation displays a unique Christian fundamentalist paranoia as well as a hideous sectarian intolerance. To do so as the world got yet another rude awakening to the very real threat of the Islamists is just plain daft.