A timid defence of free speech is no match for Islamism. We must do better. 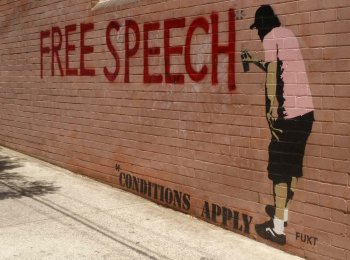 Society needs a much more vigorous defence of free speech than the one we are getting, with the 'elite' of society in academia, religion and politics offering a feeble and timorous defence, writes Benjamin Jones.

Speaking at a debate on "freedom of speech versus respect for religious belief" organised by The Tablet and St Mary's University, Dr Adrian Pabst of the University of Kent compared religious fundamentalism and "secular extremists", describing them in equivalent terms as comparable threats to free expression, phraseology he has used before.

On a panel at Westminster Cathedral alongside Jack Straw and the former UK ambassador to the Holy See, Francis Campbell, chaired by the BBC's Caroline Wyatt, Dr Pabst said that there was growing intolerance of free speech by religious fundamentalists and "secular extremists".

He was apparently oblivious to the vast amount of work that the National Secular Society does to defend preachers accused of hate speech or sending "offensive communications" by putting their sermons online, or that it speaks out for the rights of homophobic preachers who say hateful things but who don't incite violence, or that we are challenging the Government's approach to 'non-violent extremism' – a catch-all term likely to include all manner of people including many Christians – and ignorant of the fact that the NSS is again working with the Christian Institute to defend freedom of expression from the new 'extremism disruption orders'. Sadly most of the panel declined to address this point when I put it to them, and Dr Pabst seemed unmoved.

On the same day as the debate, the Director of the London School of Economics described the NSS as "extreme secularists". Our charter speaks for itself. Both of these academics have adopted a straw-man argument for transparent reasons, detached from reality – detached from the experience of the most influential secular state in the world – the United States – and built, it seems, only on cases of anti-clerical (non-secular) dictatorships.

The National Secular Society is not the League of the Militant Godless, and secularism does not seek to "eradicate" religion. The United States is the litmus test for this view; was religion eradicated by the adoption of the First Amendment, or does religion thrive in the US still, and in a manner unlike almost every other industrialised country?

Secularists will defend the free speech of Christians even when we object in the most fundamental way to what individual preachers have said – is it too much to ask for reciprocity on this fundamental question?

Sadly the panel was more-or-less in agreement throughout the 'debate'. There was little respite from Jack Straw, who said "you have to take account of the sensibility of people who have faith" in regard to the Charlie Hebdo and Danish Mohammed cartoons. He then suggested that it was "difficult" for a society that "doesn't know anything about religion" to understand. Ultimately he did come down modestly on the side of free expression, but his remarks were littered with ludicrous references to "aggressive humanists" and calls for "some restriction" on free speech to create a "stable and harmonious society".

While some Christians may not like secularism as a constitutional principle, humanism as a personal belief, or secularisation as a social phenomenon, it is absurd, inexcusable even in this global context, to be blasting "militant" or "aggressive" secularists or humanists. It is as over-the-top as describing a bishop in the House of Lords as a "militant Christian".

Straw made many reasonable points (some of which I strongly disagree with) about why you should be legally free to publish Mohammed cartoons but ought not to, and he said individuals have a right to be "outspoken", but this was all undone by his playing to the gallery on "aggressive humanists". I hope that in a more sober moment he would accept that the chances of a humanist gunman bursting through the door were vanishingly small.

Politicians sound ludicrous when they make these claims, framed in this hysterical language – western Christians have far bigger problems than the calmly proposed separation of religion and state, a protecting principle without which hundreds of thousands of their coreligionists in the Middle East have been deprived of life and liberty.

Though the panel broadly stayed on the side of defending free expression, though noting their personal objections to Christians being "ridiculed" and the 'renaming' of Christmas – which is a Christmas myth in its own right, society needs something much stronger than the tepid defence they offered.

Straw, a former Home Secretary, spoke of the need for a harmonious and cohesive society – aspirations which cannot be achieved by sacrificing liberty and freedom of thought, and –crucially – the freedom to articulate that thought.

Europe faces extraordinary problems integrating existing Muslim populations into society, much less integrating millions of new arrivals in Germany and elsewhere (a vast problem that the UK does not face in any comparable scale). Capitulating on our values, not inculcating an understanding that there is the freedom to satirise – and even to insult – is a recipe for disaster and complete cultural breakdown.

The demands will not end with a prohibition on depicting Mohammed. If we cave in on this (and we have now been debating this for almost thirty years) the other dominos will fall.

It was welcome that Caroline Wyatt, the BBC's religious affairs correspondent, was there to chair the debate and able to discuss the BBC's decision to change their policy of never depicting Mohammed – something the NSS called for after the January Paris attacks.

But the most troubling comment of all came before the debate started when the host quoted one Labour MP (unnamed), who said that in their largely Muslim constituency "blasphemy was the number one issue on the doorstep" during the election. If MPs do come under significant pressure for a blasphemy law in some form – as they clearly are – I fear that many will not have the fortitude to refuse.

Keith Vaz last week seemed to go much further than the Muslim Council of Britain when he said he had "no problem" with blasphemy laws being reintroduced and at Westminster Cathedral the great and the good of society seemed far more concerned with protecting people's feelings. The emphasis in their remarks was telling.

At a time when our values are (again) under direct attack from murderous gunmen, as I expect they will be for the rest of our lives, and senior politicians feel comfortable espousing the reintroduction of repressive laws, when MPs face pressure from their electorates to protect religious feelings above our individual freedoms, and as a generation of students graduate from 'safe space' universities – it is clear that a perfect storm is brewing.