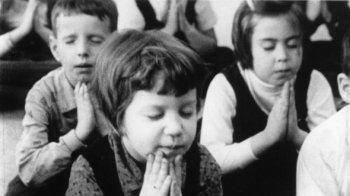 Towards the end of my daughter's first year of primary school, I was shocked to discover that it is mandatory that Religious Observance is offered in non-religious state schools in Scotland and in the rest of the UK. Coming from the United States, where this type of thing is not allowed in non-religious state-funded schools, I was left even more unprepared as the handbook for my daughter's school failed – even once – to mention the existence of Religious Observance.

The Easter performance prompted me to ask my daughter if she knows who God is. Her reply – "He is the man who saves people" – started me on a quest that continues more than a year later. I immediately withdrew my child from Religious Observance that year and have been meeting with the school and the local council to try and find answers. Why is there a section in the prospectus on Religious and Moral Education but not one on Religious Observance? Why is the RME overwhelmingly focussed on Christianity? Why haven't they let me come to a religious assembly to see what goes on? These questions have been hard for me to ask, but answers have been even harder to get.

At my daughter's school, I have been told that it is nearly impossible to withdraw a child from RME as it is intertwined with all the other subjects. I have been told that, even if my child is withdrawn from RME, she will still remain in the classroom while the lesson is conducted. She will just presumably not be taking part. When she is withdrawn from RO, she and any other withdrawn children currently sit in an adjacent room with the door open – still exposed to the messages I explicitly opted to keep her away from. My suggestion that they be withdrawn to a room in the main school building where they can have direct adult supervision and can avoid being further stigmatised by being forced to listen to the "fun" they are missing out on is rejected.

I view RO in schools as an archaic stab at indoctrinating our nation's most vulnerable and trusting people. I have talked to many other parents on the playground and beyond, and very few of them think the existence of RO is a good thing that should remain in our schools. Some view it as "just the way things are and it never did me any harm" while others go along to get along but actively teach at home against any religious messages their children pick up at school. Still others are against RO entirely but don't want to stigmatise their children or raise a fuss by complaining.

I think the bulk of the problem lies with the fact that head teachers have so much power and discretion in deciding how RO and RME are conducted at individual schools as well as how much information is or is not shared with parents. They have the absolute authority to decide what messages are given, how children are withdrawn. The religious temperature can vary widely from school to school.

I believe that Religious Observance should be a thing of the past at nonreligious state schools. While I see a lot of merit in Religious and Moral Education, I feel the guidelines for it should be explicitly stated and that all religions should be given equal weight alongside atheistic and humanist beliefs. Above all, parents shouldn't have to beg for information and transparency where their children are concerned. We have every right to know what the schools are teaching our children.

The author of the article is the parent of a pupil at a primary school in Scotland. The views expressed in this article are those of the author and do not necessarily represent those of the NSS.