The media now say ‘Islamophobia’ without question; but insist on the “so-called Islamic State” 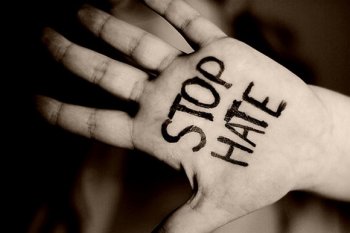 Reporting of the deeply troubling rise in anti-Semitic and anti-Muslim attacks demonstrates that the term 'Islamophobia' has, worryingly, been widely accepted by the media.

The recent media coverage which accompanied the release of worrying hate crime statistics by the Met Police revealed, among other things, that the term 'Islamophobia' is now accepted in the commentariat as an undisputed piece of English vocabulary.

Even the common use of inverted commas to denote to the reader that 'Islamophobia' is a disputed neologism has disappeared. The Telegraph ran the headline, "Islamophobic Britain: Where Muslim women are spat on, punched and covered in faeces". Such examples of anti-Muslim bigotry are shocking but the victims' suffering is not helped by inexact discussion of the problems that exist.

This unwise loss of journalistic caution is something I predicted in April; and the recent reporting of the hate crime figures seems to have done away with the use of this rightly cautious stylistic choice completely. Compare this with the widespread practice (particularly in the BBC) of referring to the "so-called Islamic State."

We are to take then from these two linguistic preferences that Islam is something to which people have an irrational 'phobia'; and that any violent manifestation of its traditions which claim to have a theological lineage from Mohammed, are in fact nothing very much at all to do with the faith.

I believe most people see through this; but the trouble remains that it cannot be a topic of polite conversation, because very healthy scepticisms about the material results of Islam are increasingly marginalised and articulated openly only by cranks and extremists of other kinds, not afraid of social ostracism in the normal way.

All of this of course benefits Islamists; whose lackeys within academia are fully on-board with the promotion of 'Islamophobia' as a moral evil equivalent to and as defined as anti-Semitism which, incidentally, increased by a far higher percentage than anti-Muslim attacks did; not that many people in the dominant media outlets noticed or cared in anything like the same way or with comparable emphasis.

I think that most people, including those who reproduced the alarmist claims about 'Islamophobia', do so for genuinely virtuous reasons – to sound the alarm on utterly despicable and indefensible attacks on Muslims. But there is a dangerous fogginess and a lack of clarity which could easily lead to hate speech laws punishing atheists, apostates, secularists and, for instance, Christian preachers.

In fact this isn't conjecture: such things are already happening. As I write this, in Northern Ireland the shameful and sinister prosecution of the preacher James McConnell appears to go on, and in Quebec a proposed hate speech law will, boasts the man in command of its implementation, be used to target "people who would write against … the Islamic religion." These are just two recent examples and there are many others without even dipping into the repressive catalogue of such things available from the Islamic world.

It seems very clear to me. 'Islamophobia' is now the accepted term to describe violent anti-Muslim bigotry. Critics of Islam are frequently labelled 'Islamophobic'. If an accusation is repeated often enough it shortly goes unquestioned. The aggravating and despicable 'Islamophobe of the Year' awards are not given to street thugs who pull veils off Muslim women, but to dead cartoonists and liberal Muslims. So we already know what Islamists mean and want by the term.

Hate speech laws and politicians (including Britain's own Ed Miliband) are keen to be seen cracking down on 'Islamophobia' and usually do not define what they mean: the NUS never replied to my request for their definition of the term.

It won't take many well-meaning politicians very long in the near-future to criminalise people who express their lack of patience for Mohammed's claims; Tony Blair already tried something like it with his de facto blasphemy law.

As sectarianism and attacks against Jews and Muslims continue their troubling rise across the West, and as Europe (though perhaps not the UK) accepts a large number of predominantly Muslim refugees, there will be many politicians who want to clamp down on troublesome priests with no time for religious syncretism, or 'militant' atheists who dare to make the same jibes, jokes and critiques at Islam's expense as they would of any other cult and creed.

The media acquiescence to this troublesome terminology is another marker on this path, and therefore worth noting in its own right. To use a religious idiom, the road to hell is paved with good intentions.

Benjamin Jones is the communications officer of the National Secular Society. The views expressed in our blogs are those of the author, and may not represent the views of the NSS.