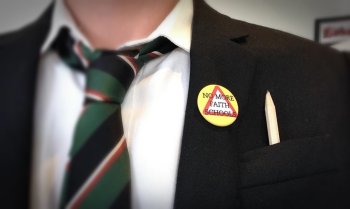 A Sixth Former gives a student's account of what it's like to attend a faith school if you aren't religious, and shows the reality of some faith schools for pupils who don't share the school's enthusiasm for religion.

One might be forgiven for thinking that Britain is a de facto secular country. We have religious freedom and generally speaking we enjoy freedom from religion too. After all, we are not seeing apostates, atheists, and agnostics executed in this country or subject to systematic persecution. There is one group of people in particular however who do not enjoy this latter freedom; the non-religious students who attend faith schools, like me.

We are allowing, with little opposition from any mainstream party, for a third of our state education to be provided in so-called 'faith schools', where religious organisations control the school, with the school's running costs provided by the state.

The case against faith schools is well explained by the National Secular Society and I have no intention of simply repeating the arguments. Instead I want to provide an account of what faith schools are really like for pupils. I believe accounts like mine, on my experiences so far at my local Catholic School, will show what the reality is for so many pupils in our state schools.

I was sent to my school in 2011. With effectively irreligious parents, who even sympathise with many of the criticisms against some of the failures of the Church in the past and present, I found this decision very confusing and protested it at the time. Nonetheless, my other school options were limited. Faith schools are so often presented as providing choice for parents and students, but this was a school that I never wished to attend. I was sent there because it was the best performing local school, but many parents and pupils have no choice at all in their local schools; so often faith schools are the only viable option.

Interestingly, I was permitted to stop attending my local Anglican church after my admission, leading me to believe that I was only made to attend so that I could be signed off as a practising Christian by the vicar, a widespread practice across the country. Under the admissions policy, this gave me an advantage over other people; another example of the unfairness of faith schools. According to statistics published in the school's Diocesan Report, we can deduce that there are around 24 non-Catholics at school with over 650 pupils. This hardly seems diverse or representative of my local community.

I was apprehensive before I started, and I was disappointed when I arrived. Since I have started attending my school, I have felt out-of-place because I feel so philosophically compromised by what the school is doing. I have been called out for not standing up in Mass. I've been told that "not responding with a significant amplitude to prayers" amounts to not supporting the school. I've had a request to self-withdraw from Mass denied on the grounds that it would 'encourage others to do so'. Despite parents supposedly having the legal right to withdraw their children, I've also had a request from my parents (who subsequently withdrew it upon its rejection) dismissed on the same grounds.

I've also seen students refusing to lead prayer told that "they have to" and that they should "go to another school" if they're unwilling.

Despite being a firm believer in equality myself, my school's SRE policy refuses to acknowledge the legitimacy of same-sex marriage and clearly states it's disapproval of gay relationships. Just imagine how homosexual pupils are made to feel by that. I expect better from a publicly funded school.

I have one final year left at school. Little can be done about my situation now, I'm too far into my education, but I think it has left a permanent scar on me. I will not look, as many do, at my secondary education with joy and nostalgia, but with disappointment and neuralgia. I urge readers to make their opposition to faith schools known to their MPs, join the NSS, and campaign in as many ways as they can to see this institutional discrimination come to an end.

This post was written by a current Sixth Form student at a Catholic faith school. The identity of the student has been kept anonymous at their request. The views expressed in our blogs are those of the authors and may not represent the views of the NSS.