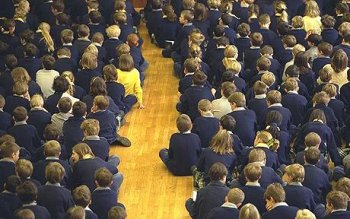 Even where parents have the option of a community school, securing a secular education can be difficult. One parent offers their perspective on negotiating appropriate boundaries which respect children's rights to form their own beliefs.

My support for secular education was influenced by my own upbringing in a household with mixed religious views. While at a CofE primary school I decided I didn't believe in a god but (with the support of a letter from our vicar) I was sent to a CofE secondary school outside of the catchment area.

Although my family respected my religious freedom and didn't thrust religion on me, the religious component of my state (tax funded) education, was enough to have me (pardon the pun) 'singing from the hymn sheet' of religion. My wife, similarly, was brought up with a state religious education (Catholic) before rejecting it in her teens.

This left me with the firm belief both that children should be able to make up their own mind about religion and that the role of education (whether in the home or school) should be to empower them to appraise their beliefs and others, without having one view foisted on them before they can reason for themselves. If after secular (by which I mean religiously neutral) education, which includes understanding of the roles of religious and non-religious beliefs, my son or daughter came to different conclusions than me, or the other adults/authority figures in their life, then who would I be to argue?

We love the school, and have been very happy both with our son's progress and their communication with parents. So we were surprised when our son came home telling us about God, and how he was 'in charge' and lived in heaven with Jesus. Where was he learning this?

We found out that, without communicating it to us, the school arranged visitors from a local church, which they have a relationship with. They come into the school, typically before the holidays, to do activities and to promote their summer holiday club. My son loved the activities, and really took on board what he was being told and believed everything being taught was fact.

We were infuriated and felt that our rights, and more importantly, those of our son had been infringed.

As long term followers of the NSS campaigns and activities, we were well aware of many of the issues surrounding RE and collective worship, and the NSS were able to offer additional support and help communicating our concerns to the school.

Very quickly I received a response from the school, and was invited to meet with the head of RE.

We had a very productive meeting with the head of RE, where we addressed our concerns, and the school explained their position. Most of our concerns were with the legal requirement for collective worship and the position this put the school in. We all agreed that the situation was far from ideal and I was worried that visitors to the school where taking advantage and using the opportunity to evangelise and proselytise.

Like the NSS, I believe that external groups (including religious) can make a legitimate contribution visiting schools. But just as if a political group were visiting I'd expect there to be appropriate boundaries on their behaviour and proselytization.

We discussed these boundaries with the school and they agreed to refresh training on this. Teachers are always present during visits and visitors should always be introduced with a clear explanation that they are going to talk about their own beliefs. Teachers should also monitor the presentation, to ensure that children are never asked to make declarations of their faith, or being taught aspects of the faith 'as fact'.

We were happy that the school was listening to our concerns, and that they were taking steps to ensure appropriate boundaries in such situations - a compromise we were prepared to accept.

However I do feel that it is very difficult for a child of this age to understand the nuances of being taught something 'as fact' as opposed to being told about another person's own personal beliefs - particularly when they seem to come from an authority figure at school.

We spent some time talking about collective worship and how actively children were expected to participate. Luckily the school at least follow a loose interpretation of the law and never ask children to pray, but instead give them the option. Once again, this choice is lost on a 5 year old when the authority figure who teaches them maths or science starts talking about God. However, as long as there is a requirement for collective worship in state schools, regardless of religious character, then this confusion will remain.

I was interested to hear if any children had been withdrawn from collective worship. Despite the mixed faith population of the school, no children have ever been withdrawn. However, I was surprised, and slightly saddened to hear that children had been withdrawn from visits to religious establishments. This was normally by children of religious parents who didn't want their children to visit places of worship of different religions. Although I'm absolutely opposed to delivering religious messages as part of a child's state-provided education, I strongly believe it is important to understand different cultures, particularly in the multicultural nation we live in. This kind of education builds tolerance and understanding - something which is in great shortage.

Although I wanted to know if children had been withdrawn, I don't see this as a viable option for us. Withdrawing children from collective worship draws undue attention, and it is hard for children to understand why they aren't being allowed to join in with the singing, and enjoyment of this part of the school day. My son so much enjoyed the activities when the church visitors were there, and I wouldn't want to deprive him of something which the other children are enjoying. It a choice we shouldn't have to make. If parents want to take their children to church, they are quite free to do so - secularism gives them that freedom, but education is a necessary part of every child's life.

Education needs to be education, and not a means to promote the subjective beliefs of a diminishing sector of the population. We need to teach children how to reason and think for themselves, rather than how not to.

The author of the article is a parent of a pupil at a primary school in Nottinghamshire. The views expressed in this article are those of the author and do not necessarily represent those of the NSS.