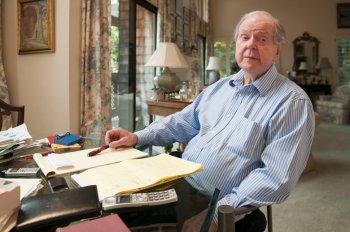 The late historian Robert Conquest exposed the true horror of Stalinism; and the 21st century badly needs a similar expose to break the pro-Islamist left away from their cruel sympathy with another totalitarian system, argues Benjamin Jones.

Robert Conquest, the historian of Stalinism who died this week at the age of 98, exposed the human costs and evil of Stalin's Russia to the world. In an age where we likewise see troubling numbers of young Westerners flocking to defect to a brutal regime far away, in a totalitarian 'utopia', imbued with a sense of historic inevitability in their task, the lessons of history couldn't be more relevant.

One lesson in particular comes from the late Professor Conquest, who did perhaps more than any other historian to disabuse some of the soft left of their romantic views about the Soviet Union.

Western politicians in secularised countries scramble around trying to understand the appeal of Islamic State to young, European Muslims. The parallels with the Soviet Union are obvious, and a useful frame of reference.

The left-Islamist alliance is well known, and often complained about. In one recent example, the Guardian newspaper published a critical piece on Maajid Nawaz, using anonymous 'sources' to smear him, while just a week prior, they had granted a free pass to the UK head of Hizb ut-Tahrir in a warm and at times fawning interview.

In academia, there is a well-established pro-CAGE lobby, which defends preachers like Haitham al Haddad who they say expresses a "conservative strand of Islam" on what they euphemistically call "questions of sexuality." Here is Haddad describing homosexuality as a "crime". Tom Owolade wrote a rebuttal to these academics, bemoaning that once again 'progressives' were "allying with theocrats"- he notes, "again."

I've had my own little tangle with the pro-CAGE lobby, and I get the impression that their infatuation does resemble the worst sort of 'religious' faith- it seems to take no interest at all in evidence or proof. I do not think that any material provided to them about CAGE's sympathies, or any evidence of support for a theocratic caliphate among a significant minority of Western Muslims would ever lead them to reconsider their views.

Their essentially anti-Western ideology is so dominant that it drives out other considerations- and other values of the left. This is a type of 'mission creep' as they drift from anti-war politics as a start, to anti-Western views and then to serving as outright apologists for Islamism.

This lobby has started making its own allusions to the Cold War. Perversely, Deepa Kumar, a lecturer in media studies, described ex-Muslims as "McCarthyites", and the Miller set (usually including Tom Mills and Narzanin Massoumi) have likened counter-terror and counter-extremism/radicalisation policy to a crackdown on dissent in the style of the Cold War.

It seems the real crackdown on dissent is coming from their side, targeted at ex-Muslims and those who have actually lived through Islamist regimes and escaped, or else endured austere, orthodox and unhappy times in isolated communities in the West. Like so many varieties of the conservative religious experience, these childhoods sound to me like private dictatorships in the family home.

The obfuscation, the obscurantism, the moral failure and the intellectual cowardice, the lack of curiosity about the Islamist agenda (so artfully parodied by Mo Dawah), are all features of this leftist strand by no means limited to the few examples above.

There is something very familiar about the way these Western 'liberals' dismiss as unrepresentative survivors of Islamist regimes. It resembles the way in which exiles of the Soviet Union were dismissed as mentally ill if they "doubted the merits of Soviet socialism", or rubbished as counter-revolutionaries, or right-wing reactionaries. These people were painted as- at best- tools of the right wing to rubbish the Soviet 'utopia'. In fact much of this same language is now being recycled. Ayaan Hirsi Ali is frequently branded as "right wing" (and therefore irredeemable)."Neocon" is the more modern translation of "counter-revolutionary."

The pro-Islamist left intellectually tortures itself over people like Ayaan Hirsi Ali, at its most charitable claiming that they and their causes are hijacked by 'Islamophobes' to promote a 'racist' agenda, used by groups who use the 'cover' of protecting women's rights in Islamic societies to disguise some ulterior agenda. This is a familiar refrain.

So who can break this spell? A new Robert Conquest could even borrow much of the great historian's title, "The Great Terror" works obviously well as a description of the Islamist threat. Like many I hope there is someone out there who can finally intellectually smash this infatuation many on the left have with Islamism. It isn't just a case of intellectual honesty, but physical courage as well. I fear too many Muslim leaders appalled by the Islamic State are too afraid to speak out. They face physical threats, and the constant, ceaseless attacks in the media from the pro-Islamist left and from genuine reactionaries within their faith. There are some notable exceptions, Manzoor Moghal of the Muslim Forum for instance.

The anti-totalitarian left, a tradition with roots in the left-opposition to the Bolshevik Party, is a good hope. It's infuriating for those on the right to have to contend with these misplaced and cruel sympathies; but I think it is more enraging for those on the left. As Douglas Murray put it: "They must stay and fight their political corner and make the left decent again."

The struggle isn't about left or right; it is about resisting totalitarianism. But so many cannot even meet this basic ideological challenge.

One other point on Conquest: there is a similarity in his own life with a group which is now the key to unpicking our modern troubles. Conquest was a Bolshevik sympathiser in his youth, before becoming chief among its most trenchant critics. As Maajid Nawaz and others show today, the most powerful and sophisticated critique of any extremist ideology (religious, political, or both) often comes from one who was once on the inside, and a true believer in the doctrine. The 'utopia' can more easily appeal to those who have never seen it, but feel out-of-place in their home country for whatever reason, than to someone who has seen it and knows the truth.

Similarly with cults, as with extremist groups; the most powerful exposes of Scientology and the Westboro Baptist Church have come from former devotees.

If I am being more downbeat about the chances of a Conquest-like figure emerging, I remember the quasi-religious nature of the pro-Islamist 'belief system' on these parts of the left, and despair that no appeal from evidence may actually change their minds; just as there are those who still believe Stalin was a heroic figure.

There are important differences between Islamism and Stalinism: Stalin's crimes were obfuscated by the regime, the Islamic State post theirs on YouTube. There is no excuse for not knowing today what Islamist regimes (frankly indistinguishable from IS) are really like, or what they seek across the globe.

The pro-Islamist left are in the intellectual lineage of the Gulag-deniers; is there any hope they will see the light on Islamism?