Anti-Muslim bigotry and the problem, with ‘Islamophobia’ 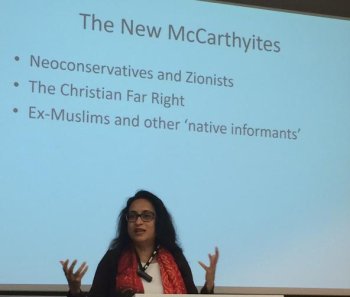 Islamists are again using the victims of anti-Muslim bigotry to advance their agenda. Once again, a British university has aided this project in a conference on 'Islamophobia' which undermined and demonised ex-Muslims as "McCarthyites".

Many, many Muslims are victims of bigotry; but their suffering is being used by organised groups and campaigns to advance an Islamist agenda- enacted and expounded in 'their name', on 'their behalf', in universities across the UK- with the tacit support of many on the 'left'.

Bath University has again embarrassed itself by hosting a conference of crypto-Islamists, conspiracy theorists and the 'left-wing' fellow travellers of Islamism. Much of the conference was devoted to scaremongering about 'Islamophobia' and the demonization of ex-Muslims as "McCarthyites".

It shouldn't be forgotten that among the many victims of anti-'Muslim' bigotry are ex-Muslims, non-devout Muslims, or even Sikhs- and others who are mistaken for Muslims but have no connection whatsoever with Islam. Tackle anti-Muslim bigotry, but don't try to make out 'Islamophobia' is a bigger threat than the large minorities (and often large majorities) of Muslims around the world who hold extremely, severely regressive views. The evidence shows this is false.

Four of the attendees wrote on OpenDemocracy before the event that "the status of Muslims in the west is under threat" in an article called the "five pillars of Islamophobia".

They warn of an "increased prevalence" of "anti-Muslim hate crime". 'Islamophobia' is "deeply embedded in our politics and society" they inform us. There is a "state of hysteria about Islam", they write. They lazily use the phrase "anti-Muslim racism"- which makes as much sense as "anti-Christian racism": because in fact "Muslims are the most ethnically diverse" religion in England and Wales.

Just to give you a sense of their ideology, David Miller, one of the authors of the "five pillars" piece and organiser of the conference, wrote in 2011 that Islamism (which he placed in scare quotes) was just a "catch-all term for politically active Muslims" invented or used by "conservative think tanks".

Their thesis about rising 'Islamophobia' in wider society is spurious to say the least; though there is some evidence that anti-Muslim attacks have increased, the sentiment behind them is demonstrably not widespread (as Pew found). In research conducted since the attacks on Charlie Hebdo, Pew found that Europeans actually have a strongly favourable view of Muslims. 61% have a favourable view; 33% an unfavourable one. Views are even more favourable in Britain.

Despite all the talk of an 'anti-Muslim backlash', Pew found that in the UK, less than 1 in 5 people have an "unfavourable" view of Muslims (19%); compared with 37% for "Gypsies or Roma", and 7% for Jews.

Pew found that the poll ratings of Muslims actually rose in France "after Charlie Hebdo, just as in U.S. after 9/11". Not exactly what you would call a 'backlash'. The evidence shows that the greater "hysteria" that exists in society is about the non-phenomenon of 'Islamophobia'. Of course, the academics involved have grants to secure and career-ladders to climb, so they will continue to peddle this fashionable falsehood for as long as they can.

If 19% (at the most generous to Miller et al's theory) is a figure of reasonable concern, what other views might we trouble ourselves with that poll well above this baseline?

Is the fact that 25% of British Muslims under-34 disagree with the statement "acts of violence against those who publish images of the Prophet Mohammad can never be justified" a legitimate cause for concern? Or am I 'demonising' Muslims by raising it?

Is it 'Islamophobic' to point out that 30% of Muslims aged 18-34 have "some sympathy for the motives" behind the attack on Charlie Hebdo?

Equally, is it wrong to be gravely concerned that in 2007 "36% of 16 to 24-year-olds believe[d] if a Muslim converts to another religion they should be punished by death", and that younger Muslims were much more likely than their parents and grandparents to take this view? 19% of over-55s also agreed with the death penalty for apostasy.

Likewise, the death penalty for apostasy polls extremely well in many Muslim-majority countries: 86% support in Egypt, 82% in Jordan, 62% in Malaysia.

Is it 'Zionist' or 'right-wing' of me to fear that no less than 37% of young British Muslims in that same poll 'preferred' to live under sharia law? (And we wonder why ISIS appeals to so many now: the base of support for a sharia-run state existed in the UK long before the Islamic State did).

Is it McCarthyite or "neo-conservative" to raise the alarm that "Muslims in Britain have zero tolerance of homosexuality", as reported in that trenchantly right-wing, Zionist publication… the Guardian.

If 19% is cause for concern about the bogeyman of 'Islamophobia' (which is almost always left undefined), surely it is not wrong to also consider it problematic that 89% of Pakistanis and 55% of Bangladeshis who say Sharia should be the law of the land (84% and 82% respectively) "favour stoning as a punishment for adultery". What percentage of British Muslims of Pakistani or Bangladeshi heritage share this view?

There are doubtless many British people who do hold bigoted and/or ignorant views of Muslims and we must confront those that do: the case of ten pupils prevented from attending a school trip to Exeter Mosque over their parents "safety concerns" about "terrorist groups such as ISIS" is a good example. But the research shows this to be a minority; and, crucially, a much smaller minority than the percentage of British Muslims who hold extremely concerning views on gay people and apostates.

Islamists – pushing their 'Islamophobia' narrative- are aided by people like Deepa Kumar, an 'expert' on 'Islamophobia' and Professor of Media Studies, who was pictured (above) at the Bath conference under a slideshow which included "Ex-Muslims and other 'native informants'" on a list of "the new McCarthyites." Attacking ex-Muslims is also an attack on non-devout, liberal and secular Muslims. As for the nasty term "native informant", I couldn't possibly critique it better than Sarah Haider of the Ex-Muslims of North America, who has spoken out on how this sinister phrase is use to marginalise ex-Muslims.

On the one hand these 'experts' warn about persecution of Muslims, on the other they collaborate to make the precarious position of apostates even more dangerous: have they no sense of decency?