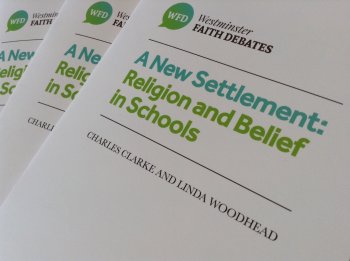 Faith-based schools have been part of Britain's educational landscape for a long time. But as Britain's religious outlook changes, the time has come for some people to come to terms with their fear or unwillingness to question them, argues Stephen Evans.

Britain's religious landscape is rapidly changing. Polling consistently shows that a majority of Britons are not religious. The share of the population which is religious is also increasingly fractured into growing minority faiths. The proportion of people saying they are Anglican has fallen by two fifths in 10 years and Islam is set to grow rapidly in the UK this century. It's clear that our schools have a vital role to play in building social cohesion.

Given the conflict that plagues societies in which religion, sectarianism and segregation permeate every facet of life, it seems short-sighted to suggest that children's education should be organised around religious identities.

But that's exactly the recommendation of a new report calling for a new settlement on religion and belief in schools.

The policy proposal, published by former education secretary Charles Clarke and sociologist Linda Woodhead, recommends that "children of families of faith should where possible be able to attend schools of that faith, and that their current right to be given priority in the admissions process should not be removed."

There is an important debate to be had about the role of religion in schools, and this report makes an important contribution to that debate, but given Britain's rapidly changing demographics, this particular proposal strikes me as a dangerous recipe for yet more religiously segregated schooling and greater religious discrimination: the very features of our education system we should be distancing ourselves from – not endorsing. It also raises important questions over the value we place on young people's independent rights and religious freedom.

But the recommendation should come as no surprise. As far as education policy is concerned, faith schools have long been a sacred cow.

Much of the media commentary around the launch of the policy proposal centred on the long overdue recommendation to abolish the legal requirement on schools to provide a daily act of Collective Worship.

This really shouldn't be considered as a bold or even controversial proposal. The current legal position has zero credibility, is widely flouted and apart from the Department for Education and Church of England hierarchy, which are looking increasingly isolated in their archaic and entrenched positions, most people now agree with what secularists have been saying for decades - that the state shouldn't be mandating acts of worship by law.

The report also has interesting things to say about the way in which religious education is organised. Whilst some of the recommendations may be a step in the right direction, making progress will prove difficult – particularly with so many vested interests involved in the subject.

It's also doubtful whether the proposals go far enough to repair RE's tarnished reputation or to ensure that young people receive the sort of religion and belief education that allows them to take a truly objective and critical approach to the consideration of moral and ethical issues.

But it's the report's failure to advocate for a child-centred, inclusive and secular education system, based upon principles of equality and fairness, that most disappoints.

I raised these concerns with the authors at the report's launch event at the House of Lords. But one gets the clear impression, even from many of those arguing for the continuation of faith based schools, that their heart isn't really in it – it just that tackling the issue is in the 'too difficult department'.

In response my point about the undesirability of faith schools, two main reasons were advanced for not calling time on them, firstly; that it would be politically impossible; that parents simply wouldn't accept the discontinuation of them, and second; that it would be problematic from a human rights perspective.

On the first point, it's necessary to get one thing clear. Nobody is advocating the mass closing down of faith schools overnight. Parents would rightly be angered by that and why would anyone want to close down good schools and disrupt children's education. That's not what we're talking about. The way to a secular education system is to phase faith schools out starting with a moratorium on opening new ones.

It's certainly true that the churches and other faith groups would take exception to this. But in the main, parents aren't clamouring for faith schools. What they really want is good local schools. Linda Woodhead's own research confirms that academic standards, location, discipline and ethical values far outweigh faith-related reasons for choosing schools. Just 5% of parents would choose a school on the basis of giving a "grounding in faith tradition"; and only 3% for "transmission of belief about God".

Polling also indicates no real appetite for faith-based schools. Only a third of the adult population approve of state funding for faith schools. Nearly half actively disapprove, and the rest say they 'don't know'. Two-thirds of Muslim parents wouldn't want their children to go to a Muslim state school, if given the choice.

But even where parents do demand faith schools, such demands for a religious education, wholly on parents' terms, is simply unreasonable. Schools are not the place to push ideologies, political or religious. It's hardly the role of the state to promulgate Anglicanism, Catholicism, Islam, Hinduism, Sikhism, Judaism – or atheism for that matter – through state education.

And whilst some ultra conservative parents may want to keep their children insulated from 'gentiles', 'kuffars' and 'infidels', the state should really think twice about actively encouraging that.

The second argument – that moving away from faith based education would interfere with parents' human rights, just doesn't stand up to scrutiny.

The courts have ruled that the right to education provided by Article 2 Protocol 1 of the Human Rights Act gives a right of access the education system that already exists. It doesn't require the government to provide or subsidise any specific type of education and it certainly doesn't oblige the state to fund religious schools of any kind.

Although parents have a right to ensure their religious or philosophical beliefs are respected during their children's education, this is not an absolute right. So long as these beliefs are properly considered, schools can depart from them if there are good reasons for doing so and it is done in an objective, critical and pluralistic way.

The notion that a system of inclusive, secular schools offering an objective and balanced education with equal access and esteem to all pupils would breach parent's human rights just isn't credible.

The fact that many parents can't avoid a faith-based education because they happen to be in a faith school's catchment area is far more injurious to parents' right to education. The Government's plans for 500 new free schools over the next five years, which could result in a proliferation of faith-based schools, should be a far greater concern for those worried about religious freedom and parental rights.

Attempts will be made to discourage unfair admissions arrangements and open up faith schools to all young people. Whilst any reduction in the degree of discrimination tolerated in our schools is welcome, it does leave you with the problem of religious organisations running schools as if they're religious communities when they quite clearly are not. The potential for conflict and risk to community cohesion there is clear. Many non-practising 'cultural Christians' tolerate church schools (and if their results are good, may even feign belief to get into them) but will be less likely to want to send their child to an Islamic, Sikh or Hindu free school. Such schools are likely to remain undersubscribed silos of segregation. However limited school places are, parents will still rightly expect to be able to secure a state education without a religious ethos being imposed on their children.

But I for one wouldn't want to see religion jettisoned from schools. Objective religion and belief education is valuable in helping young people to understand the significance of religion in society, and the importance of faith to many people.

But far more important I think, is integrated schooling. The best way of building mutual understanding, trust and the common values that we're going to need in multifaith Britain, is to ensure that our publicly funded schools are spaces where children and young people of all backgrounds are encouraged to learn and live together side-by-side.

We've almost won the argument on compulsory worship, let's just hope we don't have to wait so long for people to finally admit that organising education around parents' religious beliefs really isn't the greatest idea.