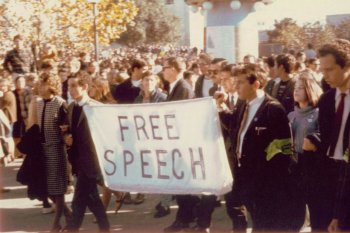 A paper published by the Leadership Foundation for Higher Education has claimed that atheists can be "militant" on university campuses, while describing religion as a "public good" and the exclusion of religion from the public sphere as "repressive."

Professor Craig Calhoun, Director of the London School of Economics, has said atheists make "free speech an issue" in efforts to "challenge the faith and beliefs of religious students". He described "controversies over religious cartoons" as 'disruptive to "campus harmony" and compared rows over free speech and blasphemy to 'clashes' between religions.

The Professor referred to his university's outrageous censoring of students for wearing "Jesus and Mo" t-shirts as a "small episode" and said that "harmony was restored eventually but not without acrimony, accusations and threatened lawsuits." Professor Calhoun fails to acknowledge that any friction was ultimately down to censorious student union officials ordering the removal of materials they deemed "offensive" and the threats of physical removal from LSE officials unless the students censored themselves.

The National Secular Society supported the students involved, Chris Moos and Abhishek Phadnis, back in 2013, after they were threatened with being physically removed from the LSE Freshers' Fair unless they covered the 'offensive' t-shirts. At that time, Professor Calhoun said staff had "acted in good faith".

The two said that LSE only issued a "half-apology" for the scandal, and noted that it "took the threat of legal action to elicit an acknowledgement of our grievances." In spite of this, Calhoun still complains about the action needed just to bring about LSE's feeble response.

Now however, the Professor has said, "Atheists have recently grown more active – even militant – within universities, often making free speech an issue as they seek to challenge the faith and beliefs of religious students." He accused "new atheists" of 'making a point' of "mocking religious convictions and symbols."

The Professor might be advised that it isn't atheists making an "issue" of free speech all across the world; this right is under attack almost daily from militant Islamists. In his paper, he gives the appearance of begrudging the inconvenience caused to university administrators when atheists and others simply make use of their most fundamental rights. It isn't 'militant' atheists threatening anyone.

On events at the LSE Fresher's Fair, Calhoun also says that LSE students "approached Muslim students … wearing T-shirts taken to mock Jesus and Mohammed." This seems to be factually incorrect; Moos and Phadnis' own account of the events reveals that LSE Student Union officials approached them, and began removing material from their stall at the Fresher's Fair. Calhoun's language sounds deliberately loaded, to imply that members of the Atheist, Humanist and Secularist society sought confrontation, when in fact they were "manning the stall" at the Fair.

It seems like we will have to keep making this point, I certainly don't plan to stop, but "harmony", "cohesion" and "feelings" do not, must not, cannot trump the most fundamental rights of all- like freedom of speech and expression.

In his paper, Calhoun seems extremely dismissive of secularism. He writes, "Attempts to exclude [religion] from the public sphere are intrinsically repressive." He doesn't seem to mind the LSE Student Union physically, literally excluding atheists, humanists and secularists from a literal public space though. His institution had to be threatened with legal action just to exact a modest "half-apology", as the students in question described it.

Extending his analysis, the Professor compares secularism- and the concept that religion and the state should be separate (not that religious people may not fully participate in public life)- to exclusion and repression of Catholics.

Worryingly, he also writes, "the pursuit of integration shouldn't block attempts by minorities to create their own cohesive groups. Without some level of self-segregation, those in small minorities will always have relationships mainly with members of the majority – and so will the majority."

Given the almost weekly defections of young Muslims to the Islamic State, is "self-segregation" really any part of the answer? Is it not in-fact a key part of the problem?

Benjamin Jones is the communications officer of the National Secular Society. The views expressed in this blog are those of the author, and may not represent those of the NSS.