Most Britons aren’t religious- but are religious ‘voting blocs’ wielding increasing power in our elections? 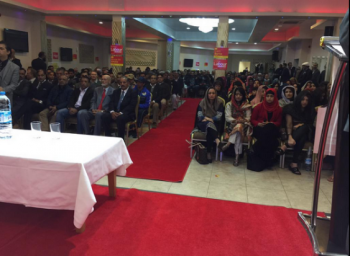 Religious leaders are wielding disproportionate influence in this election. Benjamin Jones argues that this is likely to get worse, and politicians should resist the urge to treat religious people as blocs.

While the religious are declining as a share of the UK population, we are witnessing sectarian, religious politics on the rise – and not just in the egregious case of Lutfur Rahman.

From a politician's point-of-view, there are powerful incentives to encourage sectional, bloc-based voting- based on ethnicity and/or religion. Religious leaders can deliver hundreds of voters, community activism and outreach that is essentially unmatched. In an era of collapsing party membership, this is more valuable than gold.

The Henry Jackson Society found that Muslims- though numbering less than 3 million in the 2011 census- are poised to influence vital marginal constituencies and may tip the balance of the 2015 election.

While you can dispute whether religious bloc votes exist, and to what extent they can be harnessed, British Muslims are unusually politically homogenous. In 2014 some 73% said they supported Labour.

This leads to politicians courting religious blocs, and their treating religious communities as monoliths. The relatively disproportionate power of religious groups has led to politicians in this election promising to outlaw 'Islamophobia', continue to block legislation banning caste-based discrimination, and pledging to expand 'accommodation' for religious people who want to discriminate against homosexuals.

Not only do more homogenous religious groups achieve policy concessions (at least in manifestos), but voters within these groups are engaged by political parties explicitly as 'religious voters'. This is as true of UKIP's 'Christian Manifesto' as it is of the scandal of Labour MPs addressing a rally segregated by gender. You can debate whether the blocs exist, but politicians are increasingly behaving as though they are real.

The gatekeepers to these locally powerful groups are often socially conservative, orthodox figures- and almost always men. By approaching religious groups as monolithic entities in this way, 'minorities-within-minorities', like gay Muslims or women in orthodox religious groups, are disenfranchised.

Though not very widely reported, there have been real scandals in this campaign as politicians try anything to harness these groups.

The most widely reported- and perhaps least commented on by politicians- was the case of the Labour MPs who attended a gender segregated rally, and then tried to claim that the segregation was not enforced by organisers but arose spontaneously, despite attendees reporting that they were told by organisers to sit in gender-segregated zones. It goes without saying how unthinkable it would have been for politicians to appear at an event segregated on criteria other than gender. Religion gets away with it- despite the talk being a non-religious election event.

There are many other examples from this election: leaflets were sent out endorsing Conservative Bob Blackman, using divisive rhetoric about caste-discrimination, and praising him for voting against legislation outlawing caste-based discrimination.

In response he said that Islamic extremists had sent leaflets opposing him and supporting Labour. At the time of writing these leaflets have yet to surface.

Labour candidate Simon Danczuk, seeking re-election in Rochdale, tweeted a picture of himself with twenty or so Asian men- and no women- under the caption "such a diverse political culture in Rochdale – does make elections fun as this rally today shows!" He was lambasted for the post, and challenged over how a photo with no women or non-Asian men (save for Mr Danczuk himself) could possibly be 'diverse'. This just goes to show who is omitted by 'bloc' politics.

Elsewhere, the National Council of Hindu Temples was urged by the Charity Commission to remove a statement from their website which said Hindus voting for Labour or the Liberal Democrats (who are seeking to implement legislation to outlaw caste discrimination) were like "turkeys voting for Christmas."

There are countless other examples. One Tory candidate claimed that Labour campaigners used his sexuality to persuade Orthodox Jewish voters not to vote for him. Mike Freer, standing in Finchley and Golders Green, said: "Some of my Orthodox Jewish councillors were out knocking on doors and three residents also mentioned that they had had Labour round, and it had been brought up again, and they could no longer support me because I was gay."

The Exclusive Brethren – which gained charitable status for nearly 60 of its congregations in the past year under the Coalition- are said to be campaigning and 'praying' for a Tory victory.

This seems to be the shape of things to come- and it is a deeply troubling, non-trivial problem. The appeal to religious bloc votes is extremely unwelcome and the temptation for politicians to appeal to locally powerful but essentially reactionary figures should be resisted, not least because most people in the UK are not religious.

The disparity is compounded by the fact that there is no such thing as an 'atheist/non-believer bloc vote' to counteract these influential religious figures. Nor should there be: such a coalition would be nonsensical, the only thing holding it together would be a rejection of theistic, supernatural beliefs. Equally, a 'secular voting bloc' would be impossible. Secularism is (and should be) non-partisan. This does place us at something of a disadvantage however.

Religions wield disproportionate local influence; nationally the demographics are clear- most Britons are not religious. Vote-seeking politicians however are susceptible to religious influence, because 'community leaders' can command (or appear to command) a significant, unique local following- particularly in the vital marginal constituencies. This can all too easily lead to a privileging of religion and a 'multi-faith', essentially anti-secular, approach that shuts out the non-religious. It seems to skew how politicians view religion.

Another problem facing the non-religious and/or secularists is that on secularist issues there are essentially only 'least bad options' in the political mainstream. It is hard to cast an affirmative vote for secular policies- particularly on the right or centre-right where very few such options exist.

Secularism means a clear separation of church and state; but the separation of religion and politics is far more complex. There is a fine line between religious people being involved in politics – to which there is no reasonable, secular objection- and religion becoming involved in politics, which is a different matter altogether- and one to be wary of in this and future elections.