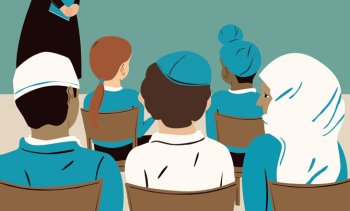 In a pluralist and diverse society, it's an invitation to ignorance for children to be segregated by their parent's religious affiliation – so why, asks Oliver Kamm, is the state entrusting the education of huge numbers of children to religious bodies?

Whenever someone is described in the media as a person of faith, there's a dispiriting inevitability that it will be meant as a compliment. So consider the declaration by the Hasidic Belz community in north London that the children of mothers who drive them to school will be turned away at the gates. Women driving is, say the rabbis, "contrary to the rules of religious modesty in our camp".

In a cosmopolitan capital city in the 21st century, it takes deep religious conviction to publicly hold women in such contempt. Yet so accustomed are we to the place of religion in public life that we risk overlooking another scandalous aspect of this episode: hundreds of children are being educated at the sect's two north London schools. Ofsted ranks both of them as "good". Did the inspectors ask what the children were being taught about the place of women in society? Or was this deemed a matter of religious choice?

Religious liberty is integral to a free society. That means the state has no business conferring privilege on particular viewpoints. Dissenters in the 18th and early 19th centuries fought hard for the repeal of the Test and Corporation Acts, which barred non-Anglicans from public office. Their reasoning influenced Thomas Jefferson, who in 1819 founded the University of Virginia as a secular institution, having no professor of divinity.

Yet the education of huge numbers of children is entrusted to religious bodies that can drill them in sectarian doctrines. Publicly funded faith schools make up a third of the primary and secondary education system. We have an established church to which few people listen, let alone belong, yet a quarter of primary schools and one in 16 secondary schools in England are Church of England schools.

Periodically, the agendas of some faith schools are exposed as being at odds with the values of tolerance and education. A publicly funded Orthodox Jewish girls' school in London was found in 2013 to have censored exam questions for its pupils on evolution and human reproduction. The exam board had agreed to this on the grounds of sensitivity towards religious belief. Fortunately the exam regulator, Ofqual, has now banned this practice but the case illustrates a ruinous public deference to religion.

Faith is a private choice in which the state has no legitimate interest. Parents are entitled to bring their own children up in a way consistent with their beliefs. They are not entitled, however, to shield children from knowledge. That principle is widely accepted. Where science classes are concerned, the Department for Education in England says that it will accept no proposal for an academy or free school that intends to teach creationism.

That's right but inadequate. No existing school, of any type, should be permitted to spread beliefs that are intellectually fraudulent, such as hostility to science or a conviction that women don't belong, literally and metaphorically, in the driving seat. And because religious affiliation divides people into groups, faith schools undermine common citizenship under the rule of law.

There should be no more publicly funded faith schools. In a pluralist and diverse society, it's an invitation to ignorance for children to be segregated by a characteristic that is, for all civic purposes, totally irrelevant. While faith schools exist and get public funding, they should have no ability to select children according to the religion of the parents. Above all, policymakers should recognise that the ethos of faith is, by definition, hostile to learning. It is long past time to get it out of the classroom.

Oliver Kamm is a leader writer and columnist for The Times. This article was originally published inThe Timesand is reproduced here with kind permission. The views expressed in our blogs are those of the author and do not necessarily represent the views of the NSS.