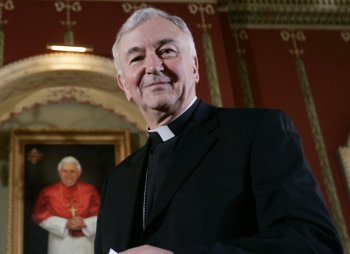 It's grossly distasteful to equate the persecution of Christians in the Middle East with the discomfort felt by some Christians in Britain at having to provide services in a non-discriminatory manner, argues Alastair Lichten.

Cardinal Vincent Nichols's recent column in the Telegraph, entitled 'What are our leaders doing about religious persecution?' seemed to start off on the right track. The issue of religious persecution around the world should concern us all. The next Government must do more. It should appoint an ambassador for freedom of religion and belief. It should push for the global abolition of blasphemy and anti-conversion laws - which are used so widely against Christians and others.

People of all faiths and none are deeply concerned about the ongoing persecution of Christians and other religious minorities in the Middle East. Secular organisations across the world have been visible in calling for better protections for freedom of religion and belief. Meanwhile religious minorities such as Coptic Christians in Egypt have been calling for the protection of a secular state.

Against a backdrop of Syrian Christians being driven into exile, Yazidis being sold into slavery and Saudi Arabian Christian meetings being broken up by the religious police, it is deeply shameful and embarrassing for Vincent Nichols to equate (as he goes on to do) requiring public services to be provided in a non-discriminatory fashion with persecution.

Nichols got all the way to his third paragraph (or his fourth if you're being exceptionally charitable) before trying to capitalize on genuine tragedy to promote his own agenda. It comes as no surprise that Cardinal Nichols dislikes "secularist ideology" – or at least his fantasy version of it – after all, being marginally less privileged is probably the worst form of marginalisation that the Cardinal has experienced.

To even conflate secularism and religious fundamentalism as the cardinal does is ludicrous. Secularists seek to challenge religious privilege and strive for a society where all are treated equally in public life regardless of belief or lack of it.

Cardinal Nichols's claim that greater state privileges for his preferred form of religion (including religious based schools and other public services) would act as a "bulwark against fundamentalism" are cringingly self-serving.

But sadly we've come to expect it. When hardline Islamists sought to take over secular state schools in Birmingham, the Archbishop of Canterbury's response was to call for more Church of England schools. The Islamist far-right seek to divide our country along religious lines and the nationalist far-right call for a stronger assertion of 'our Christian identity'.

Mr Nichols believes: "All public institutions should recognise that faith is at the core of our society". Should the majority of Britons who are not religious recognise this? What about the larger majority who are simply indifferent to, or don't want to be defined by, religion?

While most secularists would surely welcome the charitable work done by many Catholics and Catholic agencies, attempting to leverage this for religious privilege is unseemly at best. It is important that faith-based welfare services, which will never be suitable for all citizens, compliment and do not seek to replace state provision. Mr Nichols insists that government at all levels should uncritically support religious organisations providing core public services "in accordance with their beliefs".

This could lay a dangerous path towards the breakup of the secular welfare state which is blind to religion and treats everyone as equal citizens first and foremost.

The Cardinal's own Church's child abuse scandals show the terrifying potential for institutional abuse of power when state and religious functions become so deeply intertwined.

Curiously I've yet to meet a single Christian whose volunteering is conditional on religious privileges being maintained. I don't know a single Muslim who would leave helpline I volunteer for if they were prevented from using their position to proselytise. And I can't imagine a Hindu colleague saying they'd like to spend their Saturday evenings supporting at risk youngsters but only if they're allowed to discriminate against the gay ones.