What do the minor parties have to say about secularism and religion? 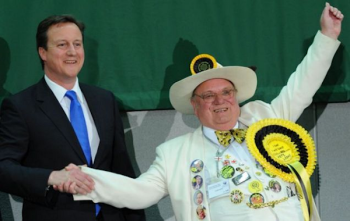 From the Wessex Regionalists to the Christian People's Alliance, the NSS presents some highlights on secularism and religion from the minor parties' manifestos.

Which party wants to place unicorns on a list of protected animals? Who wants to give married couples £10,000 if they go on "marital awareness training"? Which manifesto argues that communism and cross-dressing have taken over non-religious schools? Read on to find out more…

As part of our General Election coverage, we've been going through the party manifestos to reveal their stance on secularist issues like faith schools and the role of religion in public services.

We've already picked out the highlights from the Conservatives, the LibDems, the Greens, UKIP, Labour, the SNP and Plaid Cymru. Now we take a look at some of the smaller parties.

The Christian Party says that "Britain's education system is rooted in our Judaeo-Christian heritage" but has been taken over by "communistic ideals." It warns of pupils cross-dressing in schools, and the Government's "pro-homosexuality" agenda. Their manifesto states that education has been "eroded by the secular and multifaith agendas".

The Party says they will "refocus education on the basics of the core curriculum of reading, writing, mathematics, science, languages and modern studies".

The party argues that there is "waste of education resources on peripheral" activities, but despite this they argue that "the obligation to assemble pupils for an act of Christian worship, including praise and prayer, should no longer be ignored."

The Party challenges the teaching of evolution, and believes that "the Science curriculum should include the evidence of creation and design in the Universe, presenting evolution as an alternative hypothesis rather than falsely depicting it as a proven fact."

PHSE will be reformed with "Christian content." The party "supports a wide variety of corrective measures in schools" and promises to "bring normality back to childhood". They state that "Sex education needs to be in the context of traditional marriage. The Christian Party will promote true love in its education policy."

They also believe that the current Government's plans on sex education "will sexualise children at an early age." Their manifesto states: "Given the coalition's pro-homosexuality agenda, sex education for five-year-olds amount to state-sponsored sexual indoctrination."

The Christian Party warns, "the cross-dressing of primary school children is an abuse of the school environment and of the children themselves. We resist the use of schools for the LBGT political agenda, such as promotional months, and government backing and financial support for their literature and campaigns. The Christian Party continues to call for the end of the promotion in schools of the LGBT agenda, which is now appearing in other subjects across the curriculum."

On healthcare, the Christian Party says the NHS should not provide services "based on lifestyle choices" such as abortion.

The Christian Party claim they will "will restore proper respect for our neighbour by removing the inequalities in our equalities legislation."

Their full manifesto can be read here

The Christian People's Alliance say "the breakdown of marriage is costing the country £49 billion." They plan to "change the whole culture of our society" and claim this will "claw back substantial amounts of this money."

Though they aim to reduce the size of government and cut spending, they want every married couple to be given £10,000 "on the occasion of their first marriage", if the couple go to three sessions of "marital awareness training."

Another grant will be available to parents who have a child "within wedlock."

On education, the party believes that "sex education should teach the high value of marriage for personal and societal enrichment" and that sex outside of marriage exposes "participants" to sexually transmitted diseases and abortion. They say children should be taught that "'safe sex' is a misnomer" and that "marriage is the best protection."

They stress the importance of teaching children to "preserve one's sexual organs for marriage."

The party states "all students should understand that Christian worship benefits society" but that pupils should only participate in collective worship at school if they wish to. They plan for a "broad curriculum" in faith schools.

The Christian People's Alliance call for "strong principles of good and evil" in the health service.

On the environment, the manifesto laments that "all of western man has never been totally committed to Genesis" and notes that not all atheists are "eco-friendly." To tackle climate change, the party lists "practical steps" which include "encouraging repentance of previous abuse", seeking "God's blessing on the world" and avoiding the waste of food. "Ecological balance is biblical", they say.

Their full manifesto can be read here.

The website of the Communist Party is "committed to secularism" and argues that "religious institutions shouldn't play a role in the state and vice versa." The party says that it is not anti-religious, and notes that many of its members are "ministers of different denominations and religions."

They explain: "Despite the fact that modern British society is very secular, it's institutions aren't. The Church of England is still the official state religion and has its own unelected representatives in Parliament. Communists argue that religious belief should be a matter for the individual. A socialist Britain would be one that celebrates and recognises the diverse traditions and beliefs of the peoples' of Britain, guarantees the freedom of religious belief and worship for all without having any institutionalised privileges for any one religion or church."

Left Unity would "end the charitable status of fee-paying schools, and also withdraw state funding from schools or colleges which exclusively promote any one religious belief system, including Christianity, unless such establishments have an open, secular enrolment policy."

The party proposes abolishing the House of Lords and the monarch. Their manifesto argues that "the Church of England must be dis-established, its privileges ended and its wealth confiscated."

They state that "media myths have fuelled Islamophobia."

Their full manifesto can be read here.

Liberty GB promises a "zero tolerance" strategy toward Islam and "any Islamic practice that conflicts with traditional British laws or values."

They aim at "limiting the size of the Muslim community and preventing political Islam from gaining influence. This is essential to ensure a peaceful future and preserve our way of life."

Liberty GB vows to "enact a law of sedition specifically aimed at eradicating Islamism, and re-classify acts of terrorism as treason. Treason will carry the possibility of the death sentence for all those involved. Both will carry a sentence of possible expulsion from the UK."

"No infringement of British law will be tolerated or ignored for the sake of 'community relations'. Religious or cultural norms and values will no longer be considered as mitigating circumstances to gain a light sentence or as a reason to evade prosecution."

The party would prohibit Muslims from holding public office.

Their full manifesto can be read here

The Monster Raving Loony Party has quite a short 'manicfesto' online this time, which includes making unicorns a protected species. If new policy is forthcoming, we will update this post.

A Wessex Regionalist Government promises to "phase out religious involvement in publicly-funded education" and to "return control of education policy and funding to local councils."

You can read our blog about the major parties manifestos here.