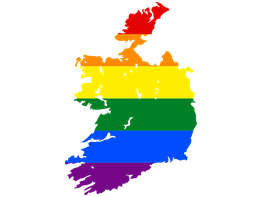 The Roman Catholic Church in Ireland has threatened to stop civil marriage registration if Irish law is changed to allow same sex marriages. Keith Porteous Wood argues that if it were to carry out its threat, it could inflict more harm on the Church than any change of the legal definition of marriage would.

On 22 May Ireland looks set to join the relatively few countries that have legalised same sex marriage.

Catholic bishops have threatened to stop civil marriage registration if this happens. So far their threat has failed to dissuade the Government, but if it were to carry out its threat, it could inflict more harm to the Church then any change of the legal definition of marriage would.

Their threat was originally made in 2013 by the Irish Catholic Bishops' Conference in a submission to the Constitutional Convention on the topic: "... if there were two totally different definitions of marriage the Church could no longer carry out the civil element".

It didn't work. Despite the Church's opposition, the Constitutional Convention, comprised of parliamentarians and members of the public, came out heavily in favour of same-sex marriage. The matter has been put to a Referendum to be held on 22 May (2015).

Will the threat be carried out in the event of the Referendum being passed? Martin Long, spokesman for the Bishops' Conference, has failed to rule this out, saying that "it is reasonable that the bishops may decide" that priests will not solemnise marriages on behalf of the State.

Polls show around three quarters of the population say they will vote affirmatively in the Referendum, and – extraordinarily – all political parties support change, too, including those who have traditionally supported the Church. Institutional opponents of changing the law are more or less limited to the Church, other religious groups and a recently formed pro-family organisation. Admittedly the most enthusiastic supporters, the young, are the ones less likely to bother voting and some opponents may have felt embarrassed to admit their opposition to the pollsters, but it would be astonishing if the yes vote did not win the day.

If the Church continues to press its threat it will be taking a much bigger risk than it did making its threat to the Constitutional Convention. Its stance could be characterised as "unless the Government refuse to permit same sex marriage, regardless of the will of the people, it will make marriage for Catholics more complicated and expensive".

It is not that long ago that the Republic's Government was for all practical purposes a Department of the Church, or was it the other way around? This played a large part in Ireland's shameful history on clerical child abuse. In 2011 even the Catholic Herald ran what would until then have been an unthinkable headline. Taoiseach (Prime Minister) "Enda Kenny's attack on the Vatican reflects ferocious public anger" over child abuse. And while there is some way to go, a great deal has changed in relation to how the Church is regarded in Ireland. Not all has entirely changed for the better, a great deal has. Such posturing as this threat raises questions as to whether the Church has woken up to this.

And as the pressure group Atheist Ireland has asked, why is the Church making this threat on the basis of a redefinition of marriage to include same-sex couples, when it did not do so for the inclusion of divorcees? Certainly it is not because of the numbers were insignificant. The number of divorcees rose by over 150% between 2002 and 2011.

The answer is probably that they think, probably wrongly now, that they can get continue to get away with bashing gay people, as they have done for centuries, but as they have learned the hard way, obstructing divorce is deeply unpopular. Three quarters of Irish Catholics say that the Church's teaching on sexuality is not relevant to their lives, according to a survey by Amarach Research. This also shows the Church cannot take for granted support even from those who do attend mass.

Another reason why the Church pushing this threat again would seem even more foolhardy and arrogant is that the percentage of weekly church attendance in Ireland has declined by two thirds in 40 years, and indeed by a third between 2010 and 2011. Much of the reduction has been a reaction to clerical child abuse and the Church's acquiescence of it.

The National Secular Society is keen, however, to encourage the Church to carry out its threat to stop civil marriage registration. Having a separate civil ceremony, as happens in France, emphasises the legal importance of the marriage and leaves no ambiguity - as is starting to happen in minority faith marriages in Britain - as to whether religious marriages are also civil ones recognised by the state.

The threat not to carry out these civil formalities is ironic given that the Church internationally has fought long and hard to have its marriage ceremonies recognised as civilly valid and even had this stipulated in some concordats, e.g. in Poland, the (sometimes secret) treaties between the Vatican and numerous states to bind them to adopt Catholic doctrine and financially benefit the Church.

Were the Church to carry out its threat, however, it would run the risk that couples would in protest at this move and the reasons behind it, or simply for reasons of expediency, abandon Catholic marriages - contributing further to the decline of Catholic marriage and mass attendance.

The fight the Church has picked with the State is a high-stakes one, and one the Church seems unable to win, whatever happens. If the Referendum succeeds, the Church's authority will be badly dented, given its no holds barred opposition will have been seen to be ignored. Even were the Referendum to be rejected, the Church would probably be blamed for it by the majority of the population.

Maybe sanity is starting to prevail however and Long's equivocal statement is the first stage of a damage limitation climb-down. Just last month the Catholic Archbishop of Dublin was calling for a calmer, respectful debate on same-sex marriage - hardly fighting talk, and the bishops stopped short of calling on Catholics to reject the Referendum. A spokesperson for the Association of Catholic Priests referred to a wide range of views among its members thought the Church would balk at making it more expensive and difficult for couples to marry; there are very few civil registrars.

If the Referendum passes, Ireland will become the 18th country, as well as some US states, with same-sex marriage. It would be the first to do so in a national referendum and to guarantee such marriage in its constitution. Not bad progress, given homosexuality was only decriminalised there in 1993; and the Civil Partnership Act passed in 2010.

Until now Ireland has been known for extreme conservatism on ethical issues, thanks to the stranglehold of the Church on politics and until recently probably the highest church attendance in the western world. Consequently, abortion law there is one of the most restrictive, leading those seeking abortions to travel to Britain, if they can afford it. The majority of the Irish population want some liberalisation of the law and if this Referendum is passed, it would be surprising if they were not emboldened to demand it.